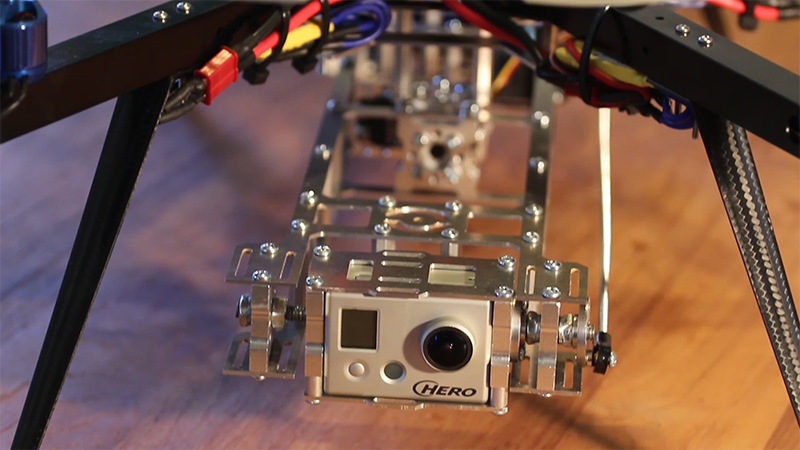 Thanks to everyone for your awesome input on our first post! Several of the tips we received have had a strong influence on our development path. We are already working on a radical redesign for our Mark III prototype that will incorporate some of your suggestions.

Where we left off:

Our last prototype had some semi-successful results. Mark I, which we now refer to as the “Tank” was much too heavy. After stripping it down we were able to get it into the air and shoot some decent footage. However, flight control was sluggish and somewhat unpredictable.

So we designed Mark II “Skeleton”

For this version we made several major changes to the design:

Before we designed our new “skeleton” frame, we performed some rigidity testing on 1/16” aluminum. We found that as long as we kept support spacers within 3.5 inches of each other, 1/16” aluminum would be rigid enough to support the gimbal.

We also did some testing to determine optimum GoPro placement. We found that in order to maintain a clear field of view with the widest angle video setting, the GoPro could safely be placed nine inches from the center of the copter. This allowed us to shorten the entire frame by three inches. We also refined our gimbal balancing approach.  In Mark I “Tank” we tried to selectively cut out metal to balance the gimbal.  Ultimately we had to add a stack of washers onto the back in order to balance everything out. We felt that this was not an elegant approach and the washer stack was rather ugly. So we removed the extra metal, and then designed several compartments for washers. This gave us more flexibility in balancing the gimbal while maintaining our design aesthetic. 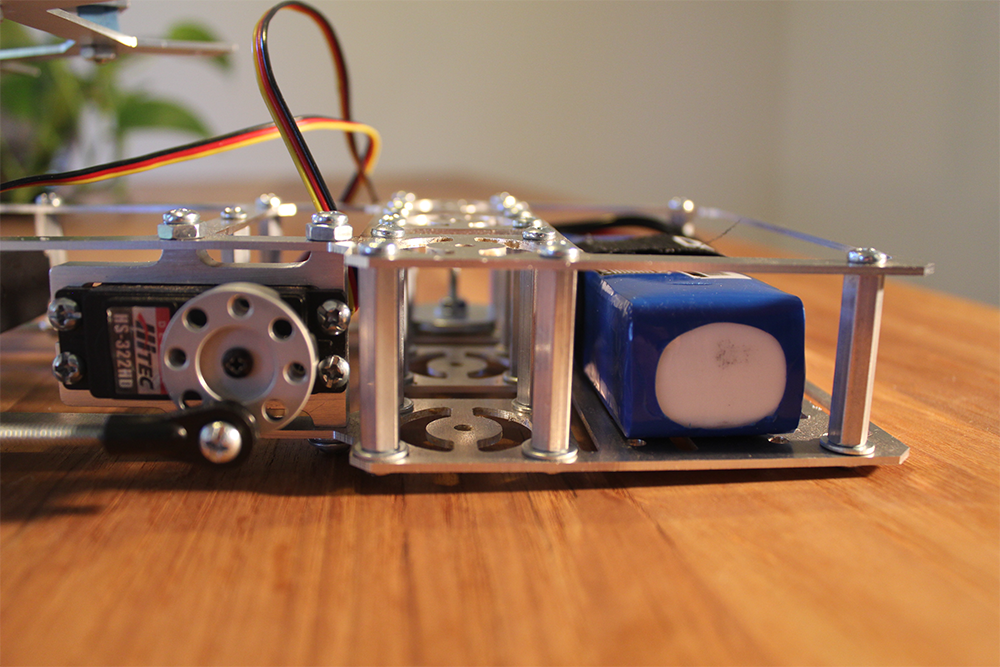 On Mark I “Tank” we placed our vibration mounts close together. This created an unintentional joint and the gimbal had a fair amount of play which caused a swaying motion in flight. In response to this problem, we decided to spread out the vibration mounts. This greatly simplified the way our gimbal attached to the Hexa frame by allowing us to remove several heavy aluminum plates. As many of you pointed out, moving the battery onto the gimbal is a much more efficient use of weight for balance. Coincidentally our 7 ounce battery approaches the weight needed to balance the GoPro carriage on the opposite end of the gimbal. This also allows us to keep more weight below the vibration mounts while lightening the overall payload of the Hexa. With all of these changes designed into Mark II “Skeleton”, we sent it off to be cut out of 1/16” aluminum!

Our machinist was gracious enough to send us some pictures of the CNC Router used to cut our gimbal parts.  In the image below you can see the cut marks from our plates in the backboard. There are some more pictures and info about CNC Routers on our blog here. 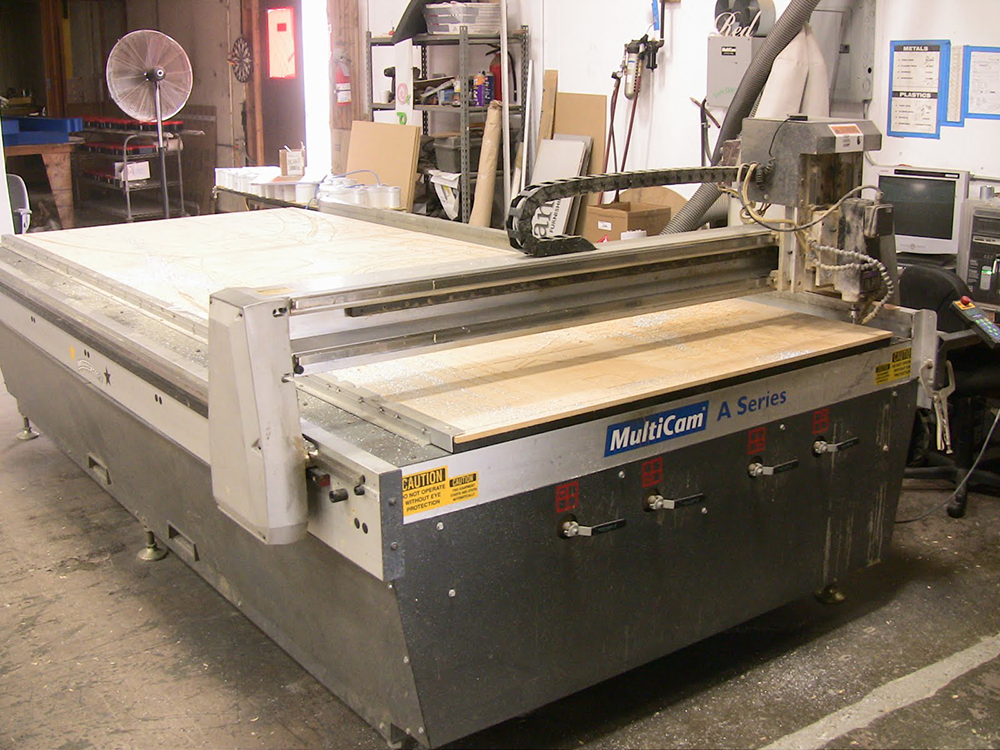 When we took to the air it was immediately apparent that the Hexa could easily handle the new payload weight and maneuver smoothly.

How was the flight and footage? Check out this video and see for yourself. Please Note: This video showcases clips from the GoPro that are unprocessed, as well as clips that have been processed. The processed and unprocessed clips are indicated by text in the upper right corner.

As you can see, we were able to fly for a reasonable amount of time with this payload weight. We were airborne for around 6 minutes and still had some charge left on the battery.

The level of vibration in the footage was encouraging. We put 2 clips through the Adobe After Effects Warp Stabilizer filter in an effort to easily identify the “jello” distortion in our footage.  We were pleased to see that there was little to no distortion present. We appear to be isolating the GoPro from the high speed micro-vibrations generated from the spinning motors.

Our footage is still suffering from some macro-vibrations. We believe there are two main  issues. First we need to balance the props and design some new mounts that will dampen the motors vibrations directly. We have noticed some warbles in flight even when the gimbal is not attached.

Second, we need to look into fine tuning the servo response time. We’ve noticed a rocking action in the video when the Hexa quickly accelerates from side to side. It appears to be a result of servo latency.

What we’ve learned from this prototype:

Where are we now?

True to form we are ready to confront our next challenges.  We are already designing our Mark III prototype. For this next iteration we are considering a radical redesign:

On our first post, several commenters suggested moving the pitch rotational axis from the GoPro Carriage to the center of the gimbal. We have been looking into this option and believe that it may help us in several ways.

Firstly we can get rid of a lot of the hardware needed to rotate the GoPro carriage. Secondly it will allow us to drop the “H” frame and go for a much simpler “I” beam shape. Thirdly, as several commenters pointed out, this puts our axis on the balance point, which means gravity will contribute towards keeping the gimbal level.

While we’ve been very happy with the ServoCity parts, they do add a significant amount of weight. Our new goal is to design a direct drive system that is strong enough to support the chassis so we can disregard the heavy aluminum servo blocks.

We’ve also learned that isolating the gimbal alone will not solve all of our problems.  This is why we’ve decided to design some anti vibration motor mounts in an effort to attack the problem at its root. Hopefully our mounts will provide the solid, rigid mounting needed for the motors while providing some vibration isolation for the Hexa frame.

We are in the process of investigating some of the materials that were suggested to us by the commentators of our first post. We are very interested in Garolite G10 as it looks to have the strength-to-weight characteristics we are looking for without the high price of carbon fiber.  However, it’s more practical for us to continue building our prototypes with Aluminum for now.  Once we are satisfied with the functionality of our design we may experiment with Garolite.

We are also considering the addition of a neutral density filter for our GoPro. As we have been researching the reduction of video distortion in GoPro footage, we have come across several references to that fact that the “jello” effect is less severe on cloudy or darker days. This is something we have seen in our own footage as well.

If you are interested, have a look at our blog post: Neutral Density For The GoPro in which we go into more detail about our hypothesis and how ambient light levels augment rolling shutter distortion.  We’ve summed up our theory below. Unfortunately we’ve been unable to find any concrete information on the subject.  If anyone can provide some additional input we will be greatfull!

The GoPro uses a CMOS sensor which scans through the entire frame at a fixed rate. This means there is a fixed amount of time required to read the entire sensor. On a very bright day this could lead to a significant time gap between pixel sampling as the exposure time in that situation is very short. This would also lead to a very sharp exposure for each pixel. However, on a darker day the exposure is longer and each pixel is sampled for a longer period of time. This would increase the motion blur of the pixels and a reduction of time difference between pixel sampling. Both of those factors could cause the captured image to be more blended between pixels thus reducing the amount of “jello” distortion visible...

... One way to force the GoPro to use a longer exposure time on a bright day is to basically put sunglasses on it. A neutral density filter is a material that will reduce the amount of light that enters the lens without distorting the color of the image.

In an effort to test our theory, our next prototype will include the ability to insert neutral density filters of different F-stop levels onto the GoPro carriage.

Here is the part where we need your help!

We would very much appreciate any input and or experiences you can share with us regarding the following items:

Though we are very encouraged by the latest results of our test flight, our work on Mark II “Skeleton” has taught us a lot and we still need to refine and improve our design. We are now turning our efforts onto Mark III and look forward to sharing our progress with you soon.

We will continue to post our major milestones here on DIY Drones.  If you are so inclined, you can also keep up-to-date on our incremental progress via our blog: http://www.skyrisfx.com/mission-updates/