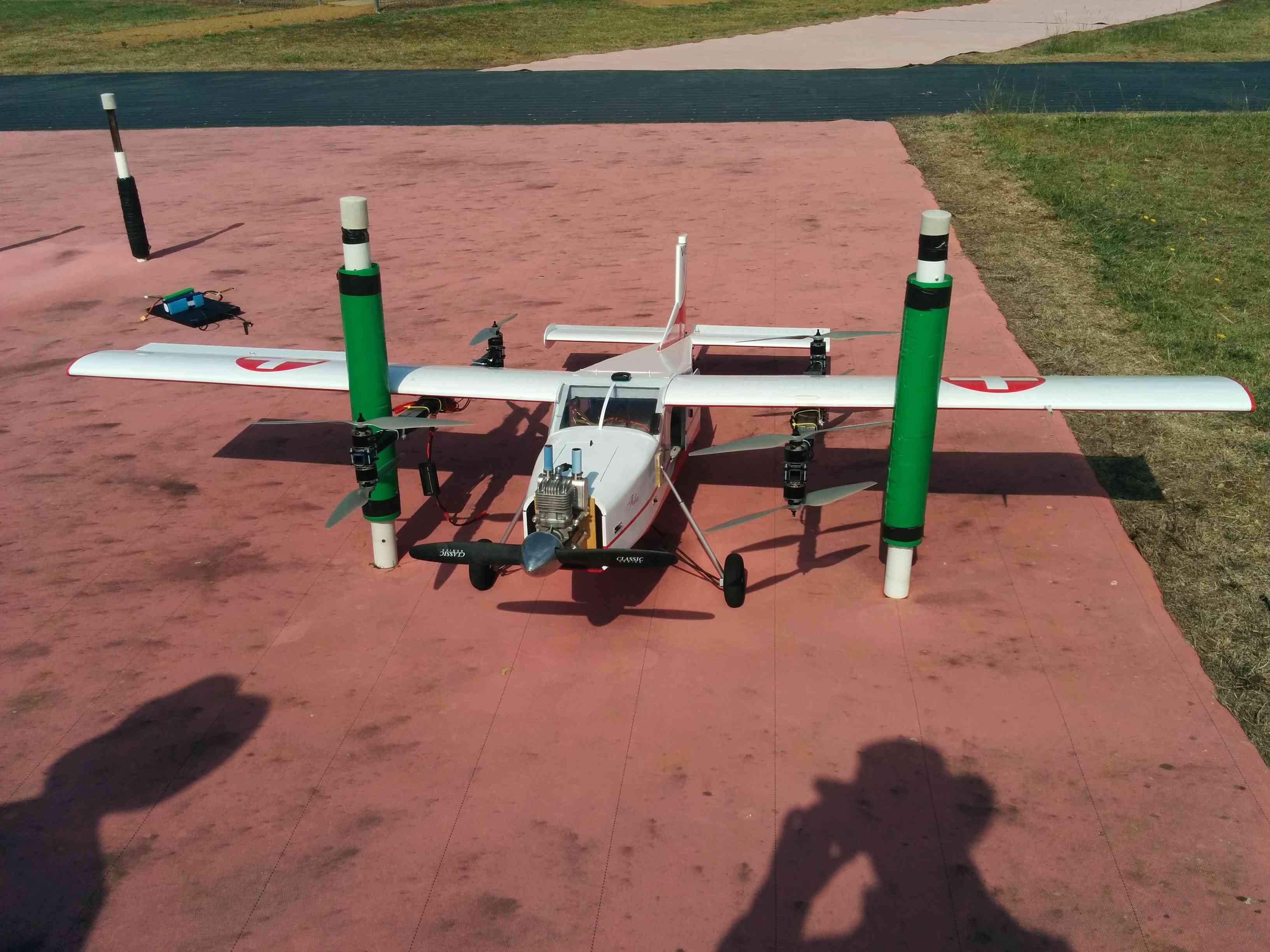 After the unfortunate crash of our last QuadPlane build with a failed ESC CanberraUAV wanted to build a new version with more redundancy in the VTOL part of the build. The result is the above OctaQuadPlane which we successfully flew for the first time yesterday.

When we were first designing a large QuadPlane we did consider an octa design, but rejected it due to what we thought would be a high degree of complexity and unnecessary weight. Needing wiring for both 8 vertical lift motors plus 4 controls for fixed wing flight, and extra controls for ignition cut and auxiliary functions like remote engine start, choke and payload control we worked out we'd need 15 PWM outputs. The Pixhawk only has 14 outputs.

After the failed ESC on the previous plane lost us the aircraft we looked again at an octa design and found that it would not only be possible, but could potentially be simpler for wiring than our last aircraft and be lighter as well, while having more lift.

To start with we looked for motors with a better power to weight ratio than the NTM Prop Drive 50-60 motors we used on the last build. We found them in the t-motor 3520-11 400kV motors. These very well regarded motors have a considerably better power to weight ratio, and back-to-back mounting of them was extremely simple and light with the above clamping arrangement.

To manage the complexity of the wiring we added support in ArduPilot for high speed SBUS output, and used one of these SBUS to PWM adapters embedded in each wing:

that allowed us to have a single wire from a Y-lead on the SBUS output port of the Pixhawk going to each wing. We modified the BRD_SBUS_OUT parameter in ArduPilot to allow setting of the SBUS frame rate, with up to 300Hz SBUS output. For a large QuadPlane 300Hz is plenty for multi-rotor control. 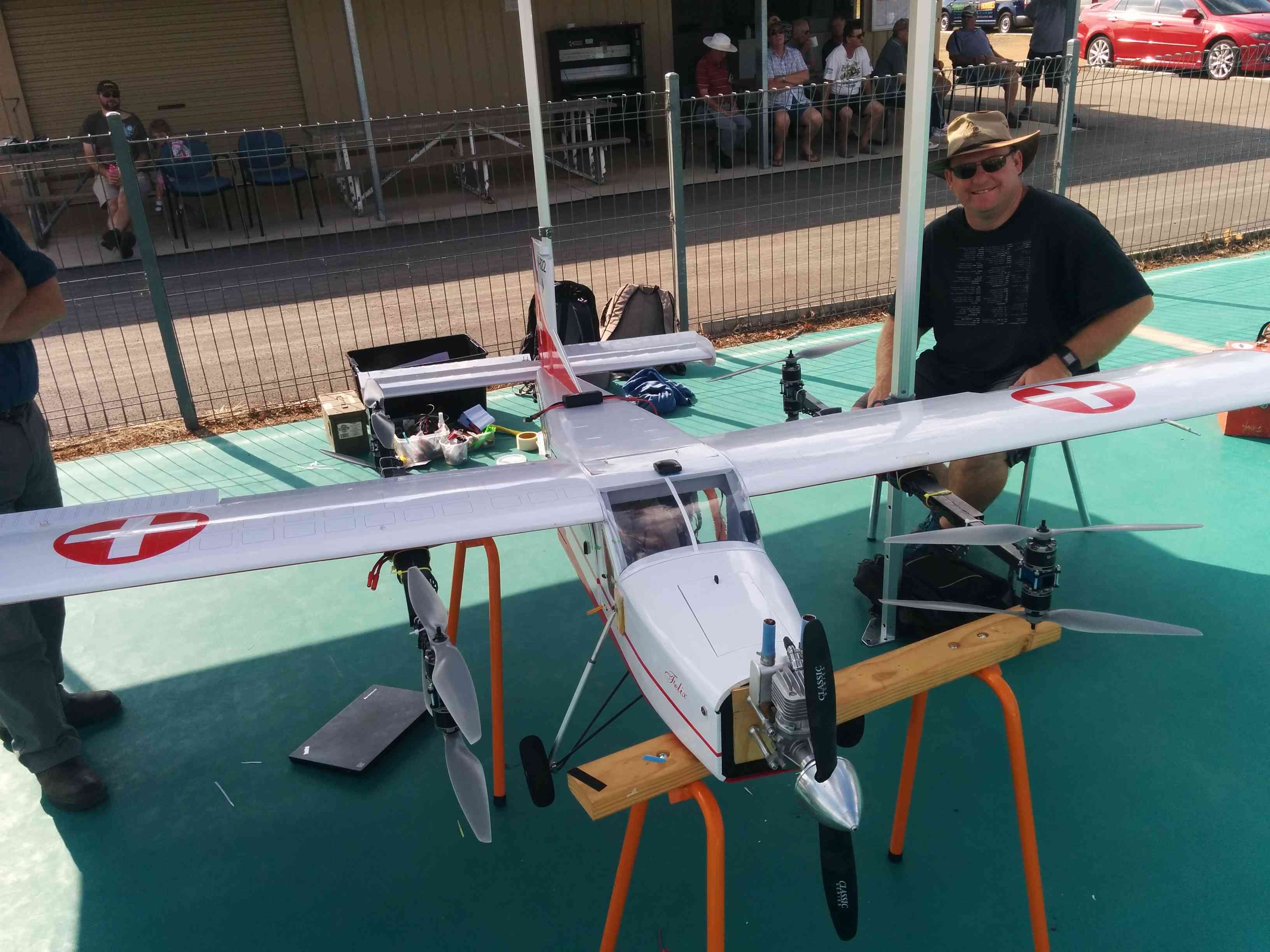 The arm mounting system we used was the same as for the previous plane, with two 20x20x800 CF square section tubes per wing, mounted on a 300x100x1 CF flat plate. The flat plate is glued to the wing with silicon sealant, and the CF tubes are glued to that plate with epoxy.

For ESCs we used the HobbyWing 40A, which has a burst rating of 60A. That is well above our expected hover current of 15A per motor. Combined with the redundancy of the OctaQuad and the better reputation of HobbyWing ESCs we were confident we wouldn't have a repeat of our previous crash. 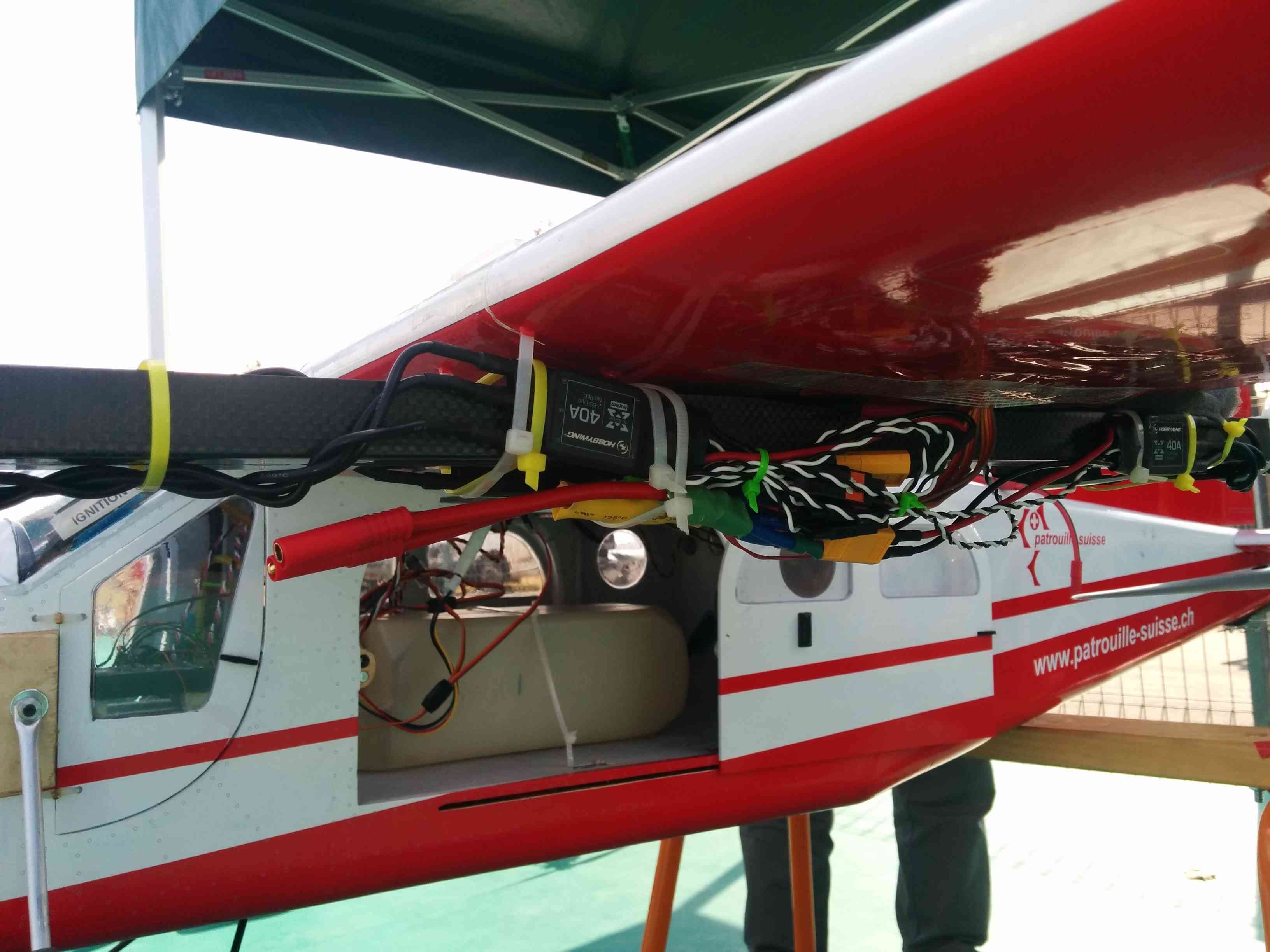 For batteries we switched to 6S, using one 5Ah battery per wing. That gives us over 4 minutes of hover flying time while keeping the weight well below our last build (thanks largely to the lighter motors and ESCs).

For this initial test flight we had the fuel tank mounted horizontally unlike the previous vertical arrangement. This was OK as we only filled it a small amount for these test flights. We will be converting to a vertical arrangement again for future fights to reduce the impact of fuel slosh causing CoG oscillations. We may also fill it with fuel anti-slosh foam as we have done on some other aircraft (particularly the helicopters).

Overall the build came out about 1.5kg lighter than the previous build, coming in at 12.5kg dry weight. With a full load of fuel we'd expect to be about 13.5kg.

We did three test flights yesterday. The first was just a quick hover test to confirm everything was working as expected. After that we did the first transition test under manual control, which worked very nicely.

The copter part of the tuning could definitely do with some work, but we thought it was stable enough to do a full auto mission.

It was a short mission, with just two full circuits before landing, but it nicely demonstrated autonomous VTOL takeoff, transition to fixed wing flight, transition back to hover and auto landing. The landing came in within a meter of the desired landing point.

We had set the distance between the transition point and landing point a bit short, and we hadn't included a mission item for the plane to slow down before it transitioned which led to a more abrupt transition than is really good for the airframe. Going from 100km/hr to zero over a distance of 77 meters really puts a lot of stress on the wings. We'll fix that for future missions. It is nice to know it can handle it though.

The transition to hover also caused it to climb a fair bit which meant it spent more time in VTOL landing than we would have liked, chewing through the battery. That was caused by it having to pitch up to slow down enough to achieve the stopping point in the mission which caused it to climb as it still had a lot of lift from the wings, combined with a high angle of attack. It didn't help that we had a slow slew rate on the petrol motor, reducing the motor from full throttle to zero over a 3 second period. We chose a slow slew rate to reduce the chance of the engine cutting due to fast throttle changes. We can fix that with a bit of engine tuning and a longer transition distance - probably 130 meters would work better for this aircraft.

The climb on transition also took the aircraft into the sun from the pilots point of view, which isn't ideal but did result in a quite picturesque video of the plane silhouetted against the sun.

The full flight log is available here if anyone wants to see it. The new features (new SBUS output support and OctaQuad support for quadplanes) will be in the 3.5.1 plane release.

We're not done yet with QuadPlanes. Jack is building another one based on the Valiant, which you can see here next to the Porter: 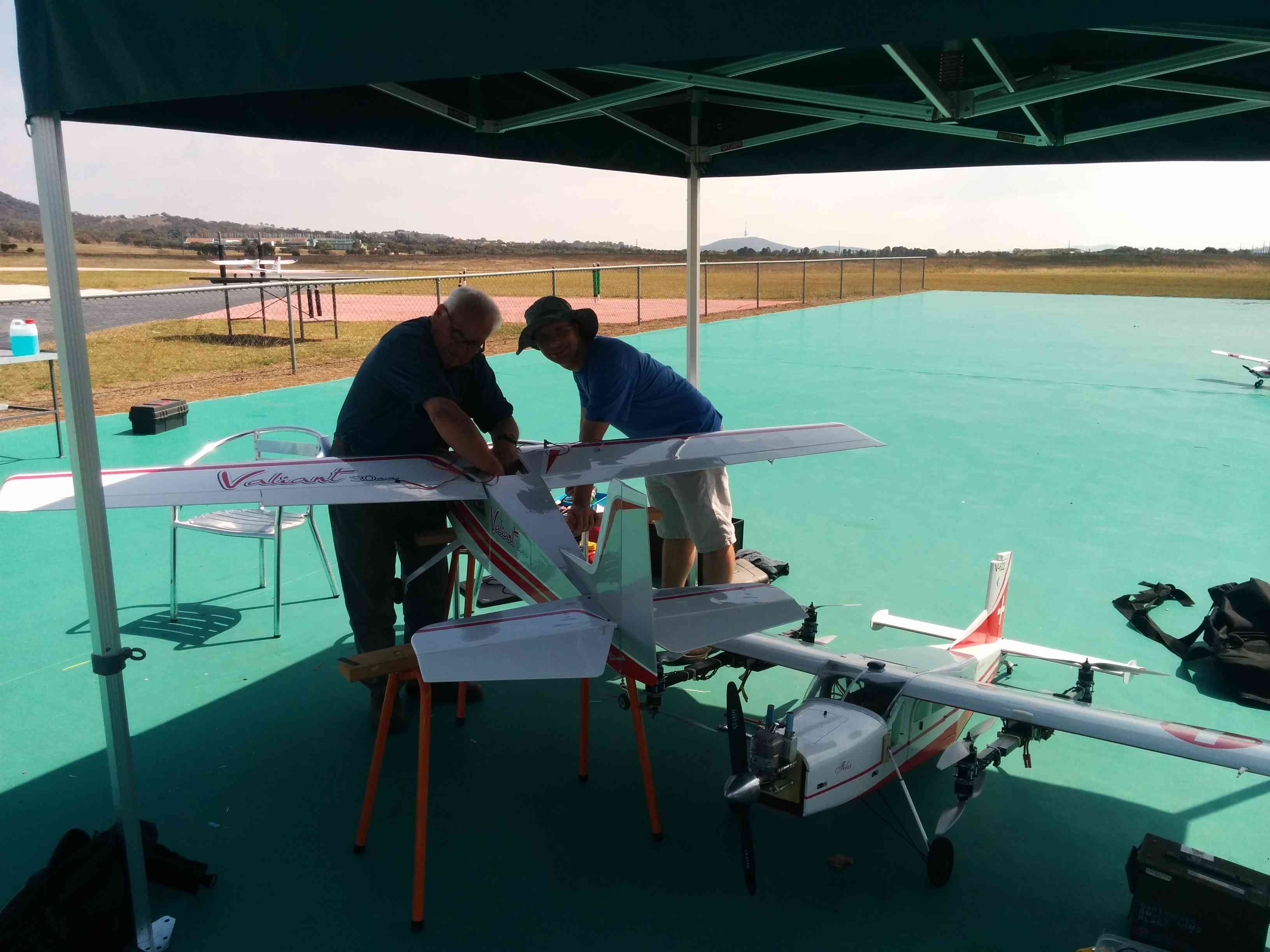 Combined with the GX9 tradheli build that Greg has put together: 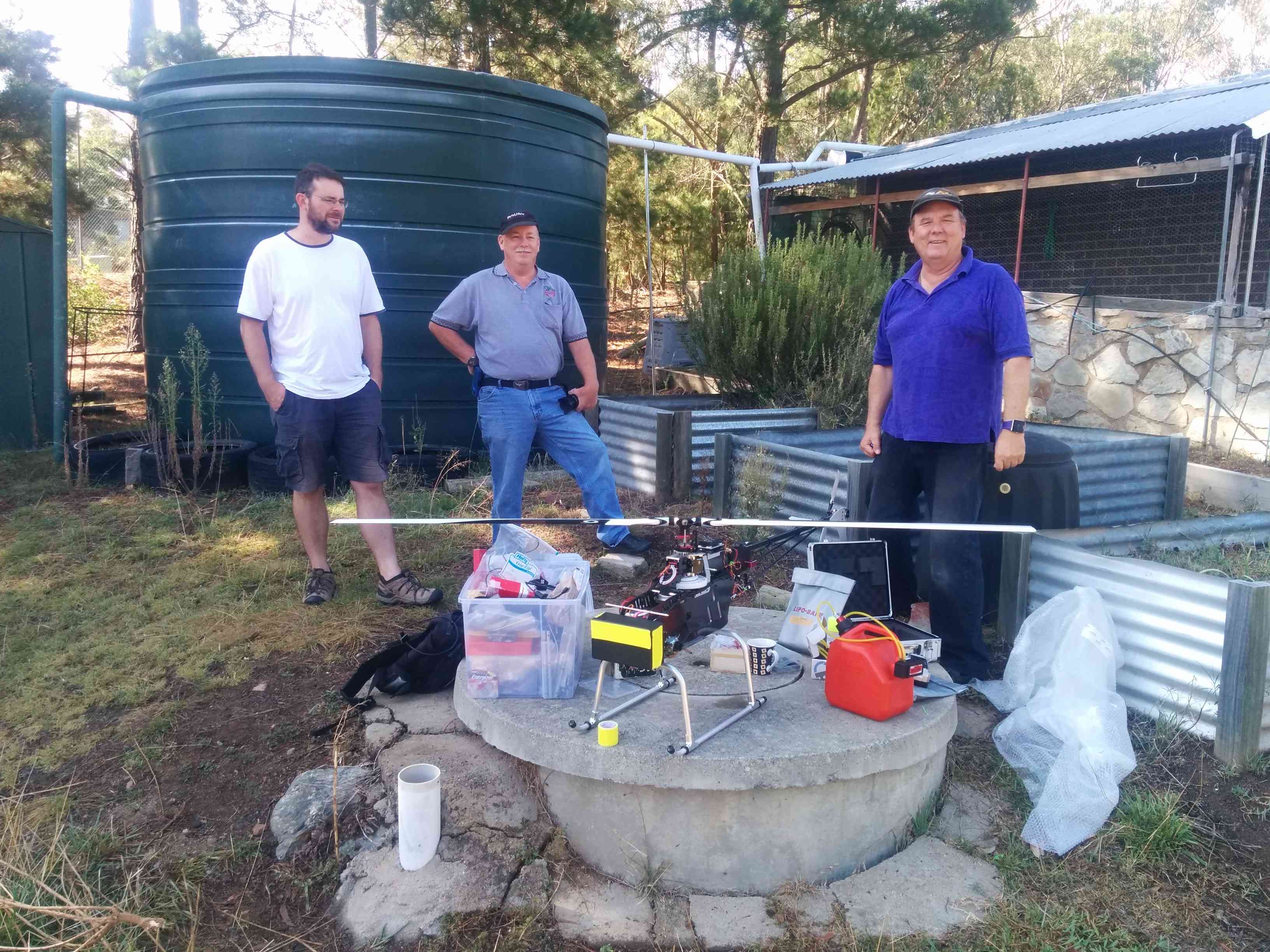 we are all set for lots of VTOL fun!

Many thanks to everyone who helped with the build and as always to CMAC for providing a great flying field!