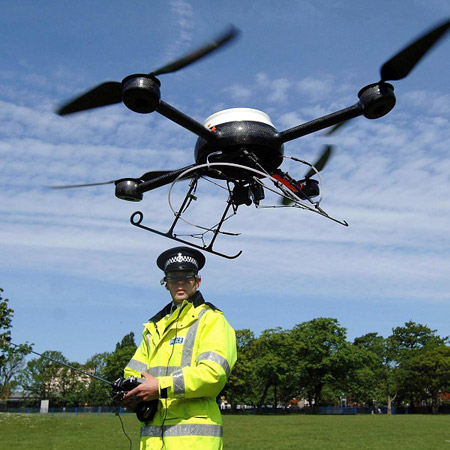 Excellent article by Evan Ackerman at IEEE Spectrum. It's worth noting that in the US, at least, law enforcement already needs warrants to inspect private property beyond what would normally be visible from the street, to protect citizen's "reasonable expectation of privacy" in their own back yards:

Have you ever been spied on by a surveillance drone? No? Are you sure? Maybe it looked like a hummingbird. Or an insect. Or maybe it was just really high up. Maybe there's one looking in your window right now, and if so, there's no law that says it shouldn't.

In a recent article in the Stanford Law Review, Ryan Calo discusses how domestic surveillance drones would fit into the current legal definitions of privacy (and violations thereof), and how these issues could inform the future of privacy policy. The nutshell? Surveillance robots have the potential to fundamentally degrade privacy to such an extent that they could serve as a catalyst for reform.

Domestic surveillance robots aren't as much of an issue now as they could be, thanks mostly to the stick-in-the-muddedness of the FAA that keeps unmanned aircraft from doing anything exciting. But eventually, that's going to change, and there are already precedents (legal ones) for how domestic agencies might (read: will) start using robots. Basically, there seems to be essentially no legal restrictions which would prevent the police from having drones flying around all the time, watching people.

Clearly, this is something that we as a society should discuss, and we may decide this kind of surveillance should be illegal, or at least restricted to some extent, especially since it's getting easier and easier to build or buy camera-capable flying robots. In the near future, celebrities (like me) will be constantly surrounded by a swarm of face-reading, photo-snapping autonomous robots that will necessitate the development of anti-surveillance drone drones, loaded up with little miniature air-to-air missiles, which themselves are little flying robots.

Of course, all this goes beyond surveillance and drones. We've got these same sorts of legal issues popping up all over the place with regard to to robotics, as technology fast outpaces the limited amount of foresight that was employed when coming up with policies meant to manage current technological issues as opposed to future ones. And as we've mentioned before, there's a risk that reactionary (as opposed to proactive) policies could seriously undermine the robotics industry, which is why forethought is so important.

You can read the rest of Ryan Calo's article, "The Drone as Privacy Catalyst," at the link below.