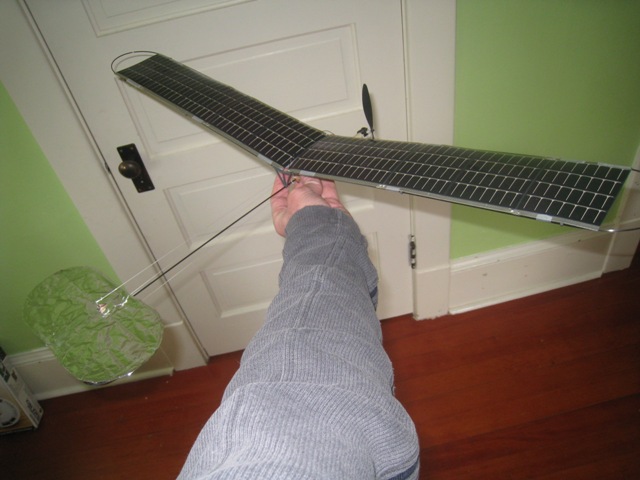 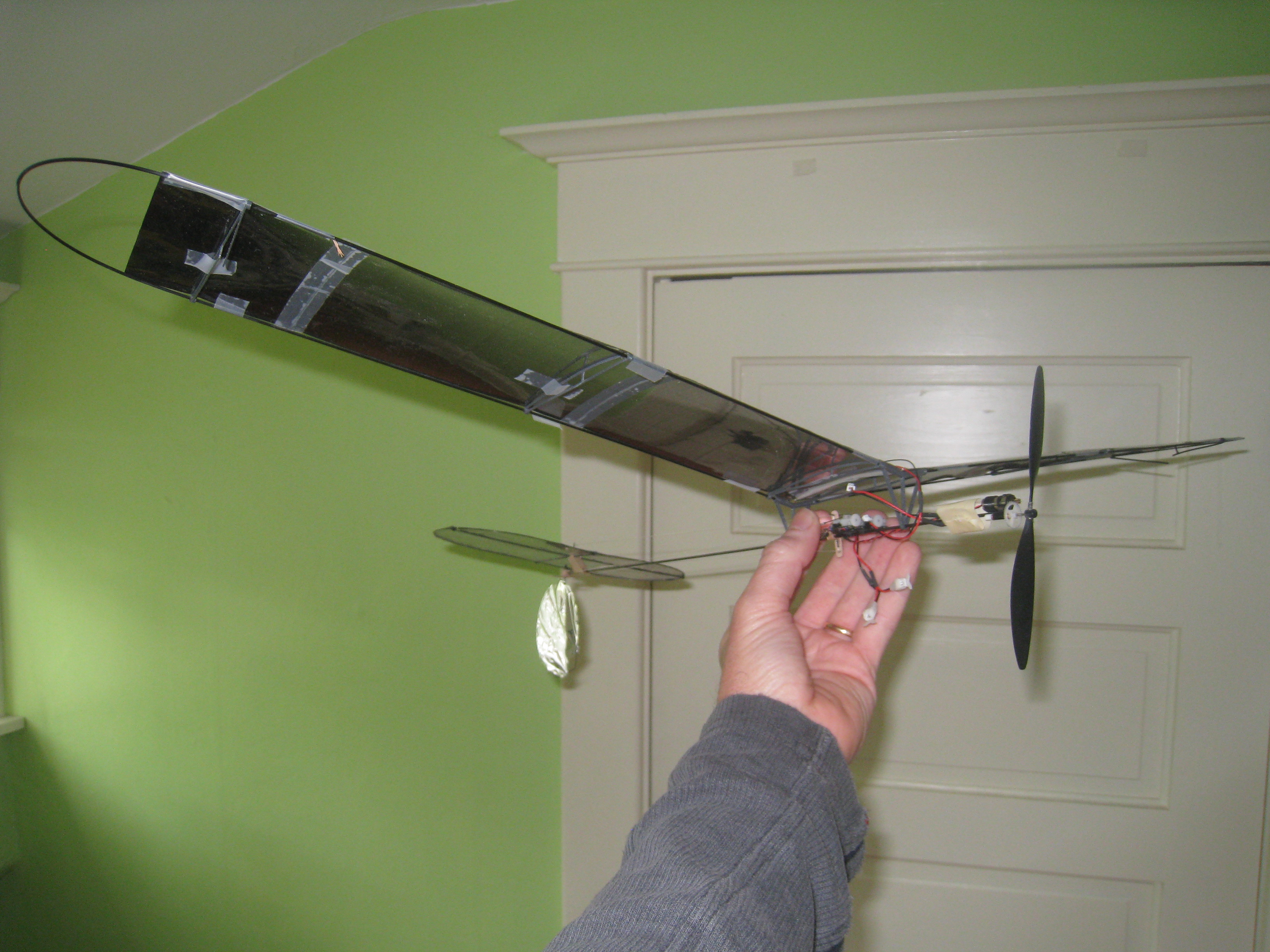 I have been tinkering with solar powered RC planes this summer. The photos above shows the latest incarnation.

This model uses the Parkzone Vapor's radio gear and motor ( http://www.parkzone.com/Products/Default.aspx?ProdID=PKZ3380 ), plus five Powerfilm solar cells ( http://www.jameco.com/webapp/wcs/stores/servlet/Product_10001_10001_228056_-1 ). The motor/prop are quite well matched to the cells, delivering about 2.5 watts in direct sunlight. Here are some test data: All up weight is 38g, 18g in solar cells. It has a tiny 20mAh battery (1g) in parallel with the solar cells that acts to smooth out the voltage. Before I flew, I ran the motor using battery power until the voltage dropped too low to run the motor, then I plugged in the solar cells. That way, when I flew, I knew I was really running on solar power alone. I flew it for about 5 minutes or so, but it was a pain to fly because the wings were too torsionally floppy. I am planning the next revision that should address some of this design's shortcomings.

There have been many successful solar airplanes. I found the following efforts particularly interesting because they are not military or NASA scale projects, and they are well documented.

Carl Engel and Adam Woodworth's (MIT) 3.1m Aphelion, which has flown over 7 hrs

In many applications, solar cell performance is measured by efficiency. In my experiments with the Powerfilm cells, I got about 70 watts per square meter. Using a fairly standard irradiance value of 1000 watts per square meter puts the cell efficiency at something like 7%. This is not particularly good compared to the state of the art (see e.g. http://en.wikipedia.org/wiki/File:PVeff%28rev100414%29.png).

The Aphelion uses an array of 18 A-300 Sunpower Solar Cells. The total encapsulated array weighs about 350 grams and can deliver 55 watts of power. These cells are reported to be upwards of 20% efficient. BTW, if you dig deep enough into the Aphelion thread referenced above, Carl reveals his secret supplier of these cells:

Also, here is the contact info for our solar array supplier, now that he has given permission for it to be posted. One note that he wants to be made clear: he is very busy, and it's a small operation, so there can be a serveral month lead-time on ordering an array. With that, here is his info:

SunCat Solar is the name of the comany, and our contact in Alain Chuzel(pronounced "Allen"). His email address is
ahmchuzel<at>aol<dot>com. (replace the <at> with @and <dot> with . )

He can fabricate pretty much any size or confguration of array, given a good drawing (and enough money

The weight of solar cells accounted for 47% of the total weight of my airplane. Therefore, I would argue that for a solar powered airplanes, an important performance measure of performance is watts per gram. I measured about 0.27 watts per gram for the Powerfilm cells. This compares favorably to the Sunpower cells at 0.16 watts per gram.

Some other attractive things about the Powerfilm cells is that they are reasonably priced, and readily available in small quantities. I have not contacted Suncat Solar to determine the cost/availability of the Sunpower cells.

I think it would be very cool to build a solar powered drone that could stay up all day, and possibly all night. My little airplane has essentially no payload capacity. Presumably, a larger airplane would be required to carry up a GPS, IMU, two way radio, etc.

As the airplane gets bigger, we have more area for solar cells, but the weight gets larger too. So how does the power budget work out with a bigger airplane? Here are some scaling arguments to help answer that question objectively.

g: acceleration due to gravity

The bad news is that as airplanes are scaled up, their weight usually goes up faster than their area, thus their wing loading goes up. Stated another way, bigger airplanes usually have higher wing loading than smaller airplanes given similar structural technologies.

The good news is that as we increase the size of the airplane, we can expect the LOD to improve. The LOD of my airplane is around 7. Doubling or even tripling this value should be possible ( see e.g. http://www.rc-soar.com/tech/perfanal.htm ). The wing loading of my airplane is 540g/m^2. If we double the LOD, we can increase the wing loading (WOS) to 850g/m^2 (i.e a factor of 1.58) and maintain the same power ratio.

Also, as we make the motor and propeller larger, we might expect an improvement in propulsive efficiency, meaning that we fly with a reduced power ratio.

Considering these factors, building a bigger solar airplane is probably harder than building a small solar airplane. Based on the successes referenced above, I must conclude that it is possible, but not easy (or cheap).