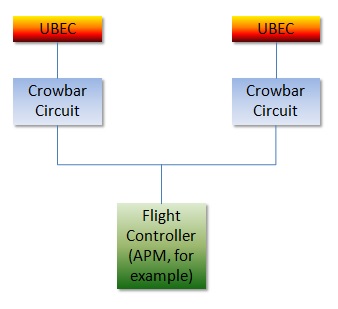 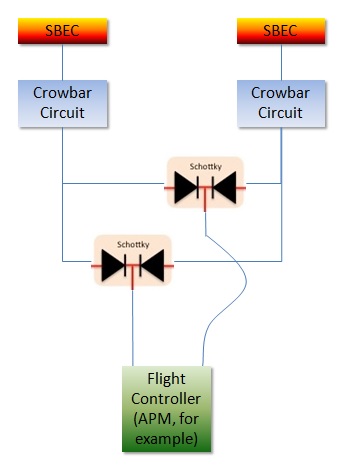 Hi, when i fly multirotors one of my main worries is to avoid it from crashing. Mechanically I've practically solved it because I usually fly an octocopter (motor, prop and ESC redundancy). My main concern right now is how to power the flight controller safely.

Initially I've connect all my 8 linear becs (in parallel) to my flight controller because I thought that if one fails, the rest would supply the required power. Later on I found out that a linear regulator may fail and may supply voltages higher than 5v and that would burn the flight controller.

A fuse is the easiest approach to solve this but I've read that sometimes it doesn't work well (fast enough). So i found the Crowbar Circuit. So, i would use 2 linear BECs for redundancy and the crowbar circuit after each of the becs so in case it fails it will not burn the flight controller:

I had the idea to use a switching BEC but i don't know if it's the best alternative. I've read that you cannot put 2 switching BECs in parallel because the voltage is generated in waves that may interference each other. So to solve this, one switching bec would be in use and if it fails, the backup switching BEC would take place.

The diagram for this is shown below:

If the SBEC number 1 fails, the Schottky diode would alternate to the SBEC number 2. I think that using 2 diodes would be better for the redundancy (i don't know if it's ok to do that). Could I use a relay instead of this diode?

What do you guys think? Will it work? Any idea is very welcome! ;D

Does anybody have the part list to do a crowbar circuit for the APM? I think it should supply 5v and 500mA, is that right?