I wanted to share my quad transport slash storage slash FPV groundstation for some time already..

Ordinary tool box, the biggest one from 3-in-1 special offer pack, €15.99 in local hobby store: 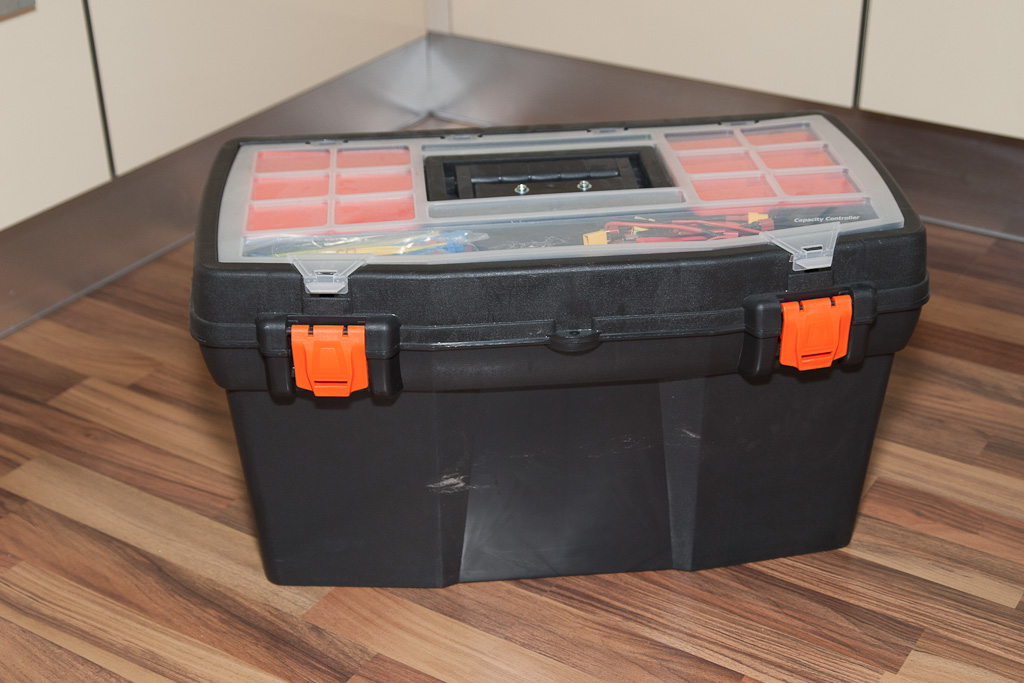 When opened, my quadcopter is folded inside with batteries, charger etc: 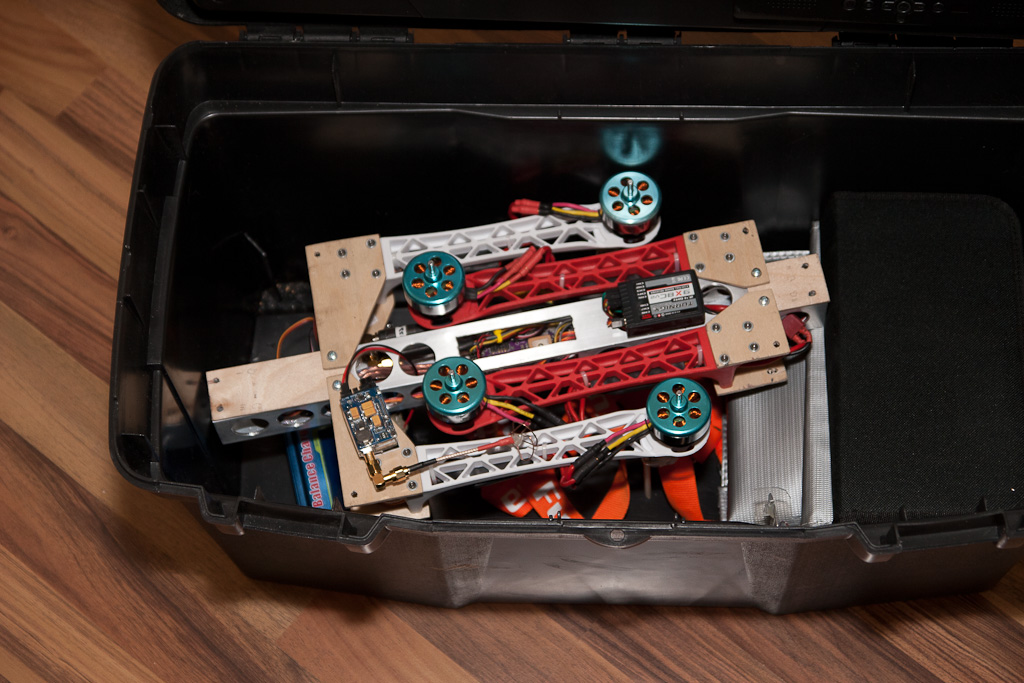 Plan is to have also the RC transmitter in the same box, there is still room for it. I will have to make some divider for it so it does not get all destroyed while being transported in a car.

This is how the copter looks unfolded: I have used flamewheel clone arms, some plywood (will use carbon fiber but I did not bother for now..) and aluminium square tube for the fuselage. The tube is drilled to save weight. Flight controller is in the mid section inside the fuselage. The unfolded arms are not locked in place on the picture so it looks a bit wobbly, but in fact it is quite stiff.. I used bamboo sushi sticks as landing gear to lift the frame so I can mount the camera on the bottom.

The frame is a bit on the heavy side, I will replace it with something lighter when I am in the mood.. But for now it works, and it does not look like flying spaghetti monster..

To the more interesting stuff now: I have used the removable compartment which came with the box to store my FPV gear. The compartment is locked to the lid with two screws and nuts and opens with the lid. While opened, it is held in place by 12AWG wire on the right-hand side: 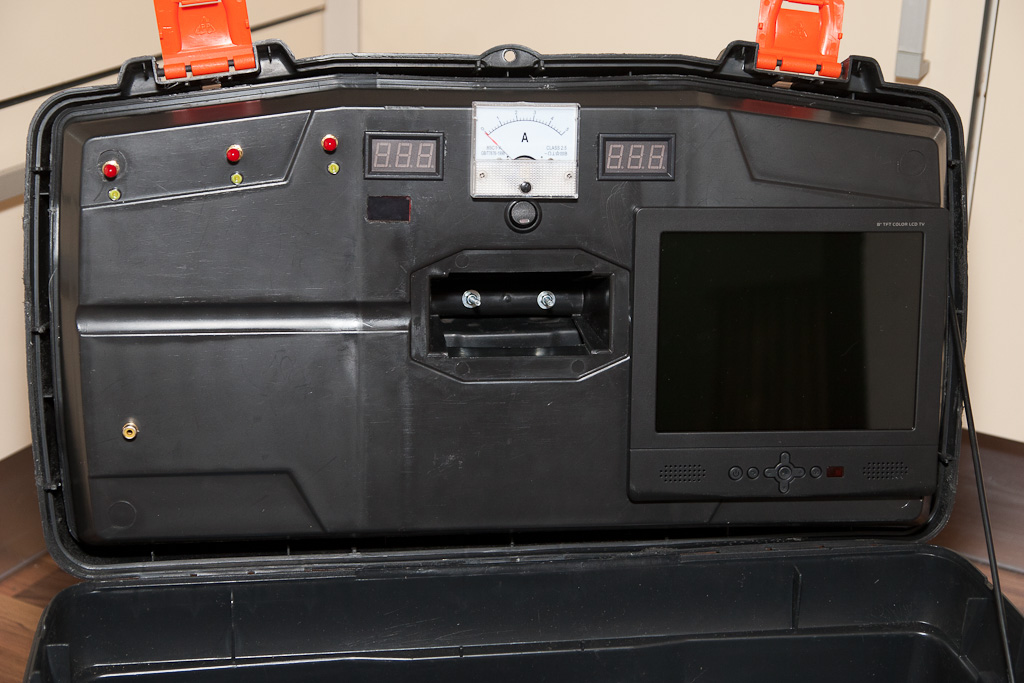 In the upper-left corner I have 3 antenna connectors - there are hidden 3 separate video receiver modules (cheapo 5.8GHz modules for some 12-14USD excl. postage), each with it's own antenna. There is RSSI comparator which I made using "standalone arduino" - just an Atmega168 chip mounted on prototyping board with 16MHz crystal, some capacitor and hidden spaghetti of wiring. Based on measured RSSI the comparator selects video signal only from receiver with the best quality, and sends only the best video output to the 8inch LCD TV. The TV was some 75 USD from dealextreme, I chose it because google told me that it switches to blue screen only when there really is little to no signal - on picture, the video transmitter was off. Signal switching itself is done by 74HC4052 multiplexer which is controlled by the arduino signal comparator. The nice thing is that it could be scaled up to 8 separate receivers with very little changes - maybe I will do it, once, but for now there was no place on the protoboard anymore :-)There is also composite video-out connector in the lower-left corner, to connect video goggles or recorder.

The whole thing runs of 3S LiPo (voltage on the right LCD). The video modules / comparator / signal selector all work on 5V, so there is hidden UBEC, and it's voltage is displayed on the left LCD. The current consumption is on the analog meter in the middle. It is there only because I really liked how it looks. I have no idea how accurate it is.

The little oled display just shows the measured RSSI values, and which receiver is selected. That is not really needed for the thing to work, but it was quite handy for debugging. You can also see which receiver/antenna is in use by the LED which is bellow the antenna connector. The 3 LEDs flash together while the video transmitter is off. 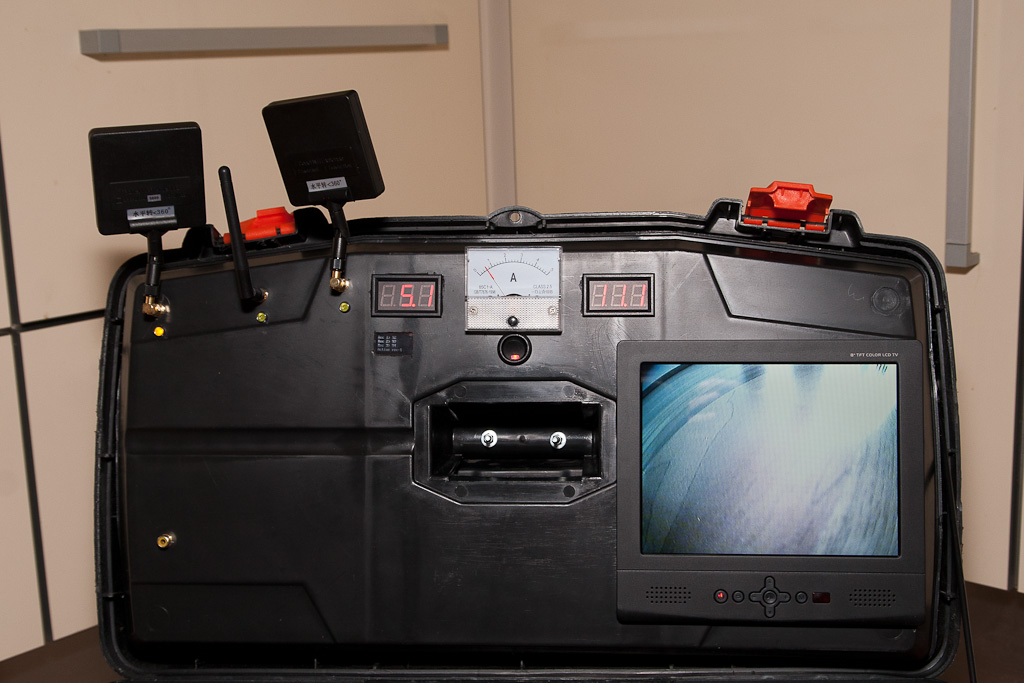 I wanted to make custom PCB to get rid of all the wires.. and maybe I will, eventually. But none of my friends would believe me then, that I made it myself, if it didn't look like a mess of wiring and hot glue :-)   Anyway, normally it is covered and not visible, and there is no stress on the wires, so I do not expect it to fail because of loose wire or connection.

To the end of this post I just want to say thank you all the nice people sharing the knowledge all over the internet - very little of all this comes from my own head - I found tons of material about video diversity receivers (I just don't know why people usually only combine two receivers - one omni and one directional.. the receivers are so cheap and it cost nothing to scale it up a little to get the little bit more land covered), I found many articles about standalone ardino, about video buffers, etc..  I just love the internet :-)

cheers, I hope I inspired someone to try something like this.