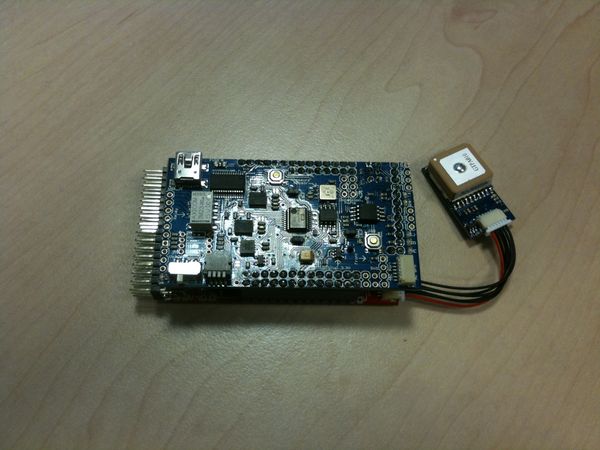 As a total newbie into the world of electronics hardware and software, I took the big step a few months ago of deciding to build myself a UAV. Actually, I decided to build myself a quadcopter after seeing what was to become the ArduCopter on Hackaday, but the dream changed and the desire for payload carrying overcame my initial desires.
Anyway, I ordered myself an Arduino board and set about going through the learning examples, having mixed success with my progress (more with software, less with hardware - I am truly useless with electronics after failing to learn even the most basic parts of it at school) until I finally decided to bite the bullet and buy the ArduPilotMega board and the oilpan from the UK's only stockist (or so it seems) http://www.coolcomponents.co.uk. A bit of soldering later (even I can't mess that up) and I had the basics working. I even managed to get my Mac to upload the code and talk to the system via the CLI. A few weeks (and another pay day later) and I had a complete MediaTek GPS system in my hands from across the pond. Another bit of soldering and my initial payload package was pretty much complete.

Then, a bit of luck! One of the new starters at work is into FPV and offered to donate one of his old airframes to my cause. Yes, it's battered. Yes, the nose is held on with black tape and the wings have clear tape reinforcing the [slightly broken] main spar. It might also have resin holding the tail section on, but it is still an airframe and it comes with servos and an ESC. So, what next?
Well, I have another heli flyer from work lending me an old six channel analog radio system when he can find it, and I need to source LiPos and a prop, but the most important thing I need to do is to try and fit the bits of the APM into the airframe. My current thinking is that it might involve a little bit of cutting, some hollowing out, and maybe the creating and attaching of a new nose section lovingly made from new foam. I'm also going to be spending a lot more time with the APM code, learning how to code it, and seeing if there is anything I can do to make it better. Already I have some ideas for a new airfame and some extra features, but that would take a lot more experience of coding than I have now to put together. I have time though, and I am learning. I just need to _not_ kill the APM chip, like I did the other day with the one on my Arduino dev board.
I'm hoping that this blog will serve as a memory to how I get on with the build, the initial testing and the more advanced things that I hope I will end up doing with the project. With any luck I'll be able to update it regularly with more successes than failures.
E-mail me when people leave their comments –
Follow