Hello everyone, I have received some questions in another thread regarding my large X8 build and I wanted to take a minute and share a project that my company has been working on for the last 18 months. We have put together a heavy lift X8 multicopter as well as a sprayer system for use in agricultural settings. This will be a long post so I apologize in advance!

First, a little background: I am an engineer with a small consulting firm specializing in electro-mechanical system design; most of my clients are in the aerospace or industrial robotics industries. About two years ago, I was approached by a large commercial vineyard and asked to develop a small, lightweight sprayer system that could be carried on a small UAV. The client already had a vendor that would supply the UAV, and we were to design, build, and deliver a working sprayer system that could be mounted to said UAV. Due to factors beyond the clients control, their vendor was unable to deliver the promised vehicle. My company stepped up and purchased an off the shelf T18 multicopter from a local vendor, and modified it to carry our tank system. Having worked on DoD UAS systems, but not being familiar with commercial products, there was a steep learning curve. Our T18 system was outfitted with KDE 5215-435 motors and KDE 75A ESCs. The autopilot was a DJI WKM (later I would learn that this autopilot was not a feature rich as the Pixhawk/Arducopter system). The tank system consists of two machined hemispherical caps, bolted to a center cylindrical section. This center section can be swapped out for a longer piece, and thus increase the volume of the liquid payload. There is also a baffling system inside the tank that prevents the fluid surge from causing issues with the flight vehicle. The requirements by the customer were for a 1 gallon payload, and the first tank was designed as a 1 gallon system. Since then, we have also designed a 2 and 3 gallon system.

The concept behind the sprayer is to use pressure to dispense the liquid in the tank, rather than having an electric pump on board. This pressure driven system has several advantages over a more conventional system, most notably significantly lower weight. In addition to being lighter than a comparable pump based system, the pressurized tank also has no parasitic electrical draw from the vehicle's flight battery. This means that we are able to get more flight time for the same amount of liquid payload. The liquid is released by triggering a solenoid valve; the valve is powered by a small 3S lipo. The spool on the solenoid is the only moving part in the system, and thus is very reliable.

The tank is filled on the ground via a fill station, which consists of a closed loop sump and pump system. This allows the operator to mix the product outside of the tank, and then fill the tank without being exposed to any pesticides or herbicides.

We used the sprayer tank system on our T18 octocopter for almost a year, in various locations and field conditions. We also received great feedback from the customers and potential end users. Several key points that we walked away with: 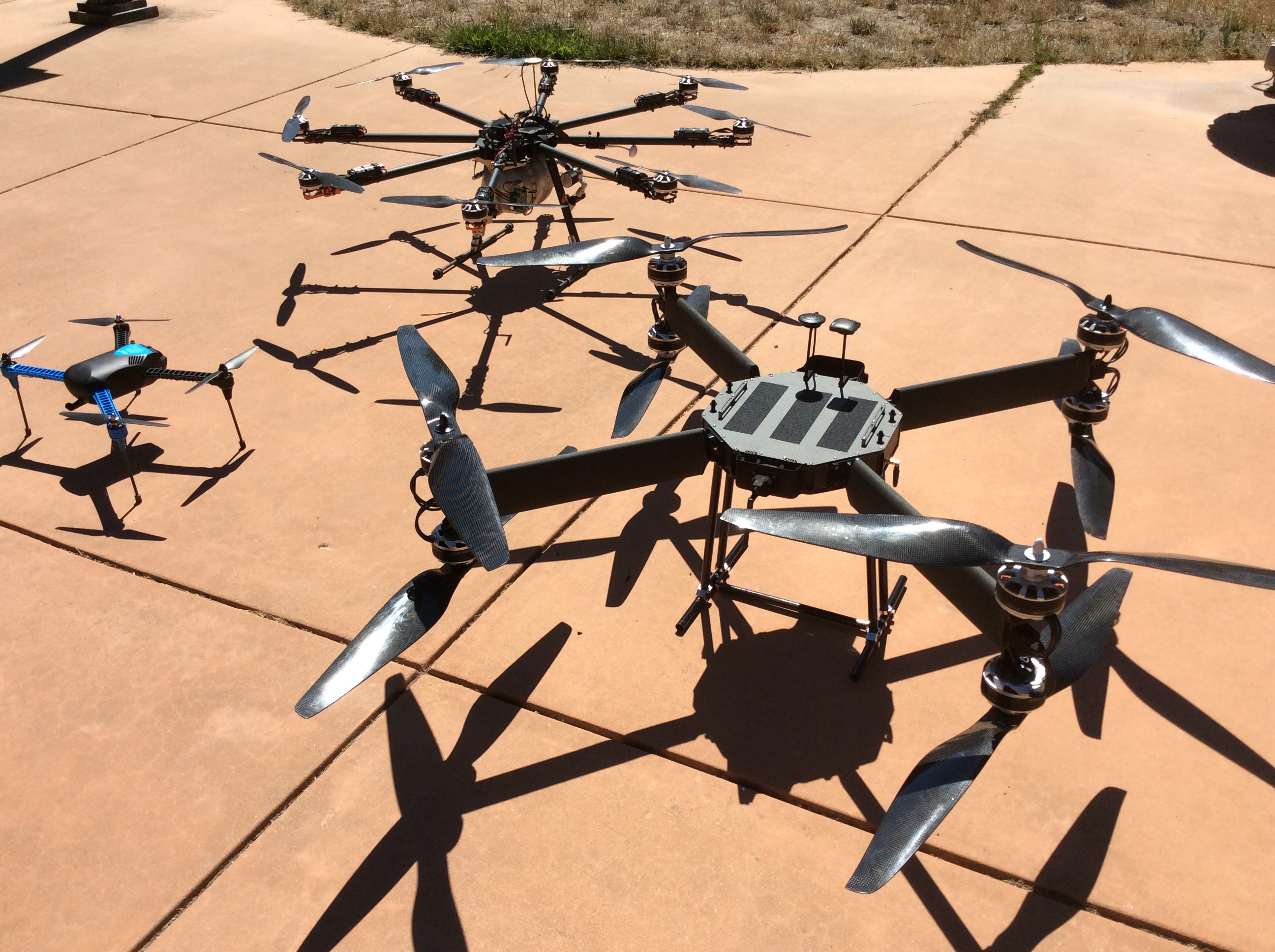 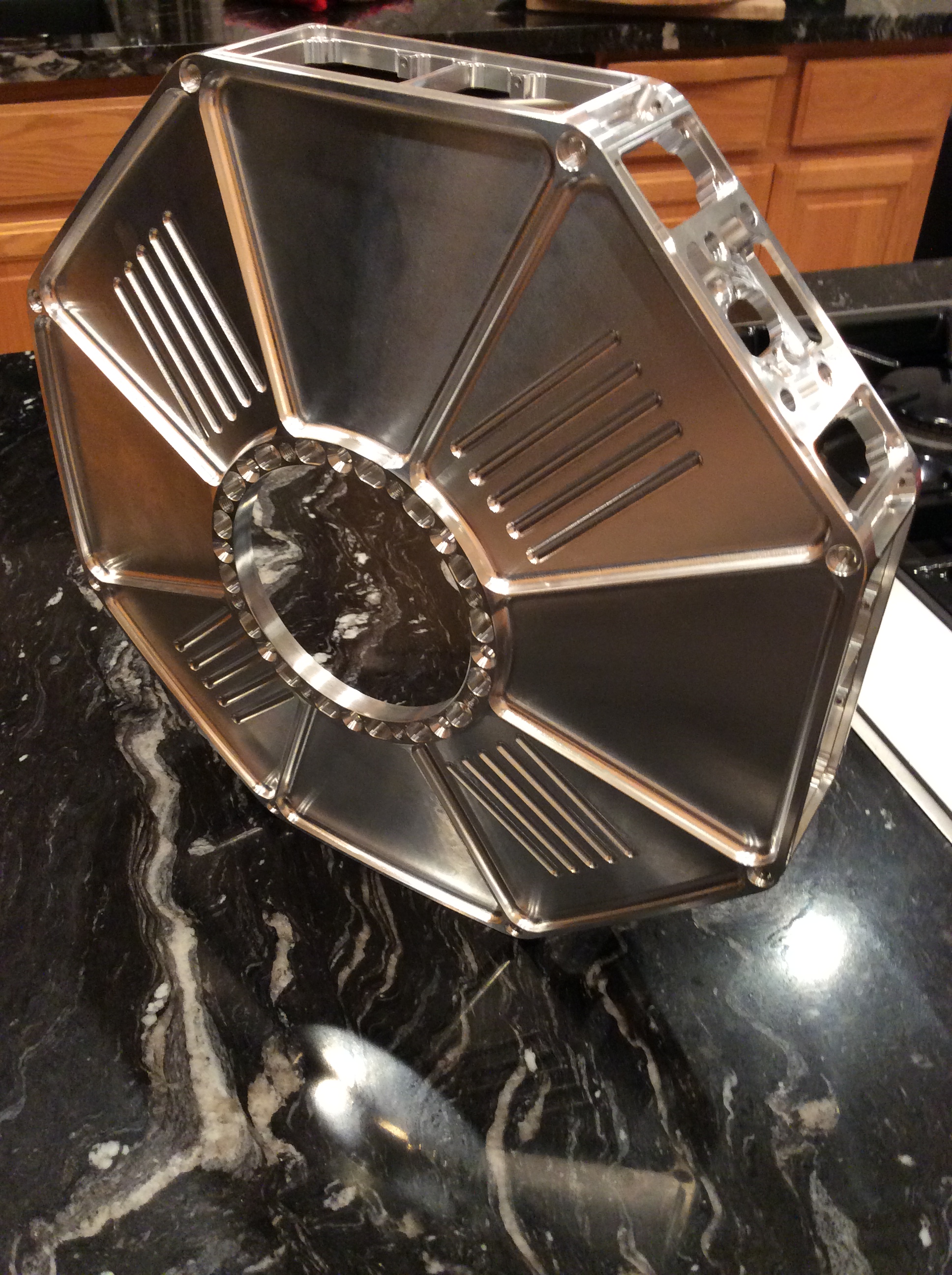 Once we had decided on the layout, we set about designing the center electronics housing. Most frames on the market utilize a 'tube and plate' construction, which is fine for personal use, but is not the most efficient structure.

In our case, because we are giving up some efficiency with the coaxial prop setup,  we needed to optimize the weight of our system as much as possible. To do that we settled on a central body that was machined out of a single piece of 6061-T6. We performed extensive FEA to determine how thin we could make certain critical sections, and the result is a central body that measures 12"x12"x3" that weighs just 1.4lbs (~630g), and can easily carry a 40lb payload.

The aluminum monocoque also has the interesting feature of doubling as a heatsink for the ESCs. All of the avionics are mounted inside of the enclosure, and the ESCs are mounted directly to the aluminum with 3M 8810 thermal tape. This allows the heat generated by the ESCs to be conducted to the main structure itself, and then radiated/convected away. The system works very well, and you can feel that the body of the copter is warm after a long flight.

Another area where we were able to gain some efficiency was by using an airfoil shaped motor boom. While most companies use round arms, from an aerodynamics point of view round arms have approx 10 times the drag of a streamlined shape of the same projected area. By reducing the drag on the boom we get a direct increase in efficiency. Second, because most frames use a clamping system to grab onto the booms, there is a lot of extra weight in the design. 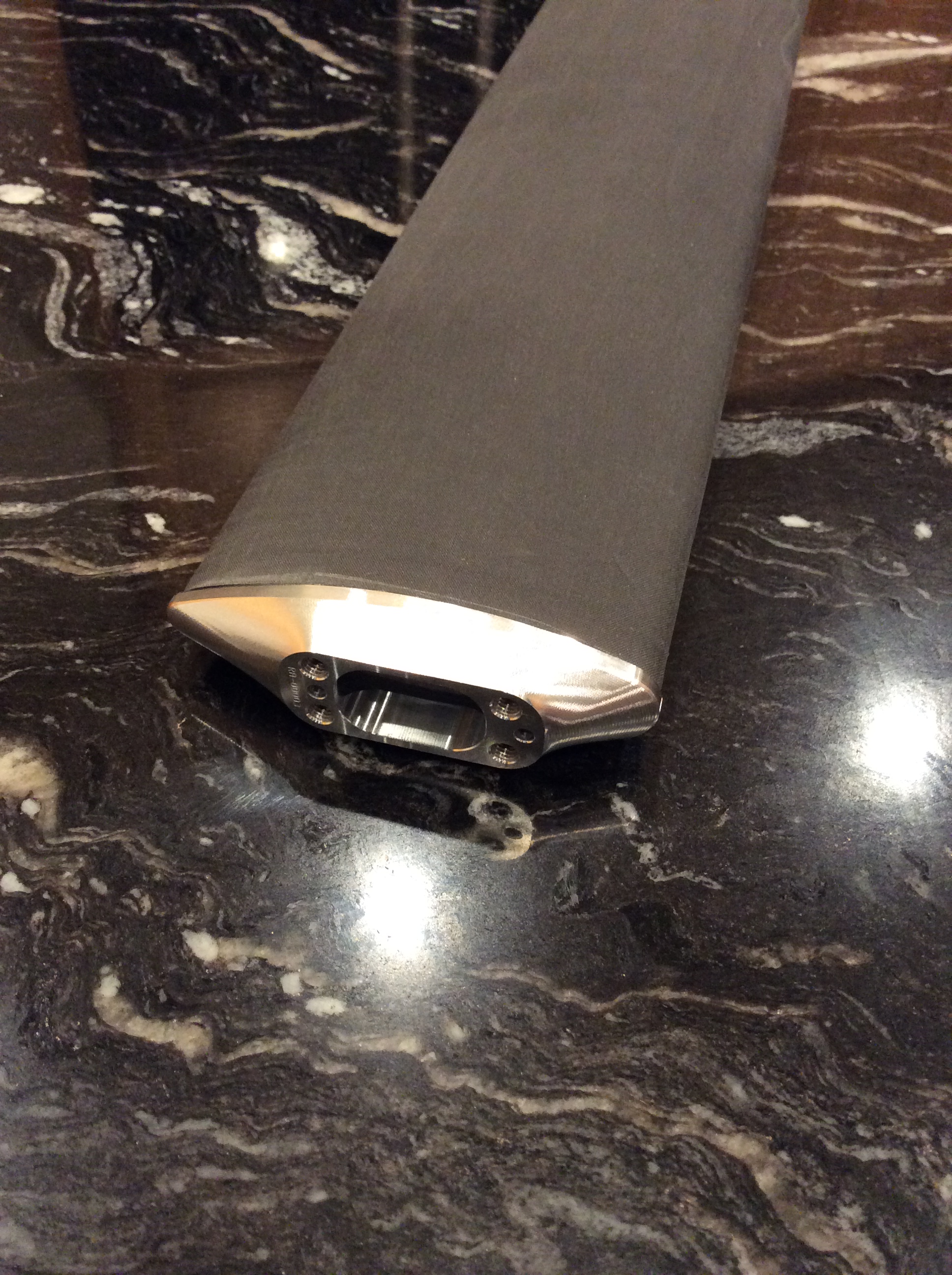 We designed a streamlined airfoil shape, and had unidirectional carbon fiber tubes manufactured. We then designed machined aluminum hardpoints that were then bonded into the carbon tubes with Loctite E120-HP (a very common structural adhesive in aerospace). There are precision holes on the hardpoints, which mate up with precision dowel pins on the central structure. In this way, we can easily remove the arms from the vehicle for storage or transport, and reinstall them back into perfect alignment with just two bolts on each arm. In the unlikely event of a crash, there are aluminum fracture pins that allow the arm to break before damaging the center section (the most expensive part).

Another advantage of the airfoil arms has to do with vibration reduction. A major cause of vibration is caused by the low pressure bubble that forms downstream of the arm collapsing. This phenomenon is called vortex shedding. Depending on the speed of the flow and the shape of the body, it can have quite dramatic effects. The streamlined airfoil arms help to mitigate this effect, which can be especially dramatic with the large props that we are running. I also suspect that the airfoil shape acts like a stator in a jet engine, and helps to remove some of the swirl from the upper prop wash, thus helping increase the efficiency of the lower prop as well (although I have no proof of this).

When all is said and done, we ended up with a copter with the following specs:

In the end, we ended up with a vehicle that meets all of our requirements, and is something that we are proud to put our name on. We are seeing flight times of around 45 min with a Tiny2 Gimbal, Git2 camera, and a Connex HD video link, and flight times around 35 minutes with our sprayer tank system.

If you made it this far, thanks for reading. I want to thank the Arducopter development community for compiling top notch software, and documenting it all. I just wanted to give back to the community and share my project, I hope you liked it. I am happy to answer any questions you may have. 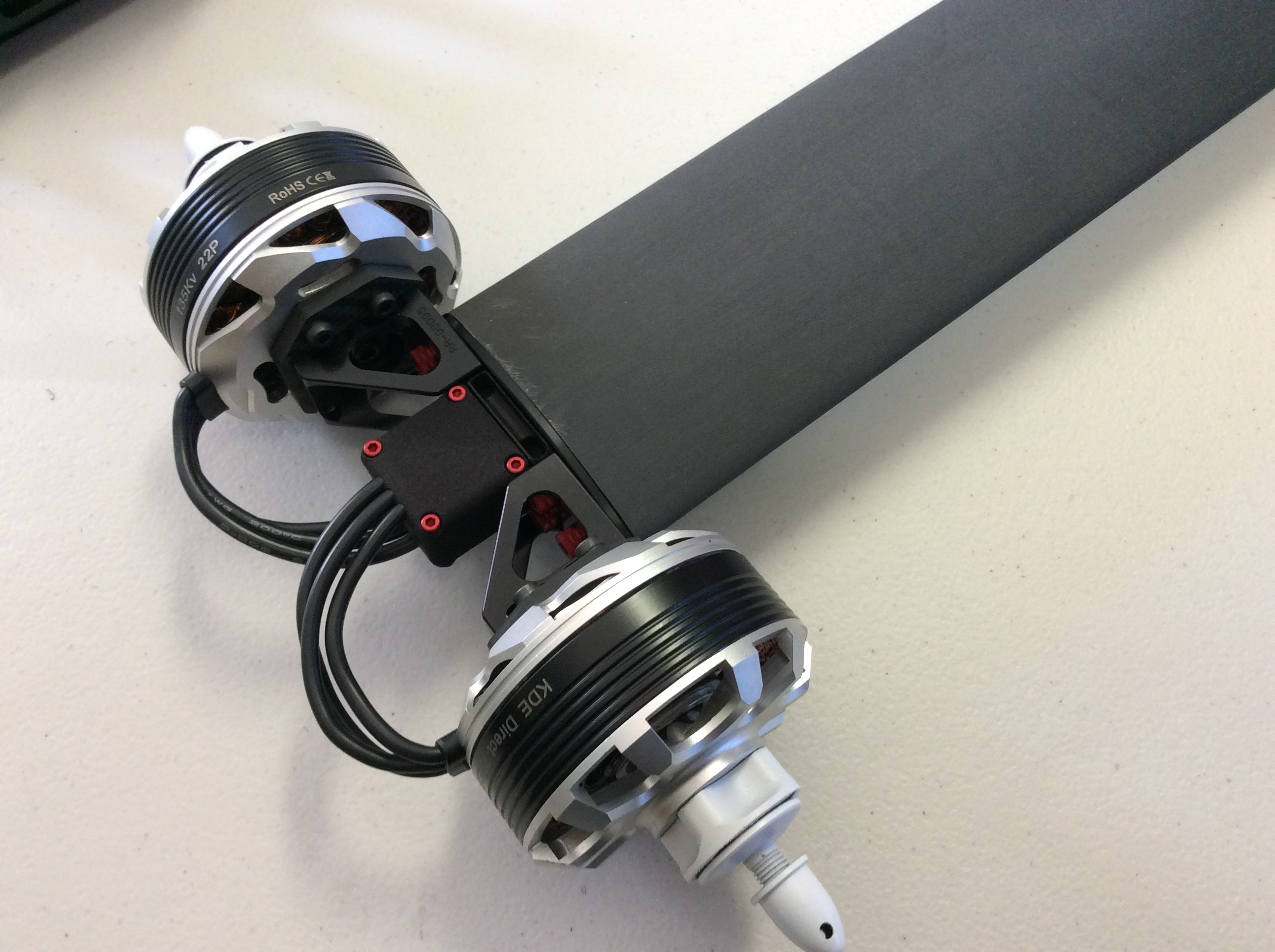