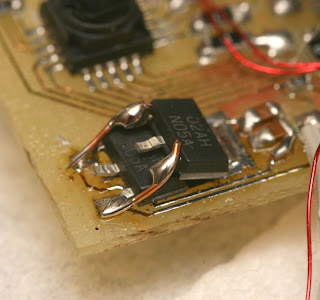 Bodge work continues, in the pursuit of supplying the required current in the smallest possible space.  The LM1117 was the only thing available locally.  It makes 3.25V at 800mA with a 1.3V dropout & no other components.  A single one wasn't enough.

The double stack still got hot enough to burn a human.  Meeting the size & weight requirements makes for some bleeding edge temperatures. 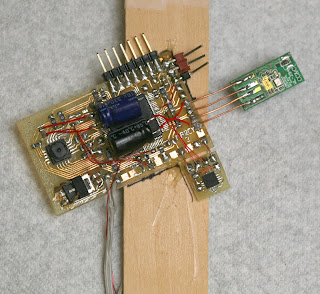 That ended up failing after a few minutes, leading back to the old TO-220. 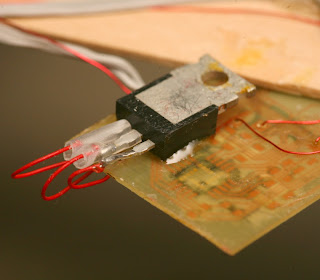 It would be a lot cheaper to calculate the required current, voltage drop, thermal dissipation of the board, & get the exact right part. 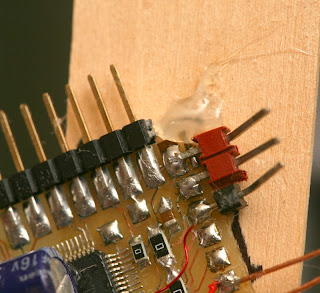 Once you start pouring out heat to get the required power in the required space, the hot glue starts melting.  This has become disastrous in sunlight.  A hotter hot glue is required.

Anyways, after some time chasing after the lack of motor pulsing on Marcy 2, found the Castle Creations 6 is giving different results than the Castle Creations 9.  1 of the mane reasons people design their own ESC's is these inconsistencies.  Response rate, maximum duty cycle, different deglitching algorithms are the mane problems. They all accept 200Hz.  The deglitching may slow down the response rate.

Every ESC over 6A gave instant response, including Castle Creations & Hobbyking.  The leading theory is overloading, causing it to pull back when the throttle change is too big.  The 6A hesitates during throttle increases while the 9A instantly spins up.  Castle Creations are too expensive to buy another 9A & the 10A from Hobbyking takes 1 month to deliver.

Was surprised to find 3drobotics does not sell an open source ESC as rumored.  They sell a 20A m2mpower ESC.

The mikrokopter ESC is the only complete source code & very specific about not being licensed for commercial use.

There is an SIlabs reference design.  It's quite simple.

The fact is you can't undercut hobbyking, which makes any home made ESC fruitless.

The lack of an ESC & no desire to break down Marcy 1 for her ESC led to implementing things which make Marcy 2 a product more than a science project, manely a full router stack.  ARP, ICMP, DHCP, & DNS were the big ones.  The mane dictator over all this is the high USB error rate, causing many packets to be lost. 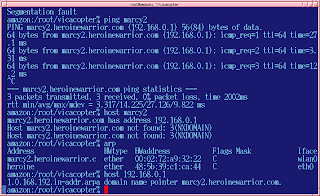 DNS was a real painful implementation of a luxury.  It destroys the realtime performance.  It's too slow to ever be used, but a host name looks neater in a ping command than an address.

Marcy 2 takes your computer off the internet & puts you on her own isolated network in domain heroinewarrior.com.

The access point now supports 8 stations, with flight control possible from any IP address.  In the battle of the router, DNS was voted off the stack.  It worked, but was the only protocol which had response packet length determined by the user.  Some packet lengths caused yet another USB crash.  So DNS now sends a fixed size response.  If the domain name is too big, it's truncated.

Even without that crash, the URB_ERRORs make all the protocols unbearably slow.  ASSOC, DHCP, & ARP are pretty bad but only happen once.  The only way to make the experience fast enough is to limit communication to the flight protocol.  There's no way to have a web page for configuration.

The URB_ERRORs on the STM32F4 drop when the pipeline is kept busy.  In full operation, streaming 2 megabit video, there are almost no errors & the IP stack always works.  Another method is to poll the interrupt endpoint graciously provided by the RTL8192.  This always returns immediately.  The interrupts are absolutely useless, but they keep the pipeline busy enough to reduce the errors.

Sort of disappointing to go through all the trouble of supporting a USB dongle only to have it be incapable of basic IP protocols.  Since the USB core on the STM32F4 is a stock core from Synopsis, there's always hope it really works, but so far it still seems intended for a mass storage device, where the reads are always guaranteed to happen right after a write.

The money for a smartphone is still too far off.  All roads are now leading to iOS & then porting to Android when iOS usage falls off.  It's unavoidable, since iOS is the only thing which is guaranteed to work.  Android has zillions of incompatible pieces of hardware.

The real problem is how iOS is only supported on 2 gadgets: 1 phone & 1 tablet, each updated only once a year.