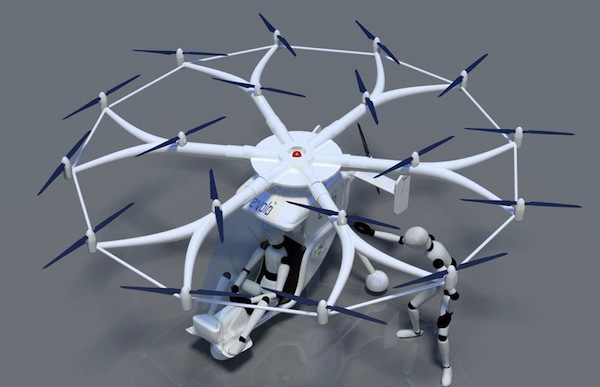 Scientific American reports on plans for "volocopter", a human-carrying multicopter from Germany:

Inventor and physicist Thomas Senkel created an Internet sensation with the October 2011 video of his maiden—and only—test flight of a spidery proof-of-concept 16-rotor helicopter dubbed Multicopter 1. Now the maker of the experimental personal aviation craft, the European start-up e-volo, is back with a revised "volocopter" designthat adds two more rotors, a serial hybrid drive and long-term plans for going to 100 percent battery power. The new design calls for 1.8-meter, 0.5-kilogram carbon-fiber blades, each paired with a motor. They are arrayed around a hub in two concentric circles over a boxy one- or two-person cockpit.

After awarding the volocopter concept a Lindbergh Prize for Innovation in April, Yolanka Wulff, executive director of The Charles A. and Anne Morrow Lindbergh Foundation, admitted the idea of the multi-blade chopper at first seems "nutty." Looking beyond the novel appearance, however, she says, e-volo's concept excels in safety, energy efficiency and simplicity, which were the bases of the prize.

All three attributes arrive thanks largely to evolo’s removal of classic helicopter elements. First, the energy-robbing high-mass main rotor, transmission, tail boom and tail rotor are gone. The enormous blades over a normal chopper's cabin create lift, but their mass creates a high degree of stress and wear on the craft. And the small tail rotor, perched vertically out on a boom behind the cabin, keeps the helicopter's body from spinning in the opposite direction as the main blades, but it also eats up about 30 percent of a helicopter's power.

The volocopter's multiple rotor blades individually would not create the torque that a single large rotor produces, and they offer redundancy for safety. Hypothetically, the volocopter could fly with a few as 12 functioning rotors, as long as those rotors were not all clustered together on one side, says Senkel, the aircraft's co-inventor and e-volo's lead construction engineer.

Without the iconic two-prop configuration, the craft would be lighter, making it more fuel efficient and reducing the physical complexity of delivering power to the top and rear blades from a single engine. Nor would the volocopter need an energy-hungry transmission. In fact, "there will be no mechanical connection between the gas engine and the blades," Senkel says. That means fewer points of energy loss and more redundancy for safety.

E-volo's design eliminates the dependence on a single source of power to the blades. As a serial-hybrid vehicle, the volocopter would have a gas-fueled engine, in this case an engine capable of generating 50- to 75 kilowatts, typical of ultralight aircraft. Rather than mechanically drive the rotors, the engine would generate power for electric motors as well as charge onboard lithium batteries. Should it fail, the batteries are expected to provide enough backup power so the craft could make a controlled landing.

More details and render videos at the E-Volo site.