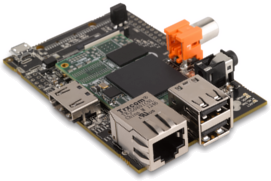 The Raspberry Pi has been around for a while now, and while many boards that hope to take the Pi’s place at the top of the single board ARM Linux food chain, not one has yet succeeded. Finally, there may be a true contender to the throne. It’s called the HummingBoard, and packs a surprising amount of power and connectivity into the same size and shape as the venerable Raspberry Pi.