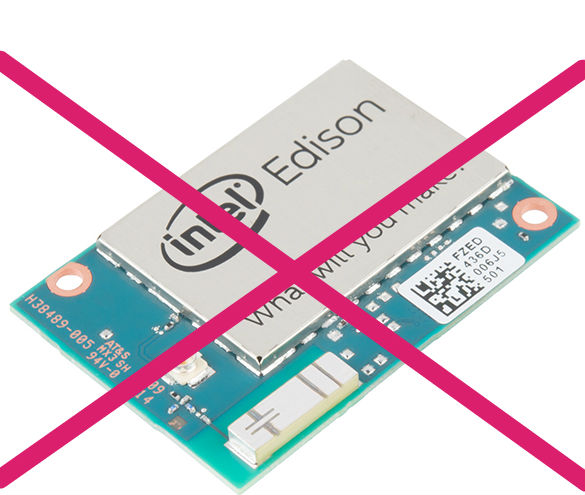 It was well known that Edison was going to be discontinued this year, but Joule, which was just released, is a surprise. This is bad news for any autopilot board that uses Edison, such as Pixhawk 2.1, which will now have to move to another companion computer. (I'd suggest Raspberry Pi). From Hackaday:

Sometimes the end of a product’s production run is surrounded by publicity, a mix of a party atmosphere celebrating its impact either good or bad, and perhaps a tinge of regret at its passing. Think of the last rear-engined Volkswagens rolling off their South American production lines for an example.

Then again, there are the products that die with a whimper, their passing marked only by a barely visible press release in an obscure corner of the Internet. Such as this week’s discontinuances from Intel, in a series of PDFs lodged on a document management server announcing the end of their Galileo (PDF), Joule (PDF), and Edison(PDF) lines. The documents in turn set out a timetable for each of the boards, for now they are still available but the last will have shipped by the end of 2017.

It’s important to remember that this does not mark the end of the semiconductor giant’s forray into the world of IoT development boards, there is no announcement of the demise of their Curie chip, as found in the Arduino 101. But it does mark an ignominious end to their efforts over the past few years in bringing the full power of their x86 platforms to this particular market, the Curie is an extremely limited device in comparison to those being discontinued.

Will the departure of these products affect our community, other than those who have already invested in them? It’s true to say that they haven’t made the impression Intel might have hoped, over the years only a sprinkling of projects featuring them have come our way compared to the flood featuring an Arduino or a Raspberry Pi. They do seem to have found a niche though where there is a necessity for raw computing power rather than a simple microcontroller, so perhaps some of the legion of similarly powerful ARM boards will plug that gap.

So where did Intel get it wrong, how did what were on the face of it such promising products fizzle out in such a disappointing manner? Was the software support not up to scratch, were they too difficult to code for, or were they simply not competitively priced in a world of dirt-cheap boards from China?