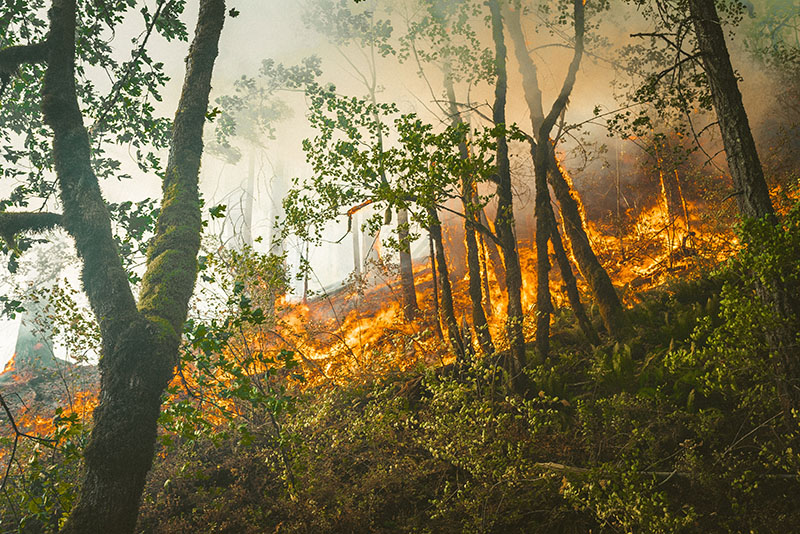 The effectiveness of drones is rapidly catching on, as agencies around the world begin to adopt this technology. In the US, more than 900 state and local agencies related to the emergency services are using drones one way or another; out of them, approximately, 186 is believed to be related to fire and emergency medical services.

Can Drones (UAVs) Put Out a Fire?

This is a common question that people often ask. A short answer is No, drones are more useful in acquiring situational awareness about the fire and its surroundings. Firefighters can use this information to control the fire and ultimately put it off. However, there are a few companies that are equipping drones with water hoses or fire extinguishing materials.

How Are Drones Used During Firefighting?

Situational awareness: In a typical scenario where a fire has broken out in a building, firefighters arrive at the spot and begin their operation with limited information about the extent of the fire and damage it has caused to the structure.

Instead, with a fleet of drones, firefighters can begin with an aerial assessment of the scene and know the extent of the fire before starting their rescue operation.

Reach difficult places: Drones are efficient in going to tight spaces since they are nimble and agile, and deploying them first avoidings putting humans in unsafe situations.

Search and rescue:  Firefighters are actively involved in search and rescue missions. A thermal camera drone can do the job of 100 people by scanning a large area and identifying people in distress. During a natural calamity like an earthquake, thermal camera drones can fly over fallen structures and identify trapped individuals, and even identify dangerous leakages.

What Kind of Drones and Payloads are Commonly Used During Firefighting?

Drones come in all shapes and sizes, but not all of them are suitable for firefighting operations. The more suitable ones are off-the-shelf drones from the likes of DJI and custom drones based on open source stacks mainly PX4 and Ardupilot. Here are some of the drones that are considered fit for such kind of tasks:

Drones are not usable without the appropriate payloads. For firefighting purposes, these are some common payloads that are used:

The conventional way of using drones, during firefighting, is a pilot controlling a drone using the remote controller (RC). Here, the pilot becomes the relay point of all the information collected by the drone. This method of using drones may be simple, but is not very effective, since multiple pilots are required to control multiple drones. On top of the human resource requirement, there are several other disadvantages, as follows:

How FlytNow Helps in Overcoming the Traditional Challenges

FlytNow is a fleet management system that helps public safety officials to overcome challenges in using drones for firefighting.

FlytNow is a cloud-based application that provides a unified dashboard to control a fleet of drones. It has two versions (Business and Enterprise) that cater to two different use cases.

How Drones are Connected to the FlytNow Cloud Application

FlytNow is a hardware-agnostic cloud platform meaning it supports different kinds of drones. Users using DJI drones can use the FlytOS mobile app to connect the drones to the cloud application.

In the case of custom drones, a single board computer loaded with the FlytOS operating system can be attached to the flight controller of the drone, to facilitate communication with the FlytNow application over a 4G/LTE/5G network.

FlytNow Business is a standard offering that provides out of the box features in the form of SaaS (Software as a Service). This version is useful in establishing a quick command center, locally, for a particular response to manage the drones in operation.

Some of the unique features and benefits that it provides are as follows:

The Enterprise version adds customization and addons to the Business edition. This version is ideal for setting up a drone-based emergency response system with the following capabilities:

With respect to fire fighting, the Enterprise version offers advantages such as:

In this blog, we discussed the importance of drones for firefighting and how they can be used to save time, resources, and lives. We also touched upon the kind of drones and payloads used for fire fighting operations. Finally, we ended by showcasing the benefits that FlytNow provides by allowing the usage of drones at scale with data availability for proper coordination.

If you (plan to) use drones for public safety, then FlytNow is the right software platform to allow you to leverage cloud technology for better management and transparency of your drone operations. You can get started with our 28 days of a free trial. You can also contact us at https://flytnow.com/contact/