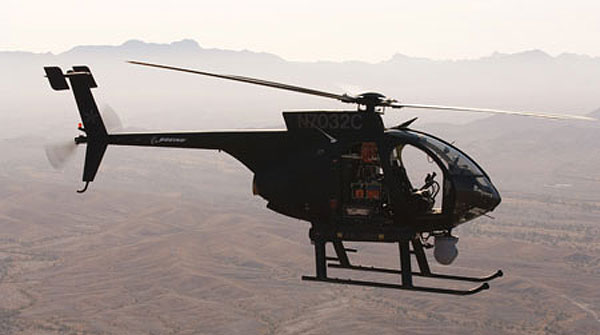 Reports Wired's DangerRoom blog: "While on-the-fly autonomous navigation is a first for a full-sized helicopter, the technology developed by Sanjiv Singh and his team from Carnegie Mellon is not so different from what they used to outfit a Chevy Tahoe to win Darpa’s 2007 Urban Challenge. “It’s not as if we started from scratch,” says Singh. “A lot of the technology was there already.”

To make the helicopter self-flying, the team installed a scanning LIDAR that uses lasers to collect range information from its surroundings. The laser data is processed by a computer that relays commands to the helicopter controllers.

The data also creates a 3-D map that enables the helicopter to “see” the ground or obstacles in the air — and then adjust its trajectory accordingly. The algorithms helped the helicopter miss a tall tower during one of the tests. In another trial, the team deceptively instructed the helicopter to land on top of a car, but the chopper was not fooled, resolving instead to land on flat ground nearby."

It's based on earlier RMax automomous obstacle avoidance research: