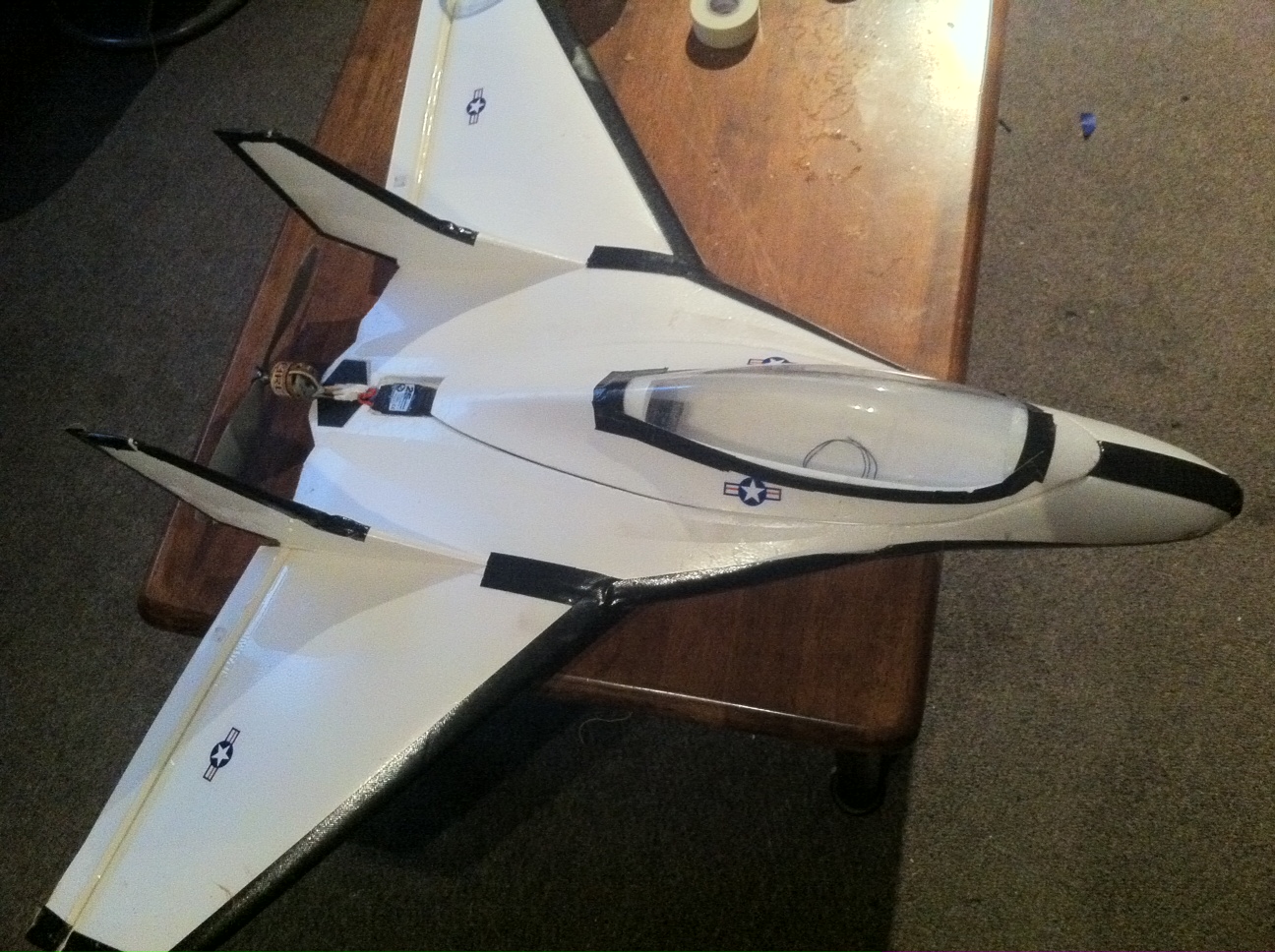 The stock skyfun platform is pretty good, but as a lot of people have pointed out, the power system is barely enough for our needs by the time you add a few goodies on.
There is lots of info on the web about motor upgrades for the Skyfun but most of the motor upgrades published on the net are all about speed. I wanted my Skyfun to have enough power to lift all the extra weight, but then to be able to settle down to a slow and efficient cruise speed to maximise the amount of time in the air. That means means going for a slow turning large prop. Finding info on this sort of upgrade is next to impossible.

Lets start with the airframe:

I took a stock RTF Skyfun, removed all those hideous decals and then set about applying Gaffa tape to all of the vulnerable surfaces. This has already proven its worth during my initial testing as I had a high speed collision with a power poll with practically no damage. Gaffa is quite heavy, but it is incredibly strong and prevents the foam from tearing. Applying it to any part of the airframe where torn foam is possible reduces damage considerably. The tape can then be removed and easily replaced after an 'incident'..

After multiple failed canopy gluing attemps, I have also applied a thin strip of Gaffa tape around the edge of the canopy to keep the plastic on, which has proven effective. The canopy now feels very sturdy.

I'm using the stock servos, they seem fine for the task as it is not going to be a high speed machine.
RC equipment was upgraded to a 9ch JR PCM system. 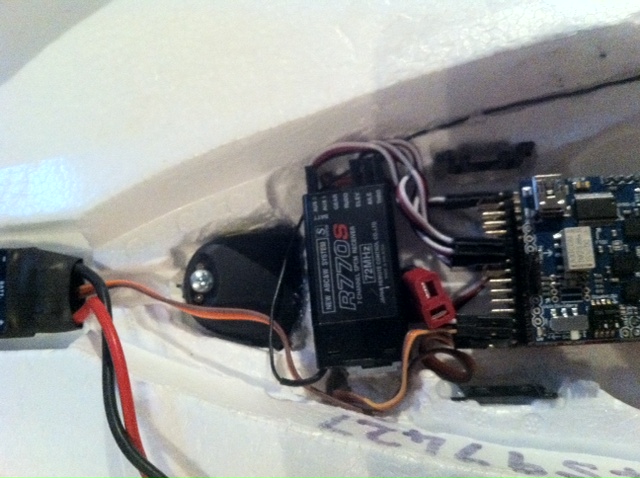 Mounted just behind the receiver is a keyring video camera, I set it into a hole in the fuse at a 45 degree angle. This gives a great view and has the advantage of being closer to the CG for maximum stability and does not result in any part of the aircraft obscuring the picture.
I chose to mount the camera upside down so that the USB cable can be inserted into the camera (from the bottom) without needing to dismount the camera, it also allows easy access to the camera controls. The downside is that the image is upside down, but this can easily be flipped on a PC later.

I spent a lot of time on motor research and determined I needed the biggest prop I could spin at the slowest speed possible in order to gain maximum thrust and low speed efficiency. I settled on a Rimfire 400. Specs are below.. I decided to run with a 10x4.5 slow fly prop, however a prop this big is wider than the distance between the two vertical stabilizers. This requires reversing the motor, pushing the shaft through to the opposite end and drilling some holes in the motor mount in order to attach the motor to the back of the mount. Doing so clears the back of the stabilisers by 8mm.

Next came the battery, I wanted to be able to cruise for at least 30 minutes and my rough calculations indicated this would require at least a 3000mAh battery. I settled on a DN 3300 30C pack. In my first few flights with this I have achieved 35 minutes and 37 minutes respectively without much consideration for efficiency. I think this can be extended further by reducing airspeed.

A battery pack this large would normally have to be seated well towards the back of the cockpit, this would have meant mounting the APM in front of the battery, something I really wasn't too keen to do. A battery this big in a crash would completely destroy anything in front of it (APM). My camera, receiver and APM were already consuming most of the back of the cockpit and putting a battery this large at the front of the plane shifted the CG too far forward. 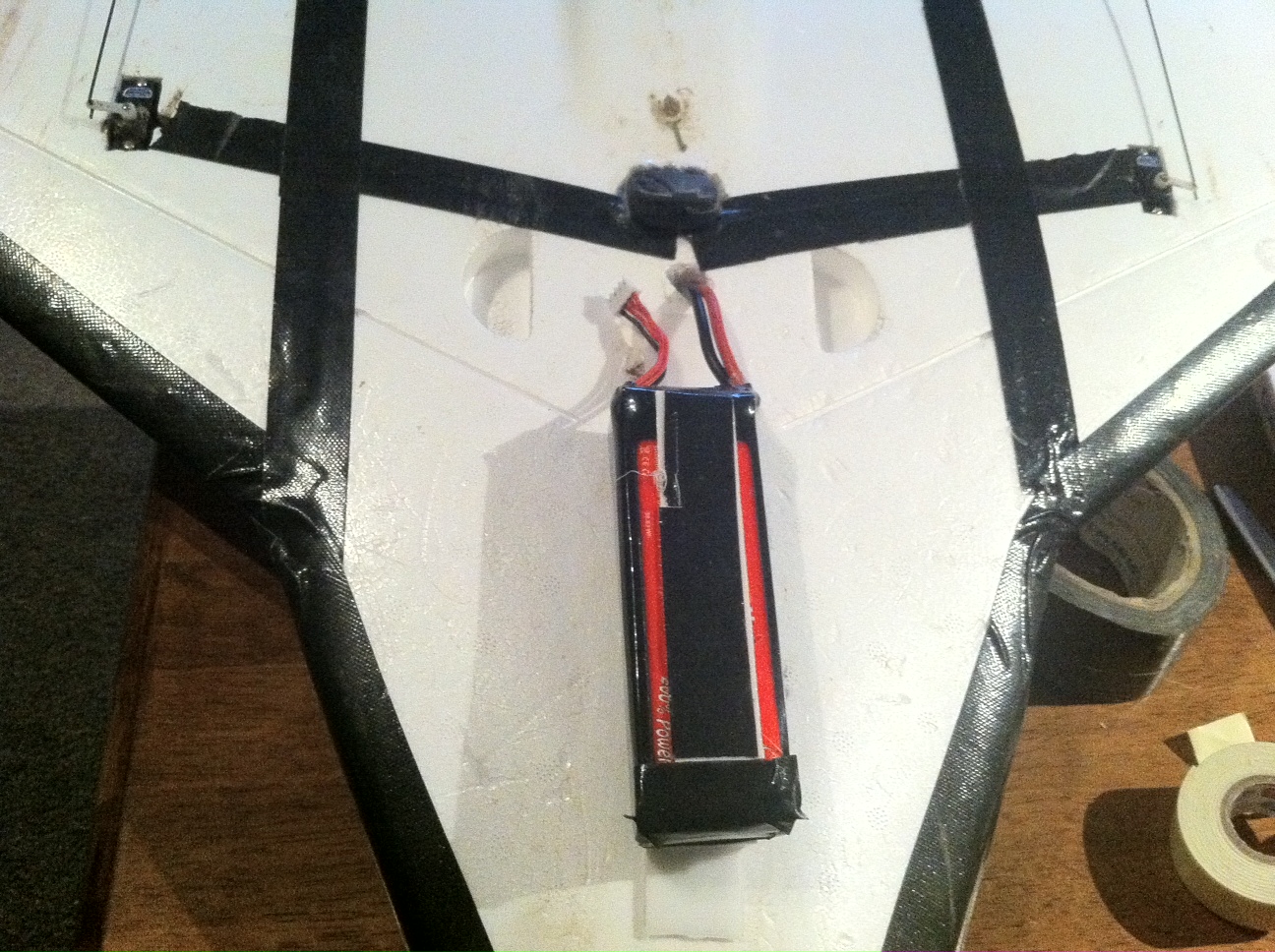 I opted for belly mounting the battery, bomb style. This proved to be very useful as it allowed the CG to be easily shifted by quite large amounts without running into any obstacles. It also keeps the CG very low which has improved stability noticeably. It now flies more like a high wing trainer.

At the moment it is being held by industrial Velcro, however my next upgrade is to install a Velcro strap through the fuse for additional safety.

The only downside is that it exposes the battery, particularly on hard landings. I couldn't see an easy way around this that would maintain CG flexibility and didn't add a lot more weight, so I opted for sponge foam with gaffa tape over it along the bottom of the battery. I will review this after a few more flights to see how it goes but so far if I'm careful with landings its fine. If it looks like the battery is wearing too hard, then I will add some more rigid protection. Long term I will probably build some form of capsule underneath for at least the front of the battery to slot into. Most of my landings are in long grass so isn't an issue.

Total weight including the battery is now 900 grams which is under my target of 1kg. I have yet to measure the thrust from the motor, but at full throttle it achieves a slow vertical climb so it must be slightly higher than 900 grams.

The next step is establishing the slowest speed I can possibly fly so I can figure out how long I can stay in the air for. I would be very happy if I could get it closer to a 45 minute flight.