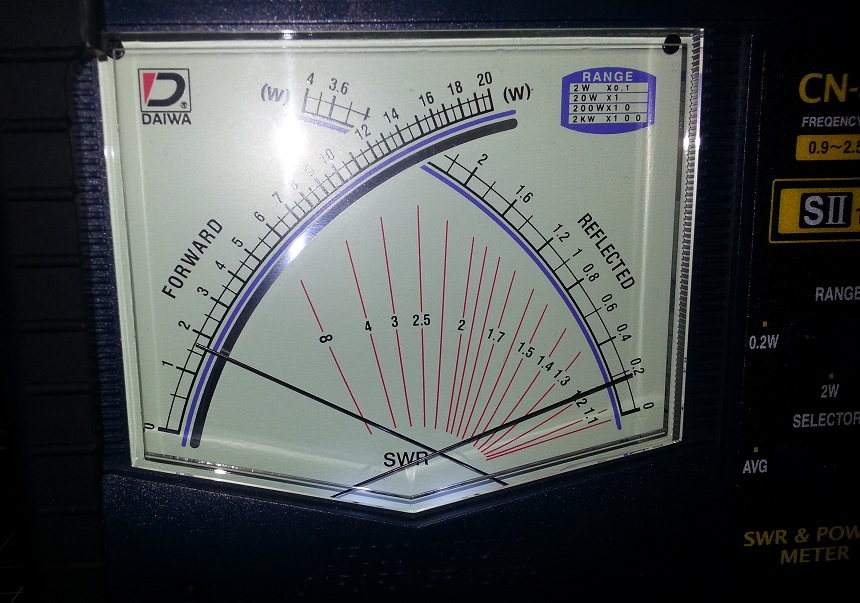 SWR is one of those things that most people don't need to worry about.  However, when you start building your own antennas or need to get every mw of power out of your existing antennas, you might need to check/tune your SWR.

The Wikipedia article does a good job explaining what SWR is, but in a nutshell, it's the efficiency of your antennas coupled with your transmitter's frequency. An antenna that is a poor match for a specific frequency will be less efficient at transmitting that frequency and reflect some of that energy back to its source.  A SWR meter measures two things, forward, and reflected power; these two things together tell you what your SWR is.  SWR is measured on a exponential scale with 1 being the best, and anything under 2.5 being consider good.  Most store bought FPV antennas will be around 1.2.  I use they highly recommended DAIWA  CN-801 SII, which can measure 0.9 to 2.5 GHz.

To get started I'm going to connect my ~300 mw 1258 MHz video TX and an Ibcrazy 4 lobe antenna (which cannot be tuned).  Because of the scale on my meter, I put a 10 db attenuation on which puts the needles in a better place to read, however this hides my true forward power.  I'll remove it later to see how much power my TX is actually putting out. When I turn on the video TX (no video signal required), I can read my SWR for this antenna by looking at the point the two needles cross.  This antenna is great with a SWR of ~1.2. As I said before, this type of antennas can't be tuned (unlike say a dipole you could change the length on), however we can place an object in the antenna to see a similar change. Now when we measure the SWR is worse.  Looks to be ~2.15.  Notice how the reflected power has gone up.  That means with some bulky object causing a short, it's reflecting more power back and not transmitting the full power of the TX. Finally, we remove the 10 db attenuation to check the power output of my video TX. And it's actually a little bit better than 300 mw it was sold as.  Not bad.


So even if you're not going to be tuning your own antennas anytime soon, it's important to remember that you should always try to improve your antennas before you start throwing power at a problem.  That 1W video TX might only be outputting 400 mw.  Also, if you're using something that is frequency hopping, generally you would tune your antennas for the middle of the band.  A good SWR meter also tells you how much power you're actually transmitting which is always helpful.