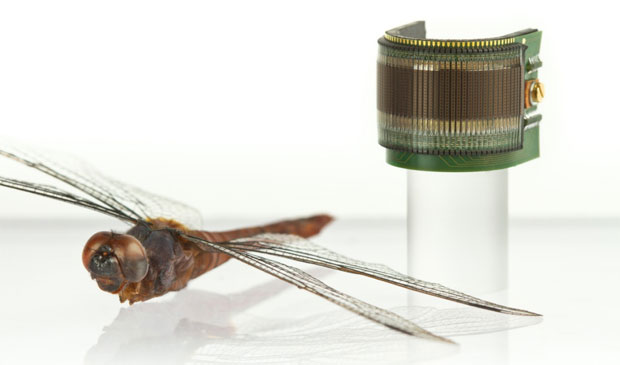 Generally, we like to make camera systems that work like our eyeballs do. And that's fine. But in a lot of ways, human eyeballs are terrible. The most successful class of animals ever, the arthropods, have gotten along just fine with compound eyes for a very long time, and the most sophisticated eyes of any animal are of the compound variety (belonging to our friend the mantis shrimp).

So obviously, compound eyes have something going for them, which is why researchers in general (and roboticists specifically) are so keen on developing their own versions. The eye to come out of EPFL this week is unique because it offers a huge insect-like field of view, very fast performance under all sorts of lighting conditions, and most notably, it's mechanically flexible: at just 1 mm thin, you can bend it into different shapes.

We got a look at this thing a couple weeks ago while we were visiting Dario Floreano's lab at EPFL, and it's totally cool:

It's amazing how the use of this flexible substrate enables sensors that are not just bio-inspired, but in fact end up nearly identical to the types of compound eyes that you find on everything from flies to trilobites. Here's a figure from the paper showing a comparison: Image C shows the eye from an extinct species of trilobite, while Image D shows the eye from a fruit fly. Both the real and artificial eyes offer a horizontal field of view of 180 degrees, and they consist of a similar number of pixels. However, the artificial eye is significantly faster, operating at up to 300 hertz, while a fruit fly only updates at 100 hertz. Take that, nature!

It's important to note that these aren't the sort of cameras that you'd want to use to take pictures. What they're best at is sensing movement, or to be more specific, sensing changes in the intensity of light generated by motion. It doesn't sound like much (and it doesn't look like much, either), but it's how bugs navigate and avoid obstacles, and as anyone who's ever tried to swat a fly can attest to, it works rather well. It also works indoors, outdoors, in bright sun, and in shade (or even moonlight), and has no trouble adapting to abrupt transitions between any of these states, which is something that conventional cameras are lousy at.

Here's a video of the system in action, which gives a good idea of what an optic flow sensor "sees" and why it works so well for insects:

Clearly, there are many advantages that these kinds of sensors can bring to robotics, especially in the context of lightweight aerial platforms. And there's no reason to stop at just one of 'em, either: put a couple CurvACE sensors together and all of a sudden you have a 360 degree panoramic sensor system the size of a couple of quarters: Going forward, we expect to see this tech integrated into robots, and there's also the potential for it to show up in lots of other applications. If it can be made inexpensively enough, we could end up with something like "imaging tape" that could be integrated into smart clothing, to provide a self-contained way of detecting distances to objects. Why? Because why not, that's why. But seriously, flexible sensors like these have the potential to enable all sorts of new applications that have been impossible until now, and we're excited to see what happens.

Special thanks to Dario Floreano and Ramon Pericet-Camara for showing us these eyes at EPFL.