We have a new Android based fully rugged ground control station format for some serious UAV/USV work. We’ve been calling it simply the RHH, and it was developed with extensive modularity in mind from scratch. As the supporting and enthusiastic community of DIYdrones looks more and more like the primary meeting place of professional unmanned platform developers, rather than just DIY-ers and hobbyists, I think there’s some interest in this level of GCS integration here, as well.

Because operating only in fair weather is a luxury not all users can afford, we had to come up with a fairly light hand-held controller that does the job under any circumstances. While we still mostly associate UAV flights with clear skies, there are always occasions where we just can't get away with a hobby grade RC and a tablet or a laptop. We also thought about surface systems, which are even more affected by the weather.

Protecting the GCS from the elements is just one of the points here, because when it comes to rain or extreme cold you would like to operate from some kind of shelter, at least a car or a van. That’s where the extreme modularity of this design comes in really handy. The entire RF unit of the RHH is removable from the bottom of the controller, and it can be mounted on your car roof, tripod, mast or even on the pan axis of an antenna tracker. The field cable between the two modules is just a thin and flat twisted pair, which can be shut into the car door without messing with the seal. The cable can be of any practical length, because there is some serious voltage compensation and signal conditioning going on at both ends. Although it’s not exactly PoE (Power over Ethernet) in all versions, but we use a similar system for legacy hybrid AV/RC/modem controls, whereas there’s a fairly straightforward powered LAN connection for transparent IP RF links like Microhard or modified WLAN. If you want to get rid of the single field cable, a wireless ground relay is also possible with most RF link combinations between the station and the RF box, but it may introduce unwanted latency in some signals. Safety is another concern when adding another RF hop to such systems, because typically low power ground relay signals are easy to block or screen accidentally. Of course, then you also have to power the RF box independently, preferably with built-in batteries. 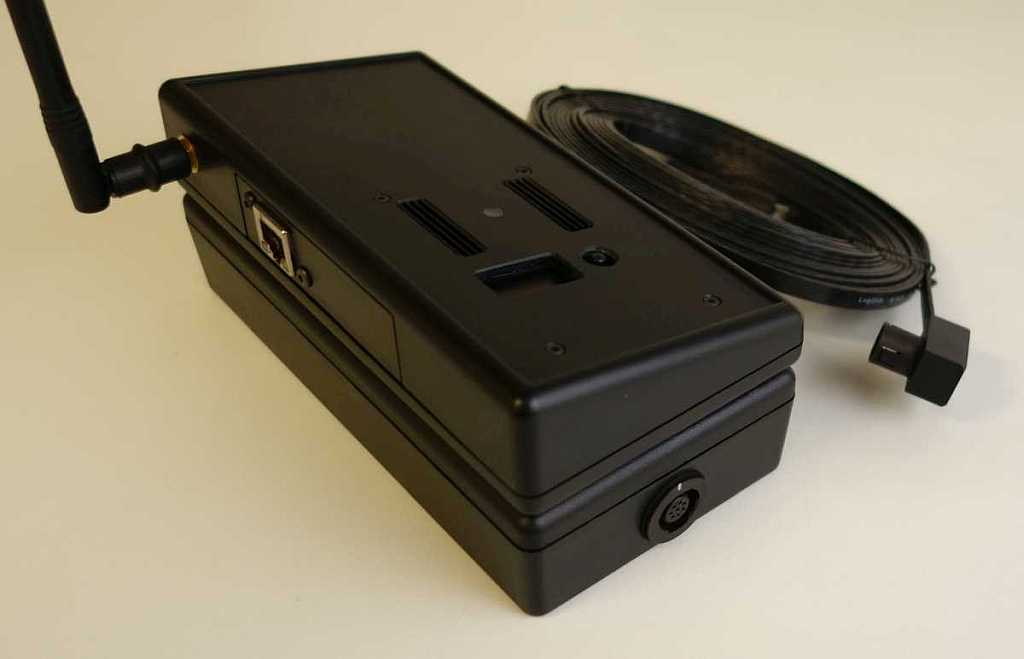 Using such a rugged docking RF box design has another advantage when operating many different systems with the same station. Because the pinout for the bottom docking connectors is universal for all station and RF box variants in the 10” RHH line, changing bands, RF modules or even upgrading to high-end transparent IP links is just a snap without having to modify the station itself.