In a patent application from last month, uncovered by the BBC yesterday, Amazon outlined a plan for its proposed delivery drones to get packages to you in half an hour, regardless of where you are.

Up to now, Amazon’s drone plans have suggested they would arrive at your doorstep, dropping off packages like a smaller, louder mailman. But Amazon’s application suggests the company is exploring ways to have its drones come directly to wherever your smartphone is.

The application outlines a process whereby an Amazon customer orders something small—a book, perhaps, or maybe a box of Tide—via the Amazon app and selects the “Bring It To Me” delivery option. The nearest drone delivery system hopper would then saddle the drone with the order and deploy it to the location of the customer’s smartphone.

Once within range, the drone then will perform a controlled landing by somehow using the camera function of the customer’s smartphone to navigate a path from the sky to the ground. Exactly how is a little unclear, though the patent notes that the customer could theoretically land the drone herself. Presumably, though, the customer would have to make sure their phone was somewhere safe, in case the drone had to make a hard landing.

Not that landing is essential. The patent application suggests the drone wouldn’t have to actually touch the ground to drop off your delivery—it could just hover near you, release its package, and be on its merry way. The filing also says that Amazon wants to its drones to communicate with each other while in the air, “to share weather information, location information, routing information, landing areas.”

There are still a few hurdles that Amazon will have to clear before drones whiz through the skies bearing urgent deliveries of paperbacks and gluten-free pasta. There’s no guarantee that the US authorities will approve the patent, nor that Amazon will end up implement the technology if it does. The company is also still hoping for approval from the US’s aviation administration and other countries’ regulators for use of a drone program that wouldn’t require Amazon to keep drones within the line of sight of human operators. 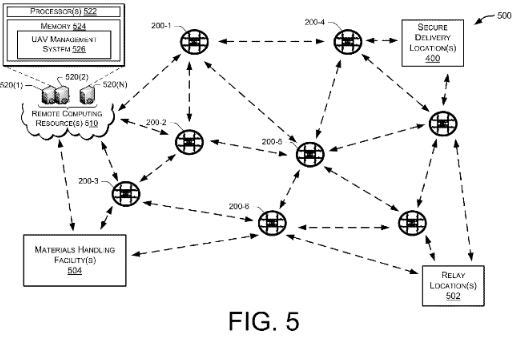 Nate Swanner of SlashGear picked up on the patent discussion about how the drone may not only focus on delivering to a desired location but also communicate with one another, "sharing info on weather or landing zones. Those delivery drones may also share info on flight paths; for instance, they'd know a particular highway was gusty from big trucks based on their flight data, and fly a bit higher to avoid trouble or at an angle to ease its entry/exit from the airspace above the road next time, and share that info with other drones."