I just wanted to detail my small triumph this past weekend with this - my first blog. I have been building up to a 100 km flight for the past few weeks (months?) It's just something I've been wanting to do - and do it with budget friendly parts.  Data analysis and design optimization are things I enjoy almost as much as flying. Aero design and controls are not my expertise though, so this has been a trying but enjoyable learning process. Thanks to the knowledgeable folks here, and other forums, I gleaned enough tips to go for my own 100 km attempt.  Enough about me - on to the plane and flight! 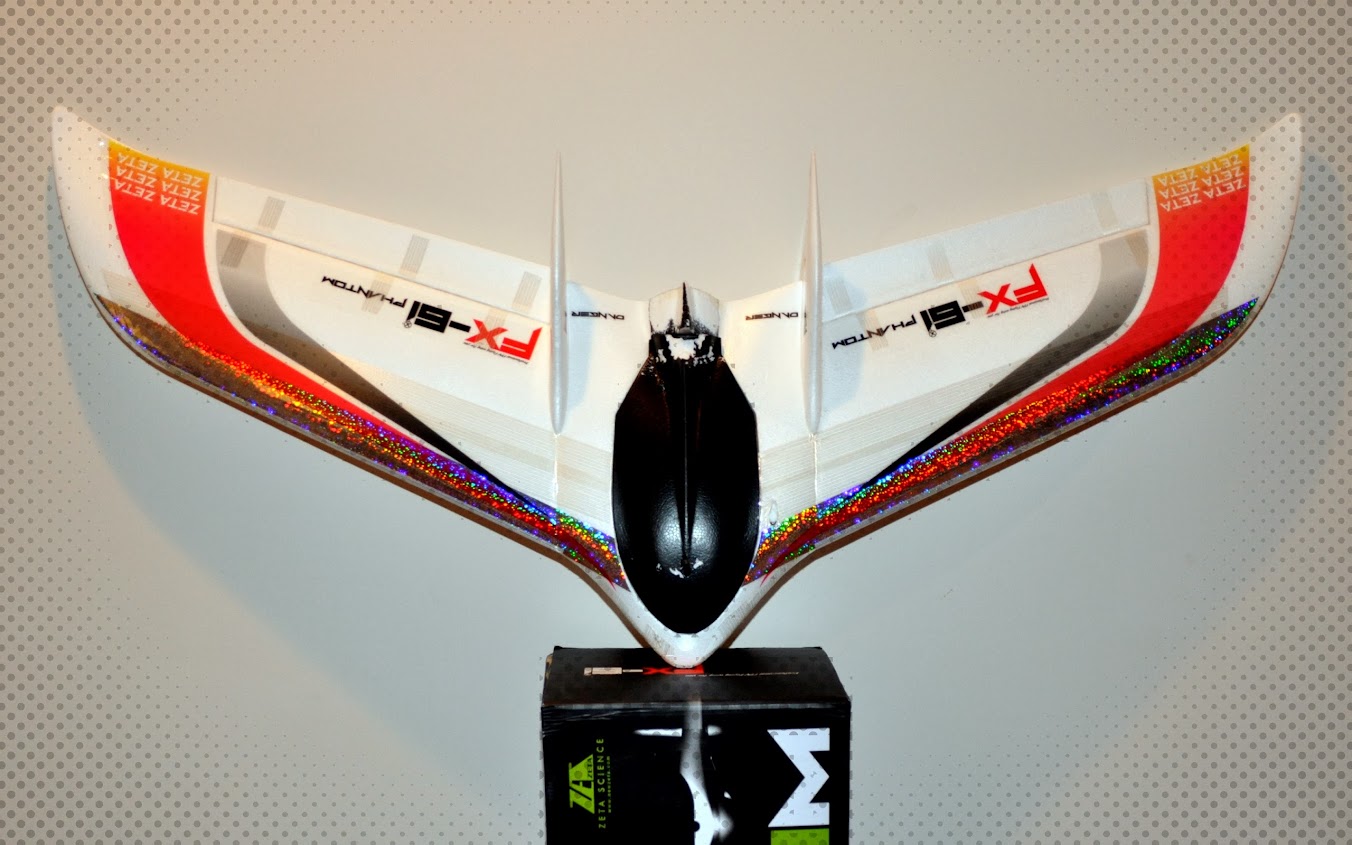 I chose this airframe because I have some experience with wings (DIY foamies), they are generally durable, and I was just tired of fiddling with/fixing my Skywalkers.  Failed launch attempts on my SWs (V6 and 2013) usually meant my day was done and time to get out the hot water and glue.  The Phantom has survived several rough launches and hard landings with very little damage to show.  The worse is to the canopy when it came loose during a cart wheel and was chewed up by the prop.  I also had a motor mount fail on the day of the attempt.  (more on that later)  The Phantom does not appear to be the sleekest of wing designs.  It has fat dual vertical stabs, upturned tips, and a lot of reflex in the airfoil.  It does make for a slow and steady FPV platform, which is what it was designed for.

Printed motor mount extension to move the light motor rearwards and help balance the batteries.  This, along with shaving down the curious horn shaped fuselage end, also considerably reduced the noise of the prop.

On the ground, I ran the latest version of MP with the 3DR ground radio zip tied to a fiberglass driveway marker rod on a 10ft usb cord - very simple and cheap.

I designed the power system based roughly on a discussion here on DIYD.  (Wayne Garris' 170 min Techpod flight)  It was some time ago, and when I went back to check, I realized it was Reto Buettner advising Moglos - who just joined the 100 km club as well!  Well done Reto.  You should start charging a fee, or perhaps deserve a "100 km master" badge.

I will include the testing/tuning flights leading up to this, but felt this blog entry was getting long.  I'll add the preflights below.

The Flight
The winds were mild last Saturday so I decided to go for it.  There was a window in the morning with the afternoon bringing more wind and rain.  To make certain of the distance I decided to go to 7200 mAh of lipos.  This took some foam removal and a few frustrating hours of getting wires to fit.  I hesitate to cut the heavy gage wires and make a custom power harness, but that is really what should have been done.

My first launch attempt at the heavy weight (relatively) ended in a premature belly landing and flip.  Since I was still on the throttle trying to eek out the launch, the prop hit the ground and tore the motor and mount out.  My AS sensor pitot was also ripped out.  Desperate to fly with no end to crummy weather in the extended forcast, I performed field surgery with superglue and kicker.  I also disabled the airspeed sensor.  The second launch was not much better.  This time I cut the throttle to avoid snapping the motor mounton the ground, but the plane skipped up like a rock!  I hit the throttle and away she went.  Everything appeared to be working properly so I started the WP pattern.  Fast forward a couple of hours and here are the results!

*I have edited the originally reported current valves (and subsequent calculated power values) to the correct values.  Thank you to frederic reblewski for catching the error. 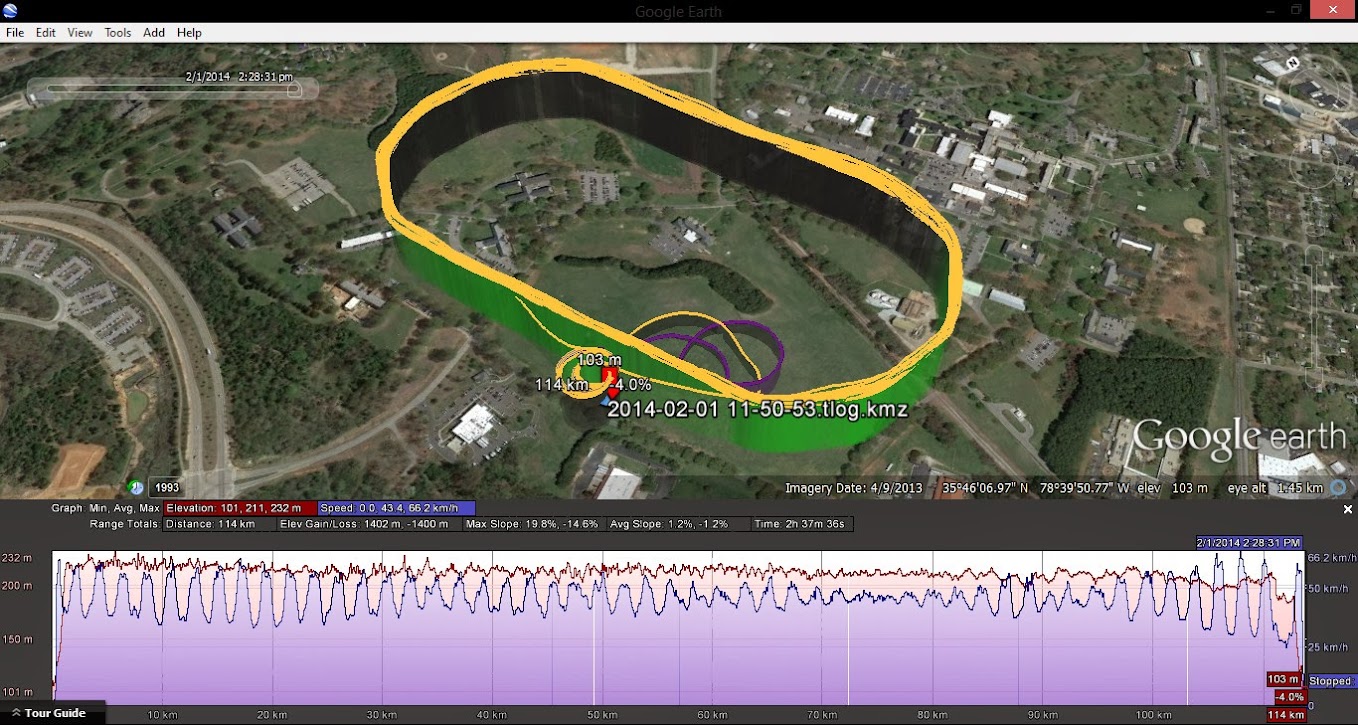 It is strange to be able to photograph your own plane in flight. 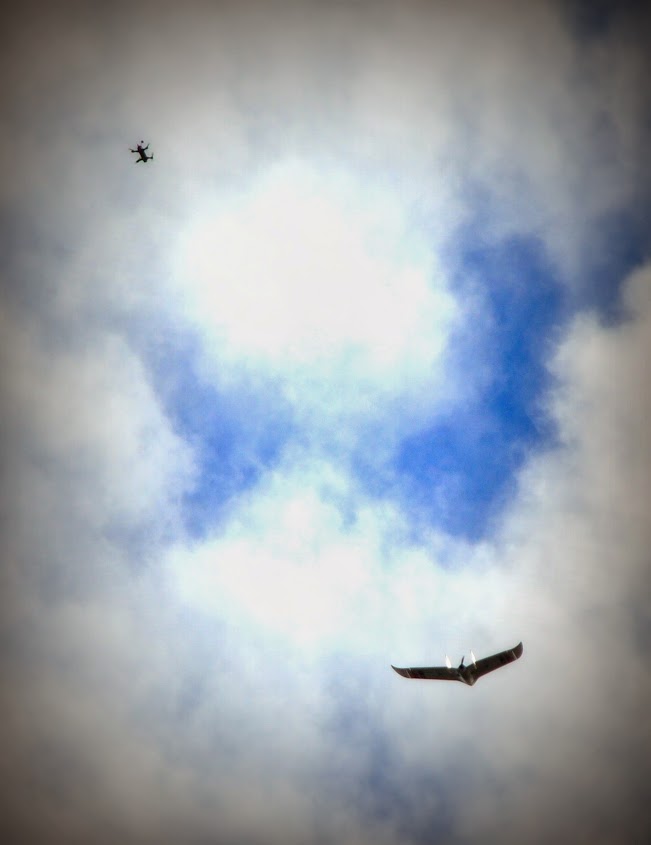 Two of the guys flying FPV quads actually chased the plane around its circuit.  I got to experience a chase plane view of my Phantom as it navigated to WPs through a spare set of goggles!  One even advised me that my plane seems to be speeding up and slowing down throughout the flight - which was later confirmed in the tlog.  This was an unexpected treat to have a full scale flight instructor giving feedback from a chase "plane" like a real prototype flight. 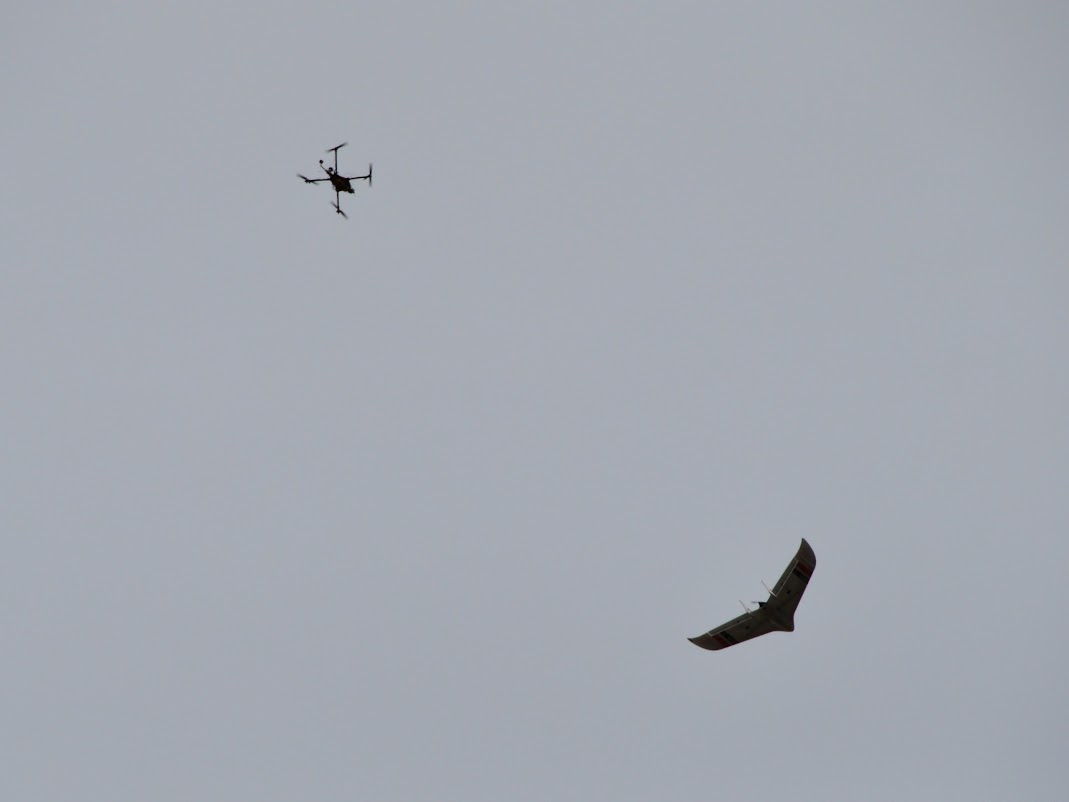 Due to the early launch issues, the tail end of my flight missed the target window and the last 20 km of the flight were in gustier winds and light rain.  I still had plenty of juice left, but the conditions were worsening, so I brought her in.  After a 114 km flight, I greased the landing within 10 ft but still broke the motor mount off.  Resting voltage was still 3.75 V per cell.

All in all, it was a spectacular day in my book - one of the best days of flying in a long time even though I was on the sticks for about 3 total minutes!