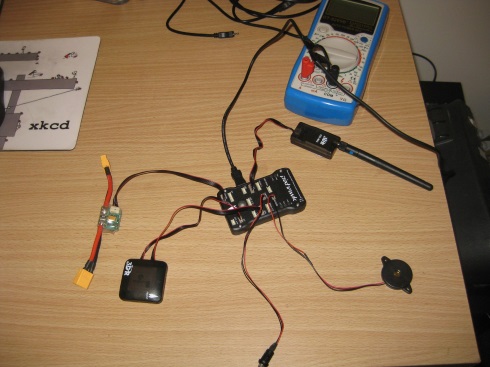 For most people running electric vehicles, it has always been assumed that the motor(s) will always use far more power than the flight controller and associated control systems.

However, for those people running internal combustion engines (or gliders, balloons, etc) for long duration flights the question of power consumption of the flight controller becomes a much more important question.

I spent some time measuring the power requirements of a Pixhawk flight controller and thought I'd share the results with the community.

I cut up a USB cable in order to run it through my multimeter. The same was done for another cable with an XT60 connector. This would allow current readings over both USB and battery power. Of note in the above pie chart is the GPS module uses almost 1/5 of the total current requirements. The Pixhawk itself uses the vast majority of the power, as expected (with its comparatively high-powered CPU and many diagnostic LED's).

There was very little difference with the APM:Copter and APMRover2 software running in both armed and disarmed states. All 3 APM branches are consistent with their power usage.

Moving on to the other 2 power supply inputs (Pixhawk power module, ESC into servo rail), it was noticed that the main LED on the Pixhawk is very high powered - on the order of a 1/2 Watt.

In comparing the different power supplies, using total power consumption (Watts) is most appropriate. Note when using USB power the USB port on my PC was measured to be 4.5V rather than the 5V standard. 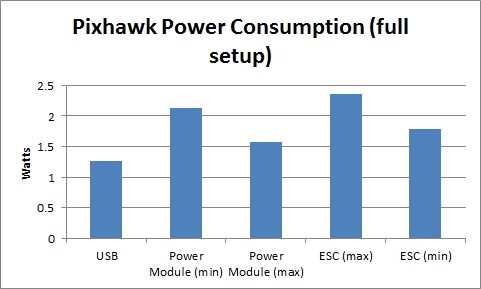 The above chart uses a full (GPS, compass, radio, safety switch) setup. The “min” and “max” refer to the power draw with the main LED of the Pixhawk off and on respectively.

The Pixhawk does use more power when connected via battery. I put this down to the various LED’s (and possibly a few IC’s) using more power as they would be operating at a higher voltage (5V clean power vs the 4.5V USB power).

The difference between the power consumption via the Power Module and via the ESC would be likely due to a lower efficiency 5V regulator in the ESC. However, the gap (~0.3W) seems a little wide to account for all of it. Some of it may be due to the way power is routed through the protection diodes in the Pixhawk.

Next is a comparison with the old APM2. The APM2 uses a far less powerful processor (both in terms of power usage and data processing capacity) and has fewer sensors on-board. So it would be expected to use less power: 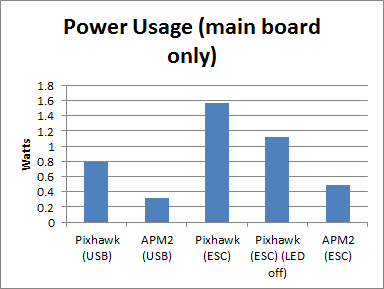 The APM2 uses roughly 1/3 as much power as the Pixhawk (not including external components). The APM2 is remarkably efficient with its power usage – a maximum of 0.5W!

Putting this together with the appropriate external components and a standard Lipo battery gives us an expected operational time: Once the GPS, radios, etc. are included, the gap between the Pixhawk and APM2 narrows. Using a standard 3-cell 2000 mAH battery gives in excess of 8 hours operating time for a Pixhawk and over 10 hours for the APM2, which allows for some very long-duration flights.

In conclusion, for a standard Pixhawk setup, allow 2 to 2.5W power consumption. If this is an issue, look at disabling the main LED and removing non-essential external components.

If power consumption is truly important, it would be worth going back to an APM2, which only uses 0.5W by itself.