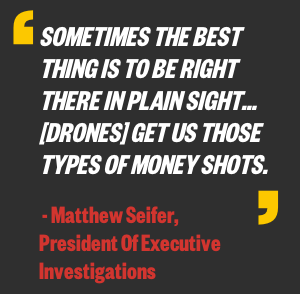 From the NY Daily News:

They’re private eyes in the skies.

Investigators are taking drones to new heights — using the remote-controlled aircraft to catch New Yorkers cheating on spouses, lying about disabilities and endangering their kids.

“People want you to believe there’s all this negativity associated with drones . . . but they could be a very helpful tool,” said Olwyn Triggs, a gumshoe for 23 years and president of Professional Investigators Network Inc. in Glen Cove, LI.

Triggs recently used a drone to find an upstate man suspected of insurance fraud. Signs on his rural property warned that trespassers would be shot, so she sent in her 2-pound, foot-long Phantom 2 Vision quadcopter, which costs about $1,000.

“He was supposedly fully disabled,” she said. “We knew he was active but couldn’t prove it because of the layout of the property. I couldn’t risk being shot.”

So, as a drone hovered above, snapping images of the man chopping wood, Triggs manned the controls from behind a vehicle about 1,000 feet away.

“You need to think outside the box when someone’s acutely aware,” she said, adding the fraudster pretended to walk with a cane. “That’s when you’ll consider using a drone.”

Still, the legality of piloting drones is a gray area.

The Federal Aviation Administration deems it illegal to fly them for commercial use, including film and television.

But since a federal judge dismissed a $10,000 fine against a commercial drone user in March, many businesses are going ahead and flying them anyway.

“A lot of PIs bought drones [after the ruling],” Triggs said. “But before you use a drone, you’re calling everyone you know just to be sure.”

Matthew Seifer recently pretended to test-fly a drone in Central Park. He was actually recording a husband fooling around with a female coworker from 100 feet away.

“Sometimes the best thing is to be right there in plain sight,” said Seifer, president of Long Island- based Executive Investigations.

“We had to get in and get out real quick,” he added. “We deployed a drone for eight minutes and got five minutes’ worth of video. That was the closure our client was looking for.”

Seifer operates several Phantom models, including the Phantom 2 Vision, and said drones are a “selling point” for clients.

Firms like his are charging double for their use — hiking the hourly rate from $47 to $97.

In another recent case, Seifer was having trouble tailing a fast-driving Long Island doctor suspected of hanky-panky. So the PI parked behind a steakhouse where the doc had taken a lover.

“We raised the drone above the restaurant, [and] he was engaged in a sexual act in the front seat of his car,” the investigator said.

“[Drones] get us those types of money shots.”

Drones have also been used in custody battles.

This year, Seifer’s team sent a drone to Sheepshead Bay to record a dad drinking and partying on a boat with his kids.

The PI snapped the boat’s serial number and images of the kids, who were not wearing life jackets, from more than 300 yards away.

He recently helped a homeowner in another state file an insurance claim against tenants accused of running a dogfighting ring.

“We couldn’t get access to the back of the house through regular means,” Seifer said. “We utilized the drone to get evidentiary video of doghouses, chains and certain individuals.”

He turned over footage to authorities, and four people were arrested. The tenant lost his lease.

“Clients are amazed,” Seifer said. “The drones are a game changer.”