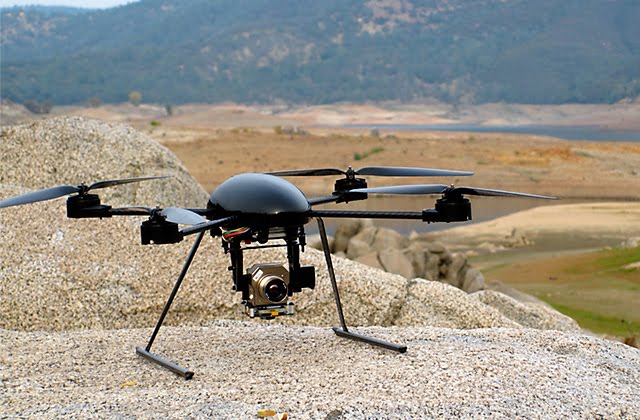 Mounties in Saskatchewan are crediting a high-tech drone for the rescue of a man who had walked away from his vehicle after a rollover crash and could not be found.

Sgt. Doug Green, who deployed the drone in the search, told CBC News the machine was built and designed by a Saskatoon company, Draganfly Innovations.

"It's a small little four-armed helicopter that has the capability of a camera or a FLIR [Forward Looking Infrared] or a low-light camera attachment that has a video link right back to the hand-held controller that I fly it with," Green explained. "I see exactly what the camera is looking at and I can control the camera up and down."

RCMP are trying out Saskatoon-made drones. A Dragan Flyer X4-ES was used to find an injured man who wandered away from a roll over crash. (Draganfly.com)

Green said the drone used a FLIR camera which detects heat from an object during Thursday morning's rescue.

He said that in most highway crashes, victims are found near to their vehicles or within about 200 metres.

In Thursday's case, Green said the man suffered a head injury and was disoriented.

"He just, instead of phoning right away, he wandered off and got lost in the dark," Green said, adding it was cold, the field had water in it and the wind was picking up. "He was wet and cold."

Green said the RCMP have been using the Dragan Flyer X4-ES for just over a year in a series of trials to determine how they might assist different elements of police work. Green was equipped with one for use in traffic analysis.

"We're still just trying out different platforms," he said, adding that five officers have obtained the necessary training and licences from aviation authorities to fly the devices.

More Info on the RCMP operations: