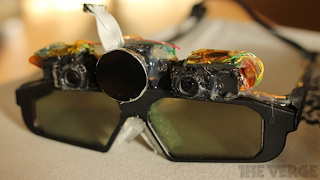 Long ago after she disappeared from Goo Tube, there was a story about her getting sh*tcanned from a startup that was doing this ridiculously complicated VR project & now she was trying to sell it alone. It sounded like they hired her to do this idea which they thought of, then she got attached to it, but in actuality it was her idea all along.


There must have been a huge ergonomical benefit to using head mounted projectors, a head mounted webcam, retro reflective material, IR leds, active shutter lenses. The only obvious advantage is it could include practical objects in the VR world.


Detecting head position is a huge win for VR glasses. It's hard to see why no-one has done it. It's very hard to track the position of an indoor object, but VR glasses aren't constrained by the requirements of a flying vehicle. The ambient lighting required by machine vision can be controlled. The update rate doesn't have to be fast.


She could have probably already shipped something really basic, with low definition & bulky electronics, but she doesn't seem to have a final product in mind, just endlessly trying to reduce the size & increase resolution.  Something really complicated with no obvious goal is the kind of thing that makes money from the crowd.   She conceded that the reflective material is too cumbersome & offered a glasses mounted reflector while still sticking to the head mounted projector.  It might be a case of being too far invested in the projector idea to go back to the simpler glasses mounted display.


The 1/2 million raised so far may seem like a lot, but it took lots of trade shows, traveling, & knocking on doors, not just signing up on kickstarter. There seems to be an infinite amount money available from crowdfunding, for a certain price.  Everything alive & breathing now seems to get at least $100,000, but there's obviously a limit. A lot of projects have to not get anything for the few to get $100,000.  The money tends to concentrate on the Rube Goldberg machines.