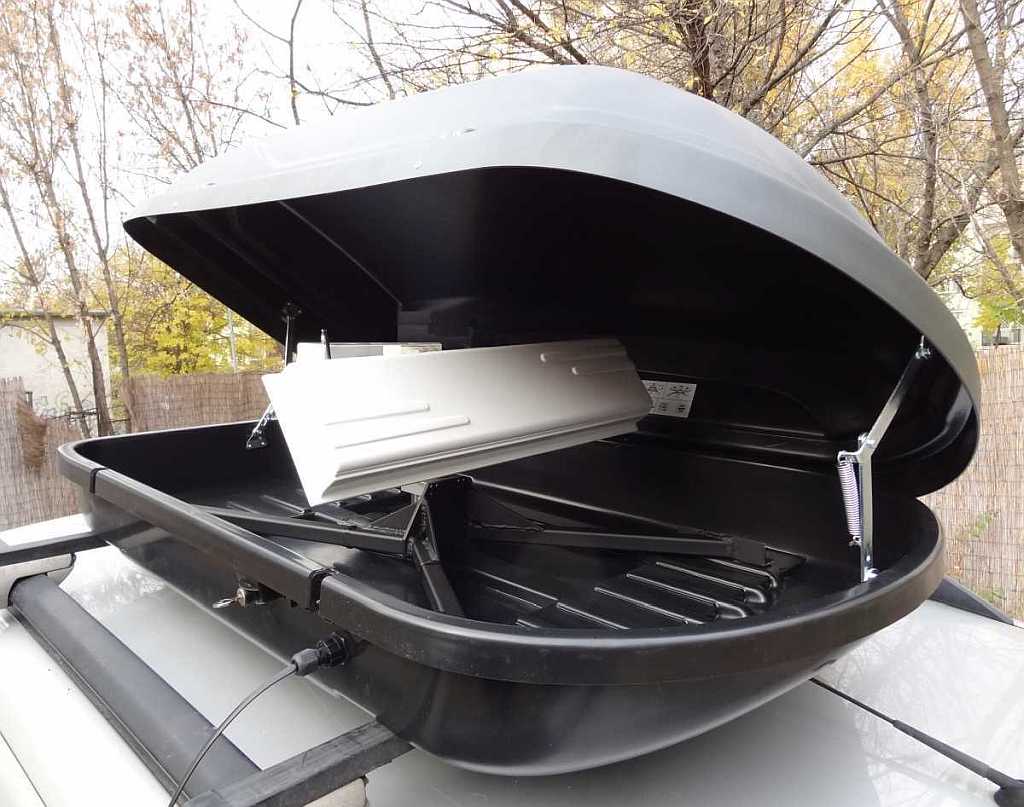 It’s probably time to provide some background to my blog posts on various ground control stations we’ve been designing and manufacturing, because our experiences over the years may give some food for thought for fellow UAV/USV developers.

Already in early 2010 it became clear that the multirotor revolution, the boom in FPV RC and especially various autopilot development projects like ArduPilot would eventually amount to something substantially different in this field. Even though there were thousands of companies starting to make birds at all levels of sophistication, everything was still controlled by toy or hobby grade remote controls and a seemingly haphazard collection of improvised devices with a crazy cable clutter. If we're honest about it, not an awful lot has changed in the general look of the ground end since then for many UAV development projects.

We have also tried to do our best with our own fold-up hexacopter and ground vehicle projects creating application specific integrated control units using whatever was available at the time, but it soon became apparent that hobby RC parts are not the way to go. Because our process control and CCTV history has already provided experience in serious industrial standards, the transition to a more robust and reliable approach was very much inevitable. Still, looking back at the early years of specialisation in ground control stations we can't help but remember some mistakes that were made both in R&D and business development. There are some important lessons that we have learnt (and apparently still learning) in this process. One of these is that while it's always imperative to listen to your customers, you don't always have to take their word for what they think is right, or it is in fact what they actually want. It has to be said that earlier in the development the willingness to please has also driven us much towards accommodating sometimes even impractical or downright crazy customer requirements against our better judgement without putting up a decent fight.

Because most of the early customers were still in the vehicle development phase, hardly any of them had a clear vision of how their products will be used eventually, and neither did we, necessarily. Clients were also concentrating too much on demo flights, presentations and trade shows, not the actual final products or users themselves, simply because these demos were seen as the most important first steps for the initial sales or in attracting venture capital. This resulted in an overwhelming abundance of open application questions, way too universal control options and layouts, but most of all, ground control stations that were still too big, heavy and cumbersome.

Although most of our current clients already have a clear understanding of their specific UAV or USV application and their target customer, the big presentation screen issue is still around after all these years, and it doesn't seem to be going away any time soon. The main reason is nevertheless similarly flawed: The bigger the better.

While the need for huge mapping and video downlink displays can easily be accepted in static, container or large van-based stations, hauling around a 20-30kg GCS case as a "portable" unit just because the images may look better in big is just plain mental. If the necessary dimensional trade-offs are to be made at any component, it's clearly the screen size. Not only that monitors are the single largest devices in nearly all stations, but high nit sunlight readable panels above 10"-12" are horrible current hogs, so you also have to double or triple your built-in battery packs just to reach a decent level of autonomy. 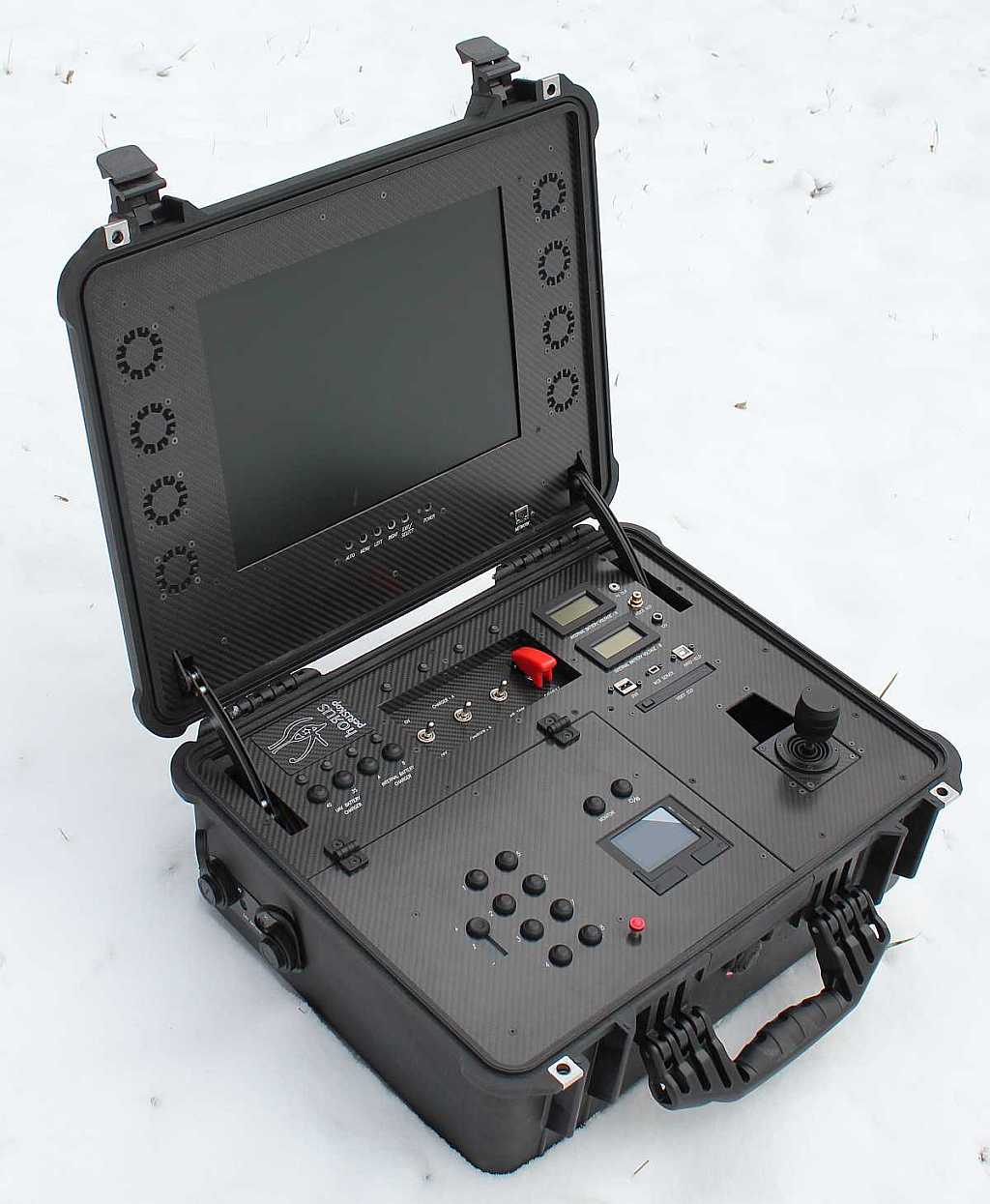 Side-by-side large dual screen systems are also an ongoing concern for many end-users. Because there are a number of similar station examples out there for some time now, until you've actually used one of them, you would think that they are great for dual operator applications. Once you sit in front of one of those you soon realise that even if it's an extremely long rifle case, you just can't seat two people there without their shoulders touching. This is not a comfortable setup for any operator duo, because they will only see their screens at an odd angle while still continuously elbowing each other. Two screens in the same box can still be a great solution for some heavier applications, but they are both for the same operator nevertheless. 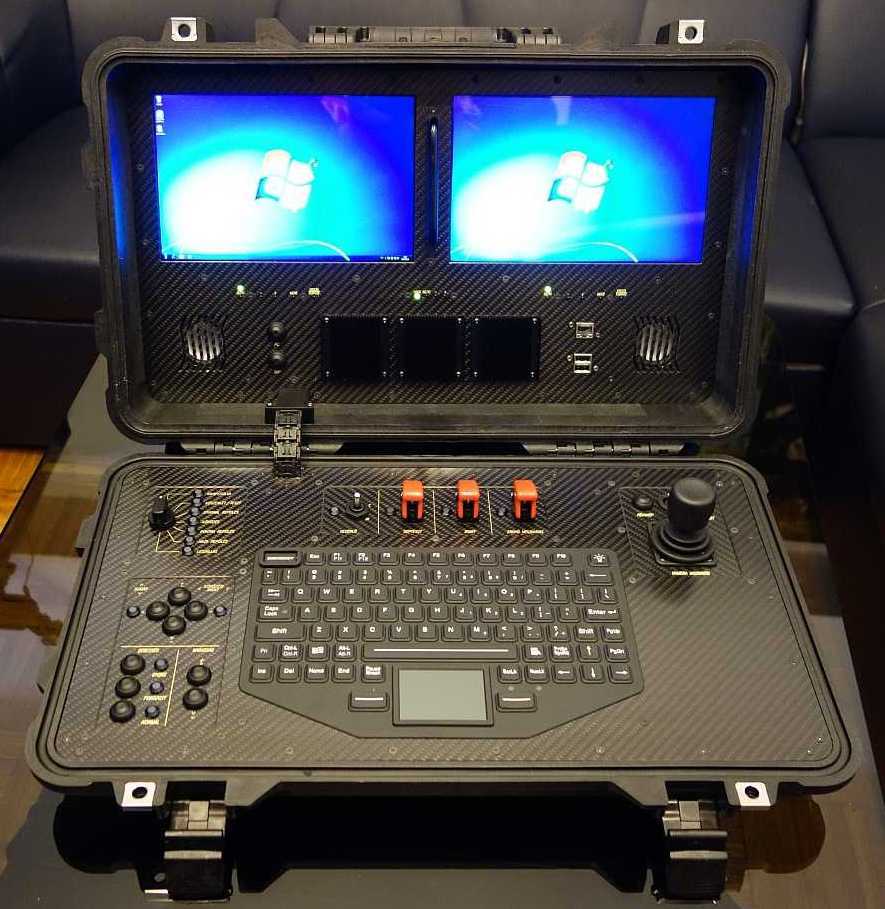 Dual and triple operator scenarios require separate controls and displays for every crew member, but at least these can be fully customised, so the added ergonomy doesn't necessarily push the costs up. Out of a standard pilot-payload dual operator setup the latter will only need camera controls, the video downlink screen and maybe a map section view letting the pilot concentrate fully on waypoints, telemetry and direct flight controls. This considerably simplifies both units and makes a station setup extremely flexible.

Fully rugged industrial laptops or tablets were usually part of such huge rifle case stations, but their use for mission control is always an interesting option, since nearly all the features are seemingly built in there. However, the net weight, size and the connection ports placed all around the frame make these extremely hard to use as hand-held devices or even embed them in a full function GCS. There are some fully automatic UAV applications where they have their place, but direct manual controls are a must in the majority of cases and as emergency overrides, especially for regulatory reasons in many jurisdictions.

Of course, you can use a modified docking station to evade having to use the awkward individual frame mounted side connectors, but that still leaves you without direct vehicle or payload controls. Unless you seriously think that a touchscreen joystick is a professional option, there’s no way around making the entire unit a tad bit bigger to accommodate these controls. 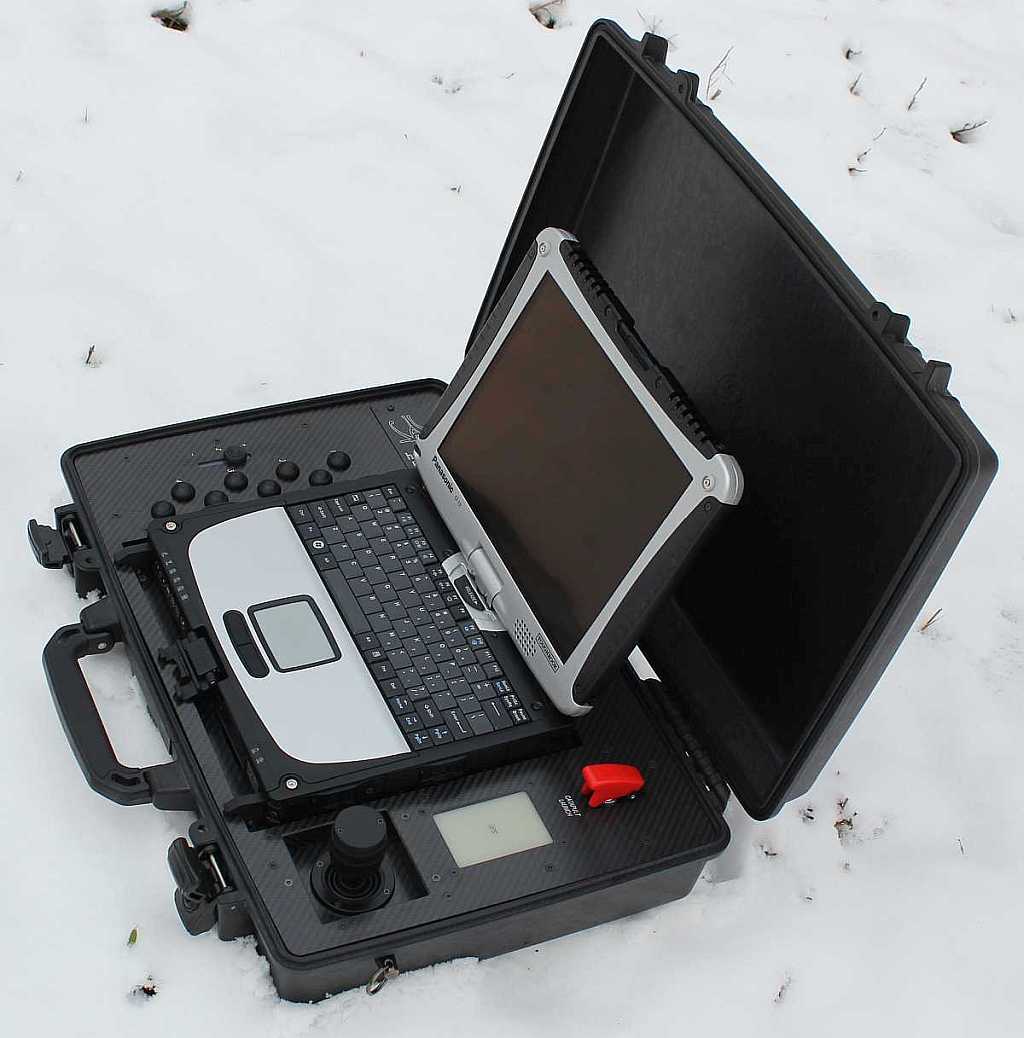 Another interesting general image of most current UAV operations is the crew standing or sitting outside with their big station on a portable desk and the antennas mounted on tripods beside them. If you've ever been involved in such a field day endeavour you know that just the preparation and the wrap-up itself adds at least an hour to the proceedings, while you are constantly exposed to the elements. If you already reach your field location most of the time by car or a van, why not keep your options open with a man portable size control station or a vehicle based built-in type that allows operation from inside the vehicle itself? 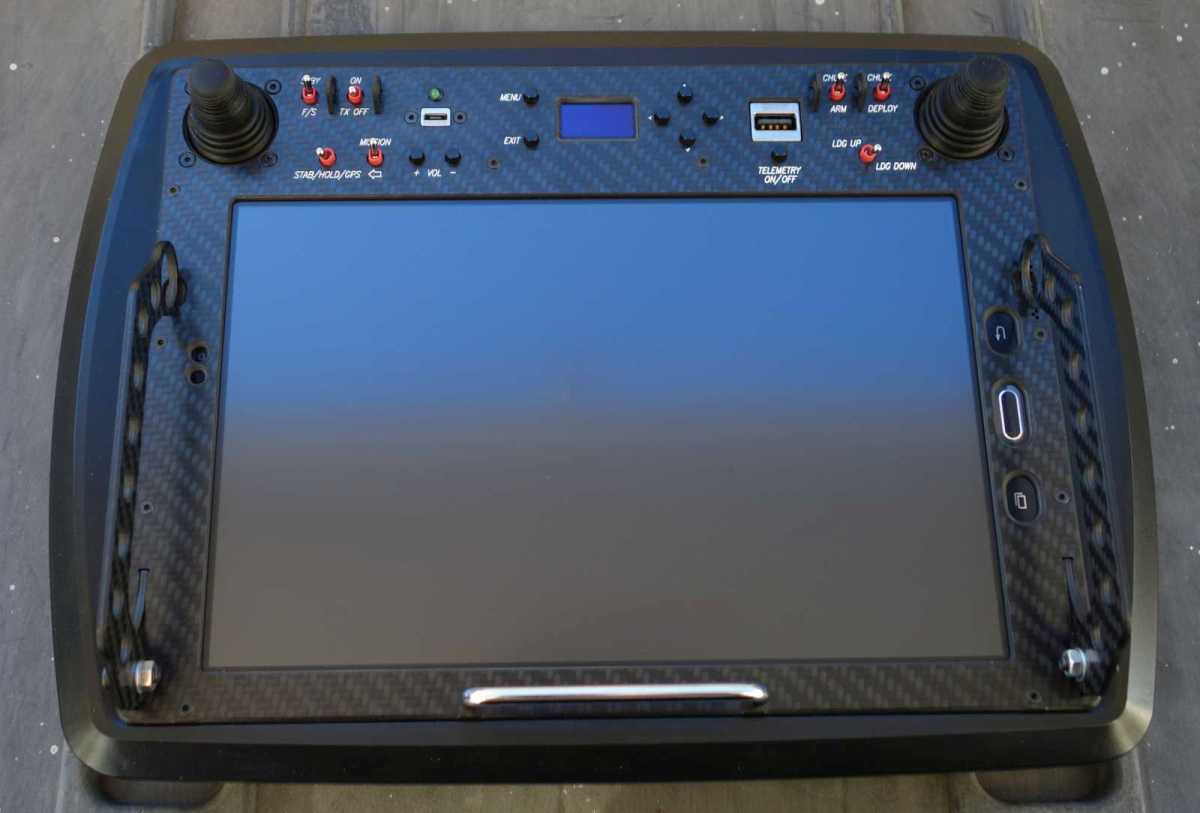 Of course, if your RF modules are embedded in your GCS, you have to opt at least for some mag-mount antennas on coax extensions, so you can get your signal out of the Faraday cage of your car, but that's really not the solution. Gigahertz signals are highly attenuated even on short stretches of coax, that's why antenna cable extensions should never be used in any GCS setup.

Unless you are only working at LOS ranges you should always be using a separate RF box, because the best position for the operator is never the ideal location for the antennas for obvious reasons. If your RF modules are installed in this compact external unit literally at a pigtail's distance from the antennas mounted on it, only digital and low frequency analogue signals have to travel along any length of cable. Being able to mount this box on top of your van, tripod, mast or even the pan axis of an antenna tracker gives you the real flexibility of a professional grade modular mission control station. As more and more direct feedback comes from end-users, sometimes you must remind developers and manufacturers what operator preferences really are. It's always a tough job, because there are some egos involved, and you don't want to present yourself as a know-it-all, especially when you understand all too well that it's a continuous learning process on both sides.

Just our two cents worth...

The peRISKop team is a group of professional UAV-USV specialists heavily involved in remotely operated vehicle design and development since 2008. Coming from a technical security, RF, industrial control, imaging and speciality CCTV background we have soon realised that our efforts are best spent at concentrating on the missing or underserved areas of UAV systems development.