The SF40 is a smart sense-and-avoid system that detects obstacles near autonomous vehicles and determines the safest route past them. On-board data analysis reduces the need for complicated processing by an external computer. The built in analytical tools can sense the presence and position of obstacles and locate gaps and spaces with sufficient clearance for safe navigation. Hard-wired alarm outputs make it easy to interface the SF40 with conventional flight controllers and a serial port connection allows for greater interaction when navigation becomes more complex.

How the SF40 works

The SF40 uses a scanning laser rangefinder to measure on a 360 degree disc with a radius of 100m. Collected data is stored in memory and continually refreshed as the laser scans around. The speed of rotation can be set from 1 to 5 revolutions per second corresponding to different measuring resolutions of between 0.03 and 0.25 meters. Time critical functions are managed by an FPGA leaving the 32-bit Arm Cortex-M3 processor to handle the data analysis and monitor system performance and reliability.

Data analysis takes place asynchronously from the data collection so that numerous independent calculations can be carried out very quickly. An analytical tool kit provides the framework for making navigation decisions. Some of the tools run autonomously, such as alarm conditions that are evaluated continuously without the need for intervention by the flight controller. Other tools answer high level navigation questions such as “Is it safe for me to change direction?” or “Which way should I go now?” Tools can be used sequentially and in combination with the situational and internal status information to create sophisticated macros that can handle numerous mission requirements.

Here are some of the navigation tools:

Seven configurable alarms zones can be set within the measuring plane to alert the vehicle when an object gets too close. Each zone can be set with an individualized alarm distance, angular width and aiming direction. For example, one zone could cover 360 degrees around the vehicle at close range to alert when people get too close to the moving parts. A forward looking alarm zone can be used to detect obstacles in the direction of motion. Other alarm zones can check that specific directions are clear of obstructions before course changes are made.

The status of the alarms can be read from the serial port and any two alarms can be linked to the hard-wired outputs. The alarm zone definitions are stored in non-volatile memory making them available immediately when power is applied. Once the SF40 is running the alarms are updated continuously without the need for any external commands. 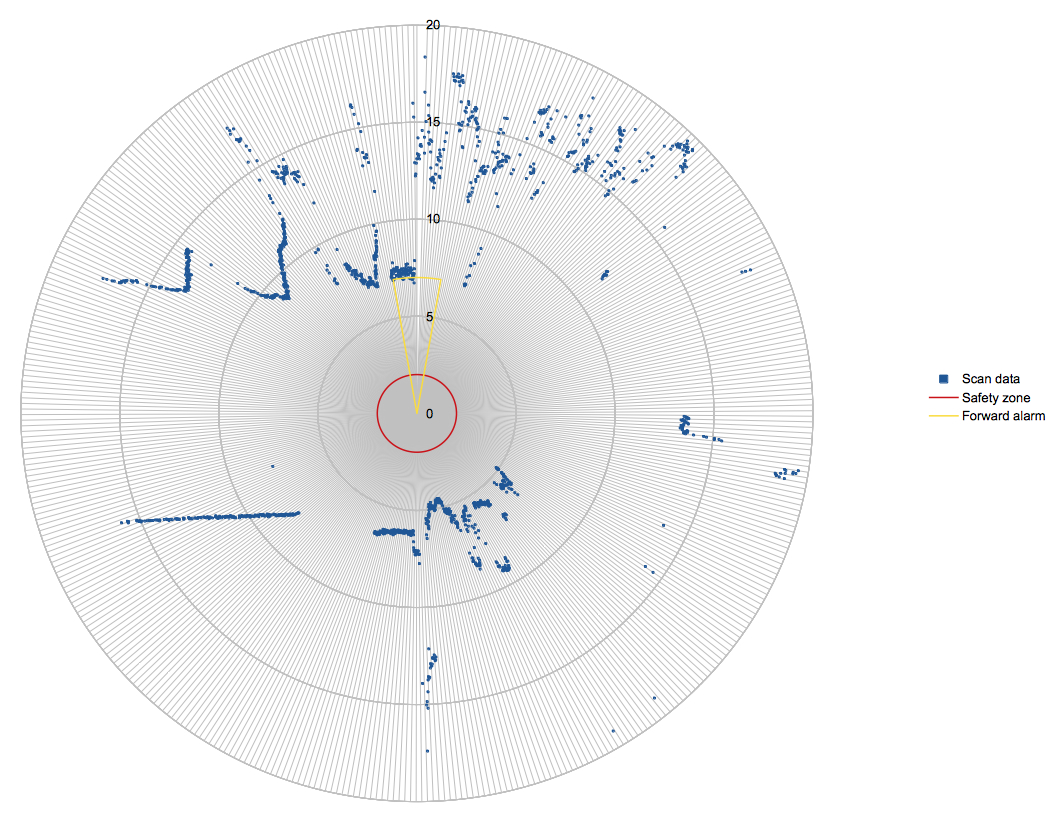 Two alarm zones are overlaid on the SF40 data:

In this case the forward alarm has been triggered by an obstacle.

The SearchLight tool answers two navigation questions. The first is, “Can I safely change to a new direction?” The second is, “Where is the closest obstacle in that direction?”

SearchLight checks that a corridor is clear before the vehicle changes direction. It can be aimed in any direction on the measuring plane and the beam divergence adjusted to cover the width of the corridor of interest. SearchLight finds the closest obstacle within the corridor and reports its distance and angle from the present flight path.

SearchLight is used to confirm that direction changes are safe before they are made rather than waiting for the alarms to warn that a hazardous situation has arisen after the direction change has been made. Several SearchLights can be used together to triangulate the vehicle’s position between fixed objects and wide beam SearchLights can be used to check for clearance in different quadrants. 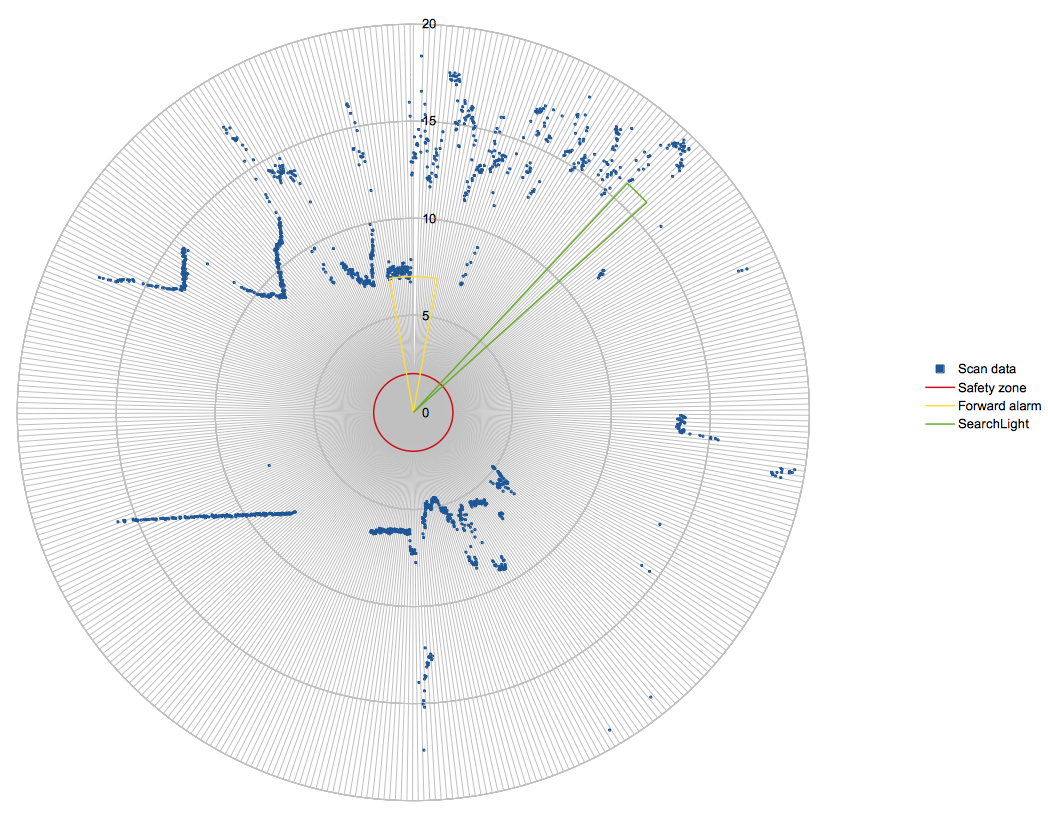 for space at 45 degrees to the right of the flight path. SearchLight has found obstacles

along the proposed path and warns the flight controller.

The Navigator tool answers the question “Which way can I go now?” It examines a specified region and finds the direction of the clearest pathway. The results can be used to direct the vehicle into open space and away from obstacles.

Navigator can be run at any time or activated when a forward looking alarm zone detects an approaching obstacle. The flight controller can configure Navigator with a directional bias so that the recommended escape route is away from known hazards. This can be useful during search and rescue missions when flying close to a cliff face. A bias away from the cliff face would be the safer option. 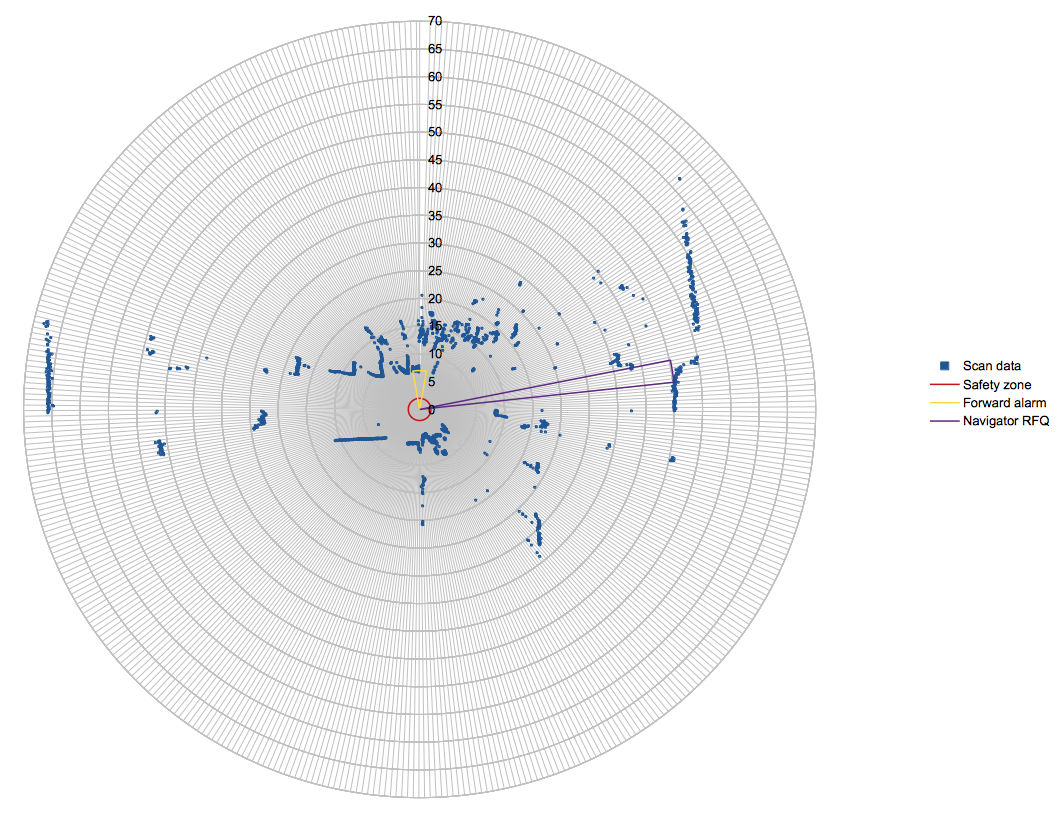 The flight controller asks Navigator to search in the right front quadrant for an escape route.

There is one safe passage that is clear for 45 m. to find a better corridor in the front left quadrant. Navigator finds a

The virtual laser range finder (VLRF) tool is used to find the distance in any direction on the measuring plane. VLRF can assist with keeping station at a fixed distance from a target or measuring how far away an obstacle is. Any number of VLRFs can be created that aim in different directions. This allows for accurate position holding within a confined space and provides confirmation of GPS location using buildings or other known structures as reference points.

The Mapping function provides detailed two dimensional maps in polar coordinates of a specified region. These maps can be analyzed by the host controller so that additional measurements or navigation decisions can be made. This is a conventional SLAM mapping feature that won't be needed on most missions.

In addition to collecting and analyzing data from the scanning laser, the SF40 continuously monitors the status of internal systems and the status register can be read by the host controller. System status checks include monitoring the battery voltage, the smooth running of the motor and the correct functioning of the laser. Status flags can be linked to the hard-wired alarms to provide a warning of critical system faults, such as the battery running low.

There is provision to control an external servo motor that can be used to position the SF40 or for any other purposes. The end points of the servo can be trimmed to allow for precise positioning using commands sent through the serial port.

A spare digital input is continuously monitored and its state is reflected in the system status register. This input can be linked to a hard-wired alarm and read using the serial port. This could be used as a landing switch indication.

The SF40 includes a high performance motor controller and efficient power supplies that allows it to run from different battery types and voltages ranging from 6.5 V DC up to 30 V DC. The power consumption is constant at 4.5 Watts.

I hope you enjoyed this brief update :) LD