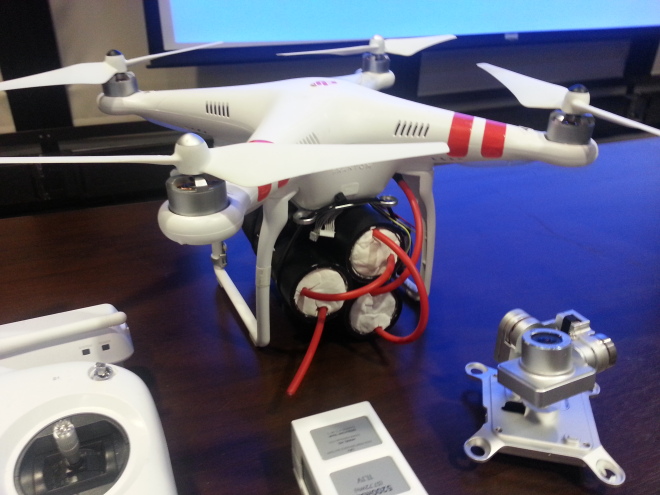 We have a standing policy here at DIY Drones of no discussion of weaponizing drones, but the White House incident was so important and this Wired article so illuminating that I'm going to make an exception this time. From Wired:

If you want to understand why the government freaked out when a $400 remote-controlled quadcopter landed on the White House grounds last week, you need to look four miles away, to a small briefing room in Arlington, Virginia. There, just 10 days earlier, officials from the US military, the Department of Homeland Security, and the FAA gathered for a DHS “summit” on a danger that had been consuming them privately for years: the potential use of hobbyist drones as weapons of terror or assassination.

The conference was open to civilians, but explicitly closed to the press. One attendee described it as an eye-opener. The officials played videos of low-cost drones firing semi-automatic weapons, revealed that Syrian rebels are importing consumer-grade drones to launch attacks, and flashed photos from an exercise that pitted $5,000 worth of drones against a convoy of armored vehicles. (The drones won.) But the most striking visual aid was on an exhibit table outside the auditorium, where a buffet of low-cost drones had been converted into simulated flying bombs. One quadcopter, strapped to 3 pounds of inert explosive, was a DJI Phantom 2, a newer version of the very drone that would land at the White House the next week.

Attendee Daniel Herbert snapped a photo and posted it to his website along with detailed notes from the conference. The day after the White House incident, he says, DHS phoned him and politely asked him to remove the entire post. He complied. “I’m not going to be the one to challenge Homeland Security and cause more contention,” says Herbert, who runs a small drone shop in Delaware called Skygear Solutions.