It's interesting that the article leads with a photo of a hexacopter, calls it an octocopter, and the drone bounty being discussed would reward people for turning in "identifiable parts of an unmanned aerial vehicle whose markings and configuration are consistent with those used on any similar craft known to be owned or operated by the United States federal government".  So, presumably it's nothing to do with multi-rotors or hobbyist craft, but that's what they include a photo of?  Sigh.

A number of people have expressed interest in building quads based on mine, and using my software.  In order to help get them set up quickly, I've started working on a real-time diagnostic and setup tool that interacts with my quad flight software.  My flight software looks like it'll be compatible with at least one commercial board (the HoverFly Sport) as we use the same MPU and gyro sensor, so you'll be able to buy their hardware and try my flight controls if you like.

Here's a quick preview of it - the programming is all working, but I have to test all the motor and gyro configurations to make sure I haven't messed anything up before releasing it.

I realize this isn't a new idea, but I figure there are a few people here who will be interested in this when it's ready. 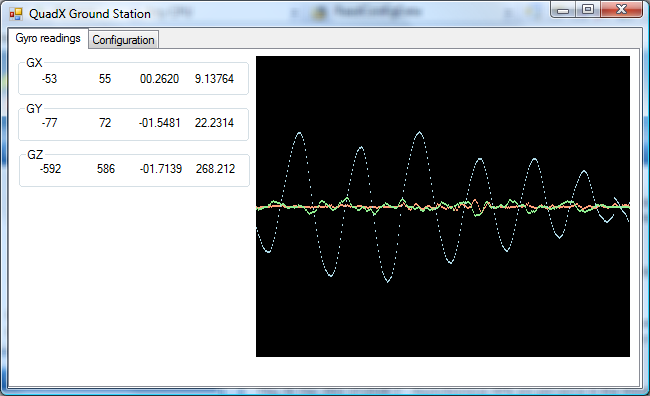 Here's a better video of my latest quad / code. I doubled the maximum angular rates in anticipation of some stunt flying. I probably still have to bump them higher, but I wanted to see how it handled, if it affected stability, and so on. It's just as stable, but much more nimble.

I've done some more work on the stability code in my Propeller-based quadrotor and gotten significantly better flight performance.  It still needs some tuning, but all my oscillation problems are gone.

Walking around outside the office:

Here's a look at the latest iteration of my Parallax Propeller based quadrotor.  The current implementation uses an ITG-3200 3-axis gyro as the only stabilization sensor.

...and an outdoor flight:

This is a Parallax Propeller chip running a partial implementation of Premerlani and Bizard's work on Direction Cosine Matrix computation for orientation sensing. I'm hoping to use this in a quad-rotor without a GPS or magnetometer - I wanted to see how good the algorithm was at stabilizing pitch and roll.  So far it looks very promising.

All the work is done on the Propeller itself. It reads the gyro and accelerometer values on one core, and computes the DCM from those readings on another core. At this point the code is still written in the high-level language, Spin. Since all the math is fixed point, there's a strong chance I won't actually have to write an assembly version - I haven't timed it yet, but my update loop is running at 200Hz, so it's at least that fast.


This post over at the Parallax Forums contains source:http://forums.parallax.com/showthread.php?131022-Propeller-DCM-Now-with-source
Read more…
Here's a video of the most recent flight of my custom quad rotor. It's built and programmed from scratch, and uses a Parallax Propeller chip for processing and an ITG-3200 3-axis gyro for stability.
I still have a bit of oscillation, but it's intermittent. If anyone recognizes the behavior exhibited at ~0:45 I'd be happy to hear suggestions on how to correct it. I'm using proportional and derivative (no integral) to keep the integrated gyro values in line with the integrated results from my remote control input.
The crash was all me, but thankfully it was fixed in about 2 minutes. :-)
Read more…