A free tutorial on creating Digital Elevation Models (DEMs) from Photosynth point clouds is now available online.  The tutorial focus on using mostly free and Open Source software to create detailed georeferenced 3D models from low altitude aerial photographs that have been processed in Structure from Motion (SfM) software like that found in Photosynth and Bundler.  Each step of the process is documented in text and illustrations. All of the datasets used and created during for the tutorual are provided for reference.

The tutorial is available here:  palentier.blogspot.com Palentier processes aerial photographs collected from a camera aboard a MikroKopter, or similar Unmanned Aerial System (UAS) then scales, orients and projects the images to real world mapping systems. It does this by analyzing the telemetry data from the UAS and merging it with the aerial photographs. The resulting data is then superimposed for viewing in Google Earth or in a Geographic Information System (GIS) like ArcGIS. Currently, export to Google Earth (KML and KMZ), JPEG world files (*.jpgw), and Leica Photogrammetry Suite's "initial exterior orientation" file format (.dat) are supported.

Palentier is available for free (as in please donate) at www.palentier.com

Palentier is written in Java and was created by M. Stange and Mark Willis (willis D0T arch AT gmail D0T com).

Hello all, I've been toying around with the MikroKopter Hexakopter as a tool for aerial mapping and photogrammetry. After a few weeks of learning the ins and outs of the system, I finally had some time on the weekend to test the system for mapping.

In short, we placed Ground Control Points (GCPs) around a man-made ponding area at roughly ten meter intervals (~40 x 30 m in total area). The GCPs were shot in with a deferentially-corrected GPS (~0.1 m horizontal and ~0.2m vertical resolution) and with a Total Data Station (>0.03m vertical and horizontal resolution). We then flew the Hexakopter at 40m above the ground surface in an east-west grid pattern with a photograph being taken straight down every 10 m or so. The camera used was an off the self Canon A540.

The photographs were processed to remove most distortion and dropped into a photogrammetry program. A 0.05 m resolution DEM and 0.02 m photomosaic was created from 22 images. It took about two hours to collect the photographs, and shoot in the GCPs with both the DGPS and TDS. Processing of the imagery was nearly flawless and took about two hours as well. This time can probably be reduced to an hour or less.

Compared to doing this same process with a kite or blimp, I am very impressed with the Mikrokopter (and multi-copters in general) as a platform for high resolution, low altitude mapping. Let me know what you think.

Over the next few weeks, I'll be testing the same process in at a couple of archaeological sites in the southwestern US. I'll share some of those results when they are complete.

Can't wait to play with the truly opensource Ardupilot! 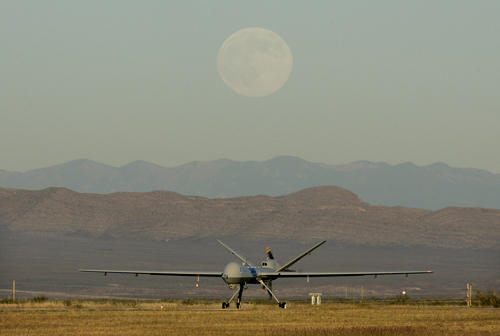 On a visit to El Paso this weekend, I noticed this article on front page of the El Paso Times concerning US border drone use.

One interesting tid bit, "Perez said the Department of Homeland Security and members of Congress have been frustrated with the FAA because it has been slow in approving the department's request for the drones." Sound familiar?

The folks over at Grass Roots Mapping are looking for people with low altitude aerial photography skills to help map the BP oil spill in the Gulf of Mexico.

This may be a good opportunity to show the benefits of UAVs to the community at large.

p.s. I'm not involved with Grass Roots Mapping. Just passing along the info.