So where do I begin with this flying journey? How about this last Christmas. It was the year of… strangely enough remote control toys – yet again. Some years it’s been remote control 4WDs with over-sized tyres, other times, there have been noise making cars, or ones that only turn when you reverse them. Well, cheap infrared helicopters were in this Christmas. We flew them around, bounced them off walls, hit light fittings and dented couches until the batteries ran out, before we would charge them for 10 minutes, use the small charge stored in the capacitor and do it all again.

A few months ago I came across some quadcopters on the Internet. Mmmm… These looked like fun. I was so impressed that I looked on ebay and searched around and found a DJI Phantom Quadcopter for about $300 – well within budget. I thought, that looks like a good deal (because others of the same thing were over $600). As it turns out I got stitched up on eBay. But, PayPal came through for me in the end. (Thanks guys).

It’s a good thing it happened this way though. It started me on a journey to find out more about what these flying machines were really all about and the vast amount that are truly out there. I got my money back, and felt like I had received a bonus $300. Budget now doubled!

It seemed to me there are several different types of flying machines around. To keep it simple, lets just use the word copter, as the generic term. There are several types of these copters around – all with a prefix to tell you how many propellers there are. I’m not going to be talking about planes, helicopters, wheeled devices or tanks as this hasn’t been the focus of my research.

So, the common ones are.

It took me a while to figure out, but the more blades you have – the greater lifting capacity you have – in a basic sense. I like photography and the odd hobby filming, so I thought a hexacopter would be a good start.

As I mentioned, there are many different types, and I’ll try and break it down a little. DIY open source kits which you put together yourself, or; closed source proprietary systems which are generally purchased in a ready to fly kit.

When I say drones/copters I’m not talking about military drones that cost a million dollars to fly, nor am I talking about a Cinestar 8 HL (or an Aus version), or the one used in a recent Top Gear Nile Special. I’m talking about a simple pro-sumer version with a minimum few features – such as GPS and waypoint controls. The ones you can get at a local electronic shop are the toy ones – these are not the ones I’m interested in.

The DJI unit I originally looked at is a proprietary system, though many people have modded them and done add-ons and hacked the frames to accomodate more things, but overall I felt these didn’t have the greater flexibility that their open source brothers have.

The OpenSource model however is a rather different beast. I somehow discovered it and found that there are many people out there all doing really cool things and I wanted to be a part of it. Why? Firstly, the OpenSource model is great because it’s a community collaborative thing, and updates are often regular. Secondly, the amount of people and active members I found at DIYDrones.com was massive. Theres’s a great source of material, and regular content.

There was a problem though. The more I looked at the different options, the more I got confused.

Many years ago, I remember looking at getting a satellite decoder box, because my house had a satellite dish on it. Why wouldn’t you? Free TV channels right? If you start looking up that kind of content of what to buy, how to find the right satellite you discover quickly that it’s a completely different language full of acronyms and words that are only in use in that field. Needless to say, I gave up.

Looking in to the world of these copters has been like that for me. I still don’t have a clue what half of the acronyms are that are dropped, and at the moment – I don’t really care. But, what I have found out, I’ve decided to share so that others won’t be confused like I was.

So, you want a flying copter but don’t know where to start? That was my position and you are not alone.

If you go down the DIY option, this image (source) (and many others like it) is probably one of the most helpful things you can have to understand the basics of what you need to get one working – at least of the electronics. 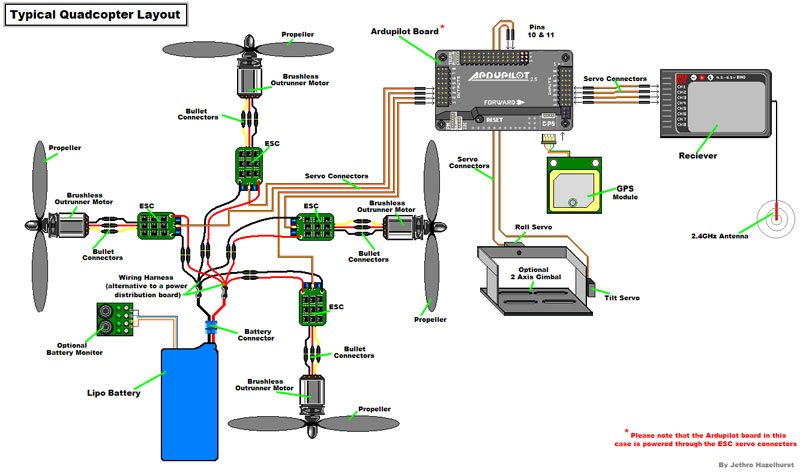 Basically you need the following: (for a quadcopter)

Once I discovered this image, much of it made sense.

I looked at some of the stuff on HobbyKing (a website with many remote control items) and there were heaps of cheap options. I started looking at the frames. If I was going to have a copter, I wanted it to look good. The next problem was figuring out which models worked with what, how the ratings of motors worked, the size of the blades, the frame, the bla bla bla bla. I nearly gave up – again.

Instead, I started looking at kits that where ready to be built. This was more up my alley. The hard work was done, and I just had to put it together… As Jeremy Clarkson puts it “How hard could it be?” – yeah right…

I chose a Hexacopter from 3DRobotics with the full electronic kit. This saved me having to know what an ESC was, and what kind of rating a motor had. (I still don’t know what the specific motors are that they sent me. I just know they are blue and go really fast.)

The reason I chose to go with the OpenSource system, was community support There was software available, new firmware updates, it looked really good. I’d chosen the ArduPilot box and after searching on the DIYDrones website, I finally found what I was looking for. The final piece in the puzzle was all about batteries.

Do you remember when Linux first came out? I remember compiling kernels many years ago, and people saying, “Yeah, this is the future”. The future? Yeah…Whatever. Make it friendly and don’t make it crash on me. These days, it is much more stable and there are more than a few consumers using it.

This was where I found myself in the copter world; scratching my head and trying to figure out a bunch of information that everyone knew, or just assumed that was already known. This was probably one of the hardest things to understand. That and trolling through the massive amounts of forums posts. There was plenty of good help available however. My questions: Post 1. Post 2. Post 3

Now back to the batteries… If you are looking at buying a DIY drone, there are 2 things you aren’t told. Firstly, about a transmitter/receiver (and a charger) and secondly, what type of battery you will need.

The 3DR Hexacopter will easily handle/need a 3C 2200mAh 11.1V. What is all this? 3C means it has 3 cells. 3 parts of a battery that make up the 11.1 volts required. The 2200mAh value is how much power is in the battery for how long it will run. There is another value and that is how much punch it has, but a value of 30 will work fine. All up, a battery like this, you will get 7-8 minutes from it. (Yep, that’s all unfortunately). This is what they look like and the approximate price.

I’d like to say 2 things about when ordering parts from the Internet. My intention was to have a flying copter and be able to be proficient at flying so I can take aerial video. I made sure I ordered months in advance. The guys at 3DRobitics in the USA, I can not fault. I ordered on a Thursday/Friday night Australian time, and it arrived on the Tuesday. I also made an order from HobbyKing at the same time. I ordered batteries and a radio remote controller and receiver from them. I still haven’t received the package and it’s still sitting in Hong Kong (apparently) – and this was back in mid May, 2013. Now to be fair to them, it could be the mail service they use – SpeedPost.sg. Correct me if I’m wrong, and maybe my expectations are too high, but I would expect that when they say a package will be delivered within 3-6 days, that it will be.

You get what you pay for. If you want items, get them local or from trusted suppliers.

Needless to say, I discovered a nice little RC hobby shop up the road from me. They don’t specifically have much tri/quad/hex copter gear, however there is plenty of other equipment. They have batteries, chargers, transmitters and basically what I needed. I should have gone there in the first place. I’m a fan of supporting small businesses, especially specialty shops like this. Needless to say, the friendly staff are very helpful.
http://www.mildtowildrc.com.au/

Part 2 of the building phase will come next.

Thanks! Let me know if this article has helped you in anyway.