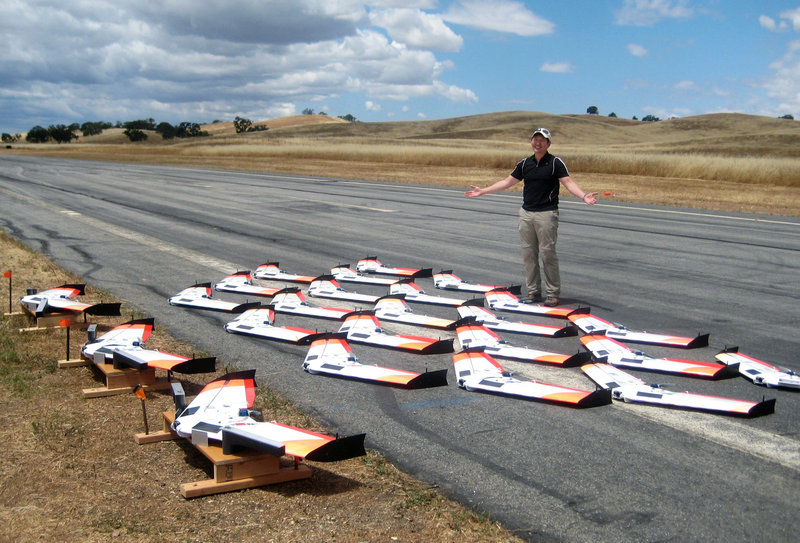 Congrats to Timothy Chung, Michael Day and Michael Clements at the Naval Postgraduate School, whose work on APM-based swarming has now reached 30 aircraft in the air. News here and great coverage from NPR:

At a restricted airfield at a quiet National Guard base in central California, researchers from the Naval Postgraduate School have loaded a drone they call a flying wing onto what looks like a giant sling shot.

The drone soars up into the air and settles into a racetrack pattern. It's up so high it's hard to see, but the sound is inescapable — like a buzzing bee. With the launch of several more, the buzz grows louder as they all settle into that racetrack pattern.

The aim is to get 24 drones into a swarm and have it behave like one.

"In our context, swarming means a large collection of aerial robots working together to do something meaningful or interesting," says Timothy Chung, who is heading up this project for the Naval Postgraduate School. "The one behavior that we're testing out today is a leader follower behavior where the aircraft talks amongst themselves."

The drones talk to each other over WiFi. Once up in the air, they are programmed to determine who the leader is and the other drones follow 50 meters behind.

"And so those types of algorithms make it a lot smarter, more intelligent than what we typically think of as just drones," says Chung.

It's why he prefers to call them unmanned aerial vehicles or UAVs. Although a pilot is on standby to take over if needed, the UAVs are autonomous: The last moment of direct human contact with these UAVs is the launch.

The point of today's experiment is to get as many UAVs swarming as possible and do it cheaply. Each costs about $1,000. The idea is to go for the expendable rather than the exquisite.

"There are some tasks where you are going to want something small cheap and maybe even disposable," says P.W. Singer, a strategist at the New America Foundation, a think thank in Washington, D.C.

For example, out at sea, where he says a swarm could spread out and be in more places at once, searching for an enemy fleet, perhaps.

"Or maybe it's not just about finding the enemy but doing something about it," says Singer. "With swarming you can surround an enemy, target and overwhelm its defenses, so that even if they were able to shoot down 90 percent, that last 10 percent can still cause damage or even sink you."

There could be civilian uses too. Swarms could monitor large agricultural fields or help add eyes in the sky to a search and rescue operations.

But the technology still faces challenges.

Some are political, such as following air traffic rules and concerns about privacy. And some issues are technical, such as withstanding high winds, or having enough power to stay in the air for long periods of time.

Chung is one of several researchers across the country working on swarm technology because the military has identified it as a priority.

At the end of this experiment the drones land, one by one.

"Our intent is to keep pushing. To be able to have these technologies mature enough to be able to deploy up to 50 in the near future," Chung says.

He believes his team holds the world record for the largest swarm. After getting 20 in the air back in May, they tried again just last week and got 30.