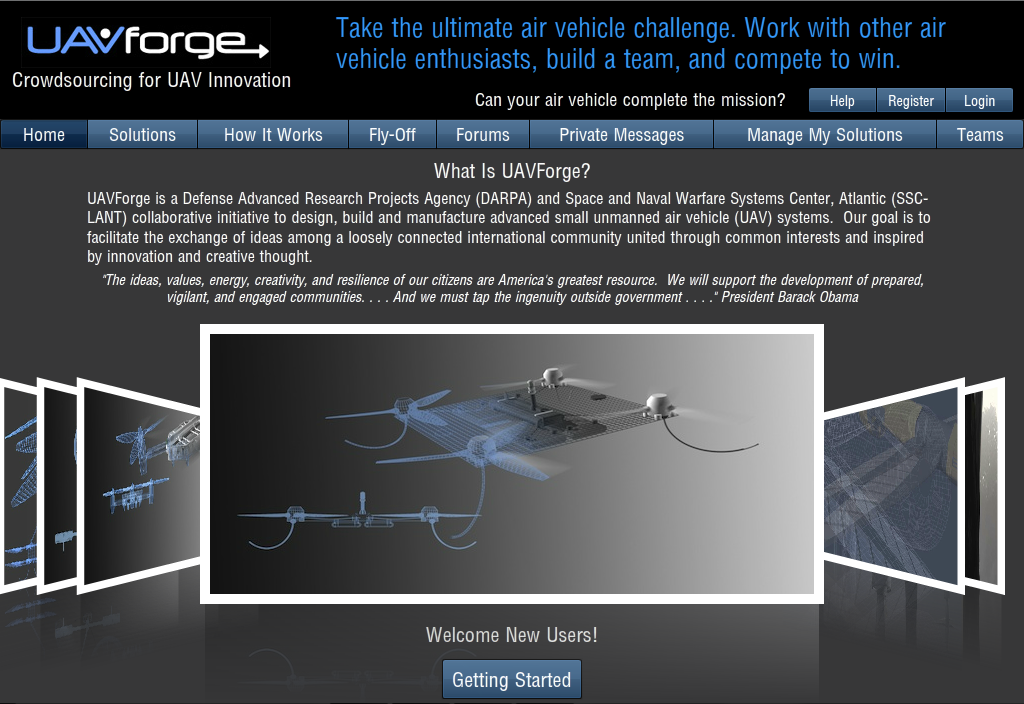 Holy crap. DARPA has just announced a project to use the DIY Drones model for the future of military UAVs. Called UAVForge, which is already up and running (although it crashes Firefox on my machine), it is described in the official request for proposals like this:

This initiative aims to produce a small, affordable, and easy to operate unmanned air vehicle capable of persistent perch and stare surveillance. The successful offeror will empower a diverse community of innovators and emergent design teams by providing manufacturing capabilities and assessments and producing up to 15 units of the winning design. The UAVForge initiative will employ a collaboration website and a fly-off competition, both developed and administered for DARPA/TTO by the Space and Naval Warfare Systems Center, Atlantic (SSC Atlantic), Charleston, SC.

Many more details are in the full pdf description here. It's a $2 million project, with $100,000 going to the winning designer.

Small unmanned aerial vehicles (UAV) have proven important in modern military operations and
show promise for civil applications. Portable UAVs are used by the military for reconnaissance
missions and have been used commercially for tasks such as monitoring oil and gas pipelines,
and tracking wildfires. However, the effective use of state-of-the-art systems is constrained by
cost and performance as well as high logistic support and operator skill and workload demands,
compared to more routinely employed portable military equipment, like GPS and night vision
devices.

The UAVForge initiative will use a collaboration/competition crowdsource approach to produce
a small, affordable, and easy to operate UAV capable of persistent perch and stare surveillance.
Novel manufacturing concepts and resources will empower a diverse community of innovators
and emergent teams to deliver a superior UAV system solution relative to state-of-the-art
systems. The overall objective of UAVForge is to develop an aircraft that costs $10,000 or less
per unit, can be carried in a rucksack by an individual, can fly to and perch in useful locations at
several kilometers range for periods of several hours, and provide continuous, real-time
surveillance without dedicated or specialized operators.

In this solicitation, DARPA is seeking innovative manufacturing services to facilitate the
UAVForge initiative. The selected manufacturer will support collaboration and produce the
winning design from the UAVForge competition.

UAVForge is a DARPA/TTO initiative supported by the Space and Naval Warfare Systems
Center, Atlantic (SSC Atlantic), Charleston, South Carolina, to leverage the unique potential of
crowdsourcing. SSC Atlantic will develop and maintain the www.UAVForge.net website, which
provides participants with the virtual environment and tools necessary to organize and
collaborate independent of geographic location, education, profession, or experience. The virtual
environment features collaboration tools including shared and private information spaces,
message boards, mailing lists, and other features that enable effective collaboration.

Collaboration will focus on an objective list of small UAV capabilities (Appendix 1). A series of
multimedia-based milestones (Appendix 2) will encourage the formation of ad-hoc teams around
promising solutions. These teams will develop functional design prototypes. DARPA will select,
based on published criteria and crowd/manufacturer input, the top ten designs to participate in a
fly-off competition hosted by SSC Atlantic (Appendix 3). DARPA will select one winning
design based on the results of the competition and crowd/manufacturer input. The winning team
will receive a $100,000 prize and an invitation to participate in an exclusive overseas military
demonstration exercise.

The selected manufacturer from this solicitation will provide the winning team with a subcontract to produce an initial lot of up to 15 UAVs for government experimentation. The selected manufacturer will play an integral role in the evolution and execution of the UAVForge initiative. For planning purposes, award of the manufacturing services contract will occur four months after the start of UAVForge collaboration and four months before the fly-off competition.