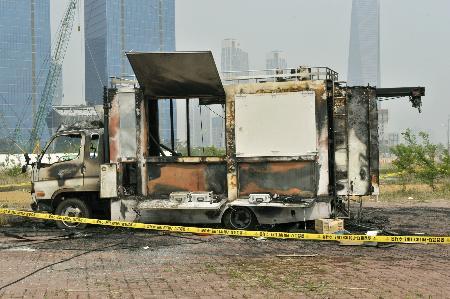 The sad truth is the GPS system is a fragile one, easily blocked and interfered with, as the tragic fatal crash of a drone in South Korea last month (shown above) showed.

Now DARPA is sponsoring new research to help drones navigate without GPS. Called "All Source Positioning and Navigation (ASPN),” it’s trying to “enable low-cost, robust and seamless navigation solutions … with or without GPS.”

Right now, the agency notes, the military’s navigation systems primarily rely on a pairing of two devices: GPS, which uses satellite data, and what’s known as an Inertial Navigation System (INS), which relies on “dead reckoning” (using estimates of speed and direction, without external references) to provide locational intel.

It’s a tactic that’s accompanied by several problems. For one, INS — because it uses internal, ongoing estimates — is notoriously error-prone without a GPS system to back it up, so it can’t be relied upon exclusively. And INS systems often obtain their starting position and velocity from a GPS device. Which means if the GPS is under attack, the INS risks leading military personnel (or the drone or weapon they’re navigating) astray.

These navigational systems are also extremely inflexible. Typically, Darpa notes, they’re programmed to accommodate, maybe, one additional sensor (say, a magnetometer) and unable to plug into any others. As a result, personnel can’t respond to “new threats or mission challenges” in real time. Not to mention that, even as consumer navigation tech becomes more sophisticated (Apple Maps, anyone?) the military can’t take advantage of the most cutting-edge products.

Of course, there are already plenty of GPS alternatives available. Radio beacons, which transmit signals from static locations to receiving devices, allow the calculation of location based on proximity to various beacons. Ground feature navigation extracts the positions of tracked objects and then uses them as points of reference to gauge a vessel’s locale. And stellar navigation systems use the coordinates of celestial bodies to assist in a vehicle’s navigation.

Darpa’s dream navigational system would go beyond those kinds of discreet systems — by incorporating pretty much all of them. The ASPN system, according to Darpa’s announcement, should be able to accomodate any available sensor, and be versatile enough to incorporate new sensors “as they become available in the marketplace.” The key benefit to such adaptability would be the mitigation of GPS-dependency. Personnel would instead have myriad sensors at their disposal, and be able to toggle between them as necessary. In other words, a suite of backup tools to work, in conjunction, as a safety net in case of GPS failure. Among the ton of gadgets that Darpa wants the system to utilize: 3-D imagers, LiDAR, temperature sensors … and good old compasses.