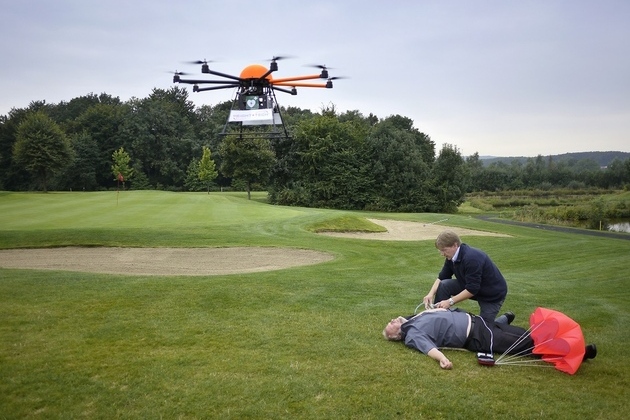 From The Verge (with suitable skepticism)

German non-profit group Definetz wants to make defibrillators readily available across its country so that any time someone has a heart attack, the life saving devices are within arms reach. And it's looking to drones to help it bring its vision to fruition. On Friday, the group announced the Defikopter, a concept device it designed with drone-maker Height Tech to fly defibrillators to emergency responders or the public by way of a GPS-enabled smartphone app.

Definetz says the Defikopter, which was developed over the last three months, can travel within a radius of 10 kilometers (about six miles), and fly at a speed of 70 kilometers per hour (about 43 miles per hour). While Definetz and Height Tech have announced their collaborative design, neither organization said if or when the Defikopter would be made available for sale, or when and if the corresponding smartphone app would be released to the public.

There are, of course, a few drawbacks to the drone concept. If built, the drone hardware would sell for about $26,000, according to the Mittelbayerische news site. Additionally, if the Defikopter and its app are made available, the Defikopter can only be hailed by someone who is with a heart attack victim and already has the app downloaded downloaded on their phone. The drone also can't run without supervision — the Die Glocke newspaper reports that German law requires that unmanned flying vehicles can only be flown if monitored by a human being. These limitations and restrictions could mean the Defikopter concept never makes it off the ground.