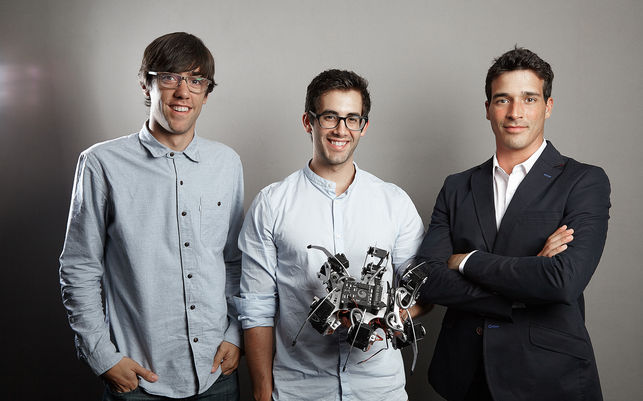 This is a story about how two young brothers of 24 and 21 years old turned a small venture that had nothing more than 3000 € (about 3300 USD) into a multi-million Euro robotics company. The lessons learned in the Erle Robotics journey

Taking off for the first time is tough, always

Erle started in 2012 as a project (ProjectErle Robot) that aimed to create tools for developers in the robotics area motivated by our previous experiences (and struggles). Hardware and software that helped roboticists test and do their work without having to reinvent the wheel every single time they created a new robot — which is pretty much what has happened in robotics over and over. Refer to this article if you’re interested in reading more about the topic.

David and I started with barely 3000 € borrowed from our father, Patxi. At the time, we had no office so we refurbished a room in our father’s house and started it out there. Not many knew what we were up to and the ones that did, didn’t seem to put much interest on it. We were indeed doing something out of the ordinary but more than that, we started noticing that

failure in southern-european countries is unacceptable. The fear of failing kept many away from us from the very beginning.

Still, we’ve always been a pair with that grit factor on us so motivated by the growing popularity of the so called drones, we decided to start focusing in aerial robots and slowly designed, prototyped, assembled and tested ourselves the first concepts that later would become the brains for thousands of robots and drones out there. Starting something for the first time is definitely difficult. You probably won’t get it right the first time but if you have right attitude, every misstep will strengthen your vision and ultimately, yourself.

After a couple of prototypes that burned our few resources we had the first results. We managed to put together a Linux-based single board base platform for building a wide variety of different robots. It felt great and we could sense that there was potential for doing business with that.

It was time to look for an investment!

Unfortunately, many private investors closed their doors to us. Apps were popular at the time. Everyone thought that Android and iOS were all you had to know in the startup environment. Bootstrapping and getting a minimum viable product over the weekend was common but we were trying to create hardware. Robots. We needed cash.

Robotics startups are totally different beasts from software startups and they need cash from the very beginning.

While many investors kept considering our venture too risky, we were lucky enough to get supported by the Basque Government through BIC Araba (previously known as CEIA) and their Ekintzaile program. A grant that helped us iterate and reach a certain maturity point that led us to finally convince the first business angels.

The team is the king

With the first funds available, it was time to grow our team. We hired our father as the finance guy in the company — a person we could trust while being focused in the technical development and commercialization of the technology. We also hired Alex, Iñigo and Irati as our first engineers. Incredibly talented people that helped realize our vision step by step and motivate newcomers. We slowly kept incorporating new members. Lander, Asier and several others followed.

Starting such an adventure required people we could trust so we hired carefully but mistakes were also part of the path. If there’s something we learnt out of these years of work is that

in a startup one needs to be prepared to hire but also to fire.

Stay away from individuals that look solely for their self-benefit and growth while getting away from the company’s core values. These last years taught us that understanding your team is as relevant as having a clear vision of what’s ahead in the business landscape. The team is the king and those that fail at accepting that, don’t fit.

The secret sauce … a.k.a. the hidden founders

Many startup stories talk solely about the founders: their inspiring vision, their leadership, their hiccups, … and while much of this remains true for a great majority of success cases, there’s something as relevant that rarely gets mentioned.

This secret sauce is present in every single startup in the world. I call this sauce the “hidden founders”.

We had two ingredients in our recipe, each one of them as relevant as the founders:

As it’s already been reported in several places, Erle Robotics has officially been acquired by Acutronic Robotics, called to become a leading robotics firm focused on the next-generation robotic solutions.

The new company will have three business lines: it will be responsible for the development and commercial activities related to H-ROS; robot and drone hardware products will continue to be sold under the Erle brand and engineering services will be offered to corporate and government clients.

One thing that entrepreneurs often forget is that being focused is as relevant as knowing when to celebrate. I strongly believe we’ve failed at this. Our focus has been constant and I don’t remember the last time we celebrated something as a group. Bülent Atlan a great technologist and an even better advisor once shared a few of his lessons with me. I couldn’t agree more with:

If you work hard, party hard.

No kidding, in fact we’ve got more than two but we just use the first two. Let me take my brother’s name as an example. His full name is David Mayoral Vilches. Now, let me analyze his name:

I know this is silly but I’m sick of this. Specially given the fact that Spain has one of the oldest and most influential cultures in the world. So either because you’d like to be knowledgeable from a cultural perspective or just because you want to be respectful, keep in mind that:

it’s not common nowadays for spaniards to have a middle name and likely, that thing after his first name is his last name.

Getting called “Mr. Vilches” feels weird (the right form should be “Mr. Mayoral” although “Mr. Mayoral Vilches” would be a total milestone).

Erle Robotics has nowadays been acquired by a multinational and our team has been placed at the center of a new robotics division that will bring many of our ideas to industry. We’re extremely excited about this chance to push our vision around hardware for robots further (summarized in H-ROS) and contribute towards a future where interacting with robots is not restricted to a few individuals with high technical (and mathematical) skills but to a great majority of the users out there.

We’ve been extremely lucky over the last years to hire more experienced and talented profiles like Carlos Uraga Pastor (who took over the CEO position in Erle). Carlos helped us reach the maturity we needed with an extremely committed attitude and a skillset similar to that of many founders. Carlos and everyone else will remain with us in future adventures and we are all extremely excited about leading the changes of what’s coming next in robotics since we truly believe that:

I’d like to take this chance to thank those individuals and organizations who supported us during this period, particularly thanks to my family (that’s you mom!), my girlfriend Keila, BIC Araba (previously known as CEIA) for their support, IE Business School for an amazing training, TechFounders program for helping maturing our ideas and connecting us with the right networks and the overall ecosystem of the Basque Country and Spain for their constant support and aid.

Special thanks to our team at Erle Robotics. The best prize has been having the chance to work with you. We couldn’t ask for a better group.