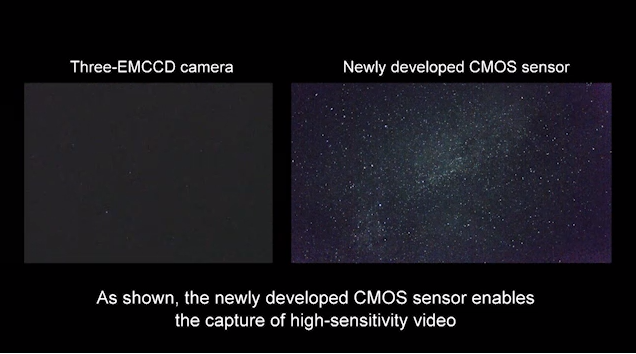 Unfortunately I'm unable to embed video, so you have to click on the image to go to the Canon website.

The newly developed CMOS sensor features pixels measuring 19 microns square in size, which is more than 7.5-times the surface area of the pixels on the CMOS sensor incorporated in Canon's top-of-the-line EOS-1D X and other digital SLR cameras. In addition, the sensor's pixels and readout circuitry employ new technologies that reduce noise, which tends to increase as pixel size increases. Thanks to these technologies, the sensor facilitates the shooting of clearly visible video images even in dimly lit environments with as little as 0.03 lux of illumination, or approximately the brightness of a crescent moon—a level of brightness in which it is difficult for the naked eye to perceive objects. When recording video of astral bodies, while an electron-multiplying CCD,*2 which realizes approximately the same level of perception as the naked eye, can capture magnitude-6 stars, Canon's newly developed CMOS sensor is capable of recording faint stars with a magnitude of 8.5 and above.*3

You can watch video demonstration and more detail on Canon Website