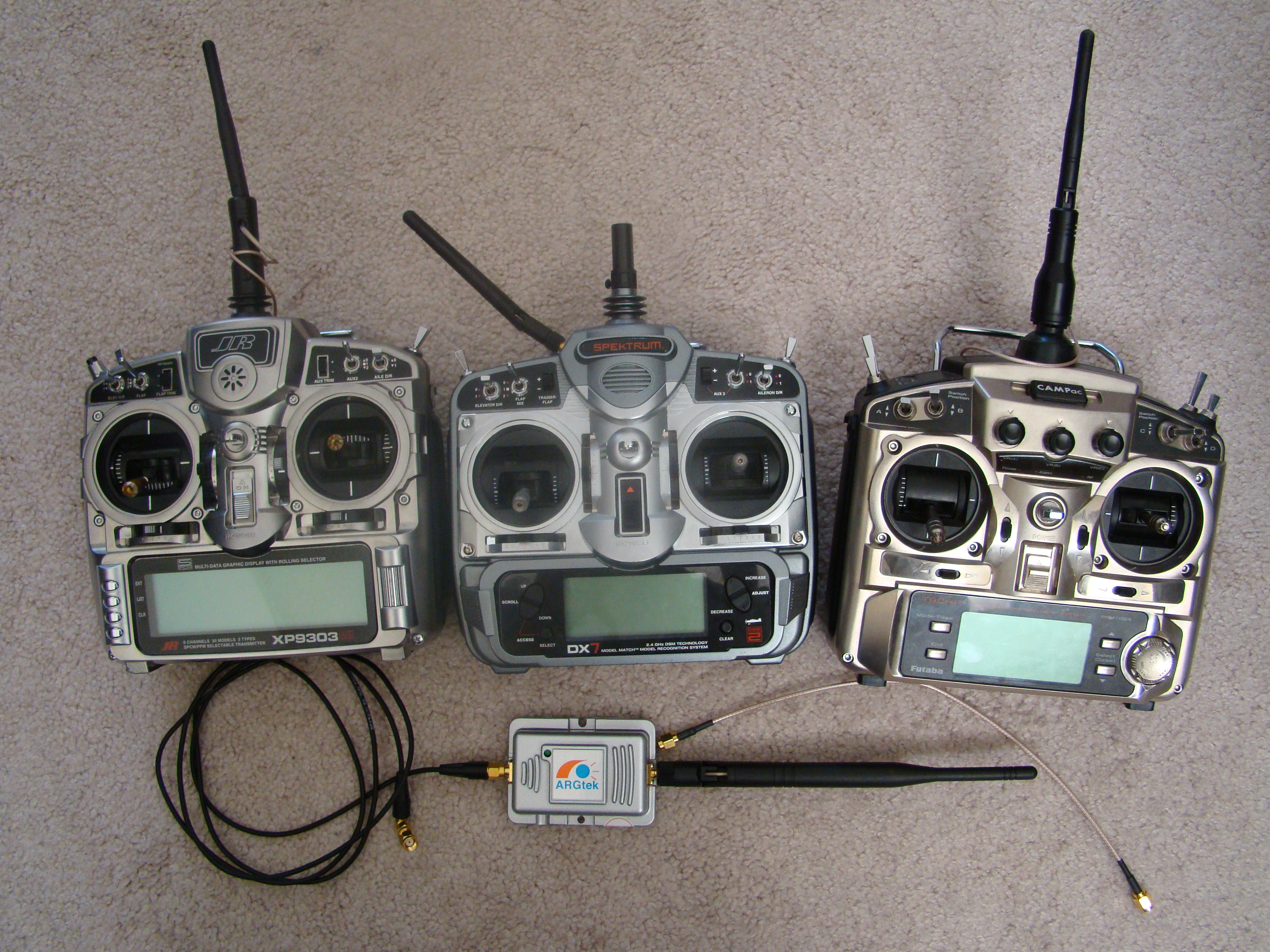 I love my Spektrum Dx7 and my 2.4Ghz JR XPS9303 and i refused to trade its solid rock performance by a 72mhz radio just to increase range of my FPV/UAV. So in collaboration with my friend JB we find out the cheapest and secure way to amplify the signal, it even works in some Futabas and virtually with any 2.4Ghz radio, but some modifications are required. Lets see some options:-Spektrum Dx7 this is the cheapest solution for a very reliable 2.4Ghz radio, i used it for about a year and i never had any signal glitch (unless i fly beyond 2000 feet). The problem with this one is that you have to modify it, you need a SMD to U.FL adapter, drill a hole in the side of your radio and just connect and screw the adapter, no soldering required. If you have more than 5 hours of experience with Legos your qualified to do this job. Then you just need to connect the booster. The one in the picture (middle) is already modified.-If you have the awesome JR radio but is 72Mhz you can buy the Spektrum 2.4Ghz module and just insert it in the back of your TX, personally this is my favorite setup. It's a good deal because includes a $99 dlls receiver for free! Note that JR TX alone cost around $600 dlls, but you can get it for less, i got mine for 300 bucks with Spektrum Module included on R/C Groups =P. Remember you are looking for the JR XPS9303.If you have one of the fallowing Futaba radios:7U Series Radios8U Series Radios8J Series Radios9C Series Radios9Z Series RadiosFN Series RadiosYou can just go and buy the Spektrum 2.4Ghz module, easy and with no hassles. It's also a good deal because includes a $99 dlls receiver for free! One of the advantages of the Spektrum receivers is the build in diversity system, you can even buy one with 4 satellites like this one, or buy a super tiny, tiny setup like this one, or the traditional one.The diversity is crucial to have a reliable link when you are flying far away, also Spektrum has a receiver for Carbon Fiber airplanes (Carbon Fiber blocks RF signals).The idea is to have the best reliable hardware with an SMA connector and the SMA extension cable, after that you are ready for the final step: Get an amplifier. But we are talking about a few hundred dollars here, if you get the weakest one of 100mW it will cost you around $150 dlls. This is not pocket friendly in my point of view. So again our Asians friends come to the rescue, after making some research around the net I've found on eBay and a home Wireless Amplifier, so i decided to give it a chance and i bought it for 60 bucks including shipping! Wow that's a good deal! The one i got is this one.Note that the amplifier needs 6Volts to work, you can get a cheap 6V power regulator from here and just make the adapter. A 3 Cell LIPO is enough to supply it for a long time. 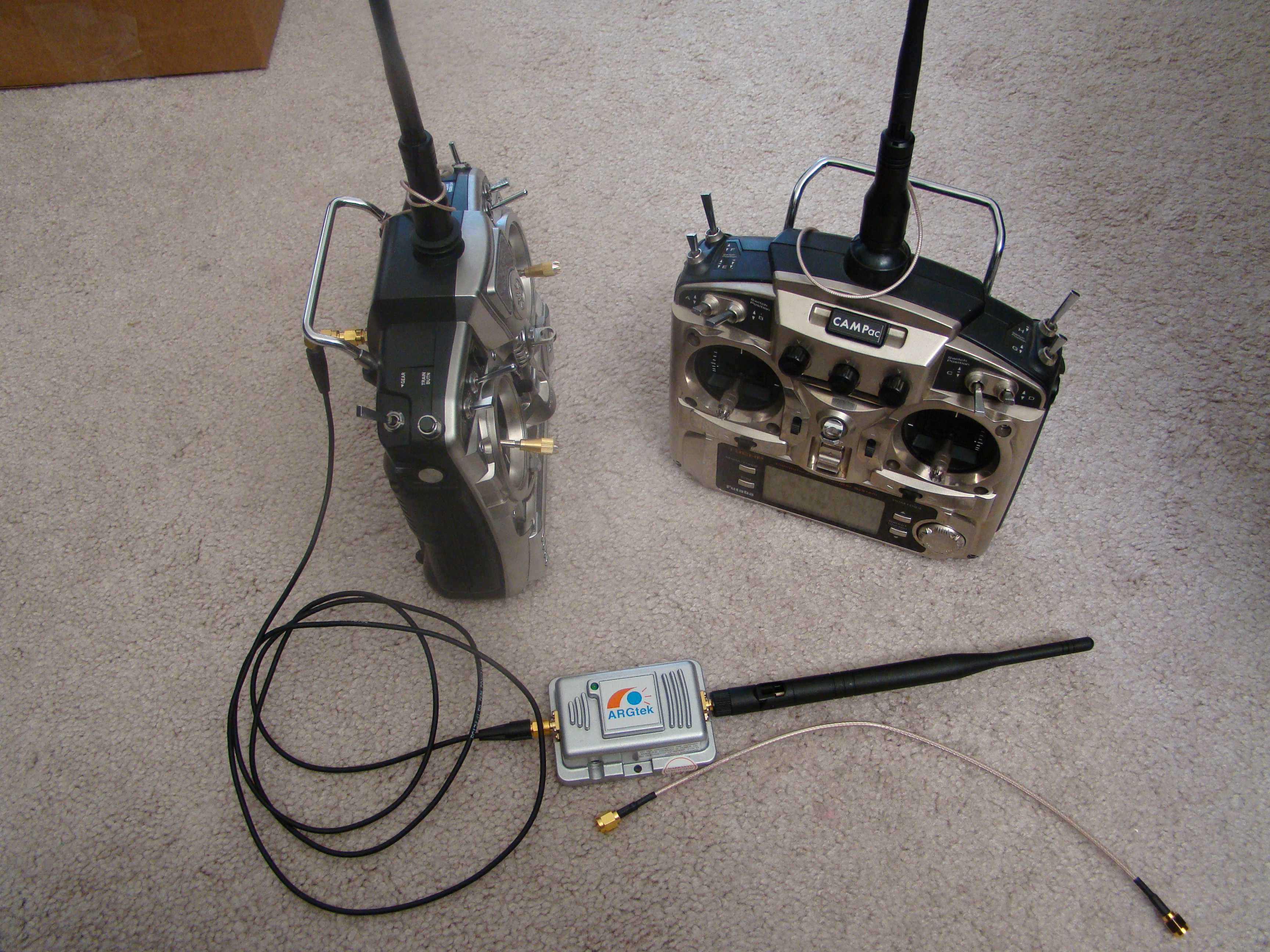 After receiving the AMP i did some tests, here are my results:Before using the amplifier, i was able to fly around 3000 feet away (~1 km) using a 900Mhz@500mW Video transmitter. I never lost the video signal, only the radio link...Using a 1.3Ghz@1Watt Video transmitter i was unable to fly more than 2000 feet away (~600meters). So the 1.3Ghz Video transmitter reduces my 2.4Ghz Spektrum range...Then i got my cheap Asian amplifier and using a 2.4Ghz Patch Antenna i was able to fly around 2.6 miles (4.18Km) away without a single glitch, but i was unable to continue because now my video was causing me problems, hehe!Not bad at all! Honestly i don't need more than 2 miles of coverage, is really a long way for an EasyStar. In conclusion the maximum range for my setup still unknown, but the range achieved is more that 2.6 miles and the +2 extra miles of coverage gained for less than $100 dlls is really a good deal for me! First Previous of 31 Next
This reply was deleted.