Congrats to you, the team, and Ardupilot!

They really needed help from an experienced builder. Here's my comment on the last update (here)

"Actually I feel sorry for these kids, they are a long way from the big leagues and I cant see how they will make it work without a good experienced team.  Chris got involved in this project a few weeks ago, helping them connecting the motors and stuff, but basically this is not helping them making this design airworthy.''

If I remember correctly they were using PX4 as the flight stack. You now have ArduPilot, what caused the change?

Basically they needed help, and I just repeated what I had already tried and had success with. Though it wasn't how I would have went about designing the aircraft, when I showed up a few weeks ago they were committed to it at that point. You can read more about how I contributed to the project here:

great stuff! If you post the logs I can have a look and see if I can offer some suggestions for tuning

Hey Tridge, couldn't have done it without your contributions! The logs are posted here:

I recruited some reinforcements to help with tuning on the last two days. Couldn't have done it without them either!

Comment by Rob_Lefebvre on December 3, 2016 at 7:54pm
Congrats Joe. The aircraft looks much better for sure. Glad to see Ardupilot working as I knew it would, as I've also done some consulting on a very large quad plane like this. It takes sophisticated control algorithm to fly an aircraft like this.

Does it need more power for full transition to forward flight?

And a good set of thumbs!  The pusher motor was certainly under powered, we couldn't keep the weight under 55lbs and get the CG right without switching to a smaller pusher motor. One of the drawbacks of this design is the large moment arm of the pusher motor which makes CG difficult and also makes pitch corrections in quad mode struggle because of the inertia.

Well done Joe. Glad it Arduplane got it flying in the end. ;-)

Have you tried forward motor assist and wind feathering yet? I think with a bird this size this will become crucial control methods in wind, due to the large wing area exposed to wind.

Also have you added some forward tilt on those hover motors? (we use about 7degrees) This will help hover attitude control, in particular when using forward assist, to stabilise it in wind as the wings at a pitch up AoA will produce some stabilising lift, rather than the typical negative lift produced by pitching forward in quad hover. (Which you need to move forwards without forward assist.)

If dialled in this should improve hover performance and increase your hover flight time in wind. To the point you need to be careful in high wind, as it will not want to descend if flown in wind just under wing stall speed. Note that typical tip stall are prevented by the attitude stabilisation of the hover motors and hignher AoA.

You probably already figured this out, but note that with a QP the pusher motor and prop can be configured only for cruise, as it is typically not required for static thrust at launch because the QP can maintain lift on takeoff. This means if you really need to, you should be able to get away with reducing the forward motor and prop size and going to a higher kV which might help get the CoG right. The motor/prop combo should be the right pitch for the cruise speed and should be limited to the amount of thrust required at cruise, ignoring launch. (this typically ends up being a smallish high pitch prop). Being able optimise thrust to cruise also significantly improves overall efficiency.

Keep us up to date how you go and we'd love to see some videos in flight.

A few setup things first. The logs show ARMING_CHECK=0, so it didn't do any pre-flight arming checks. I'd highly recommend setting ARMING_CHECK=1. It didn't cause a problem for this flight, but is worth fixing.

I also notice that it had no airspeed sensor enabled. While we do support flying quadplanes with no airspeed sensor, it would be a good idea to add one. I'm guessing you were trying to just keep things simple for the initial flights?

Vibration was generally OK with hover under 2G, but there were some periods during the transition where it got to about 6.5G, and even had a few clipping events (which means it was over 15.5G momentarily). Such a large range of vibration is unusual. Vibration was much worse during transition than hover. You didn't actually reach Q_ASSIST_SPEED for Q_TRANSITION_MS so the vertical lift motors never fully disengaged, which makes it a bit hard to tell if it is the forward motor that is causing the vibration or not.

The attitude and climb rate control were not too bad during hover. That is actually a bit surprising as the gains on the quad attitude controllers were really low for such a large aircraft. It was a bit sloppy, and I think you could push the P and I gains up a fair bit. Don't push the D up much though. In vertical flight it seems to be slightly tail heavy, but not enough to worry it (the pitch integrator got to about 5% nose down).

The yaw was a bit off in hover. It is tending to yaw right, and the yaw controller is having to waste a significant amount of power compensating. 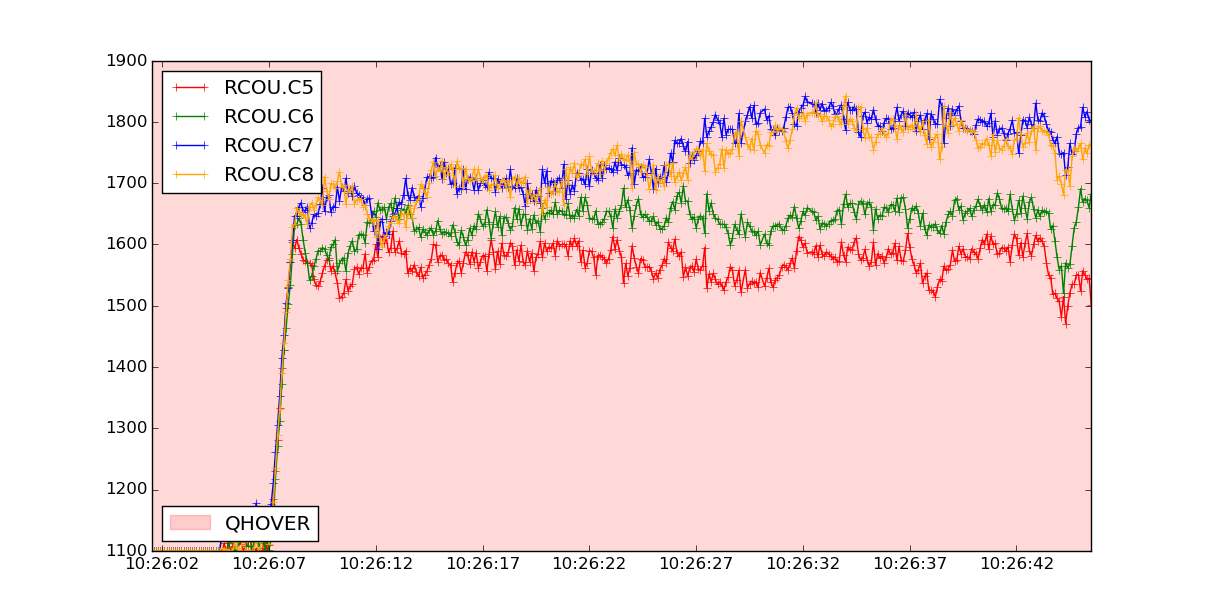 The easiest way to fix this would be to angle the right motors slightly forward (we had this in our quadplane and we put 1mm washers under just the rear of the motor mounts on one side to fix it). Ideally you'd get it so hover in zero wind puts the same output to all motors (or as close as you can get).

The forward motor was close to full throttle for 15 seconds but the aircraft only managed to make it to 14.5m/s, and that was with a bit of nose down. The Q_ASSIST_SPEED was 15, so it had to get past that speed for 5s before it will stop the vertical motors completely. Also are you sure 15 is high enough for a plane like this? I need 18m/s on my 2.7m quadplane (weight 15kg) to transition with a good safety margin. Your plane is a fair bit bigger so unless the wing loading is much lower I'd expect it to have a higher stall speed. You want your transition speed a significant margin above stall speed (say 3m/s or more above stall speed). 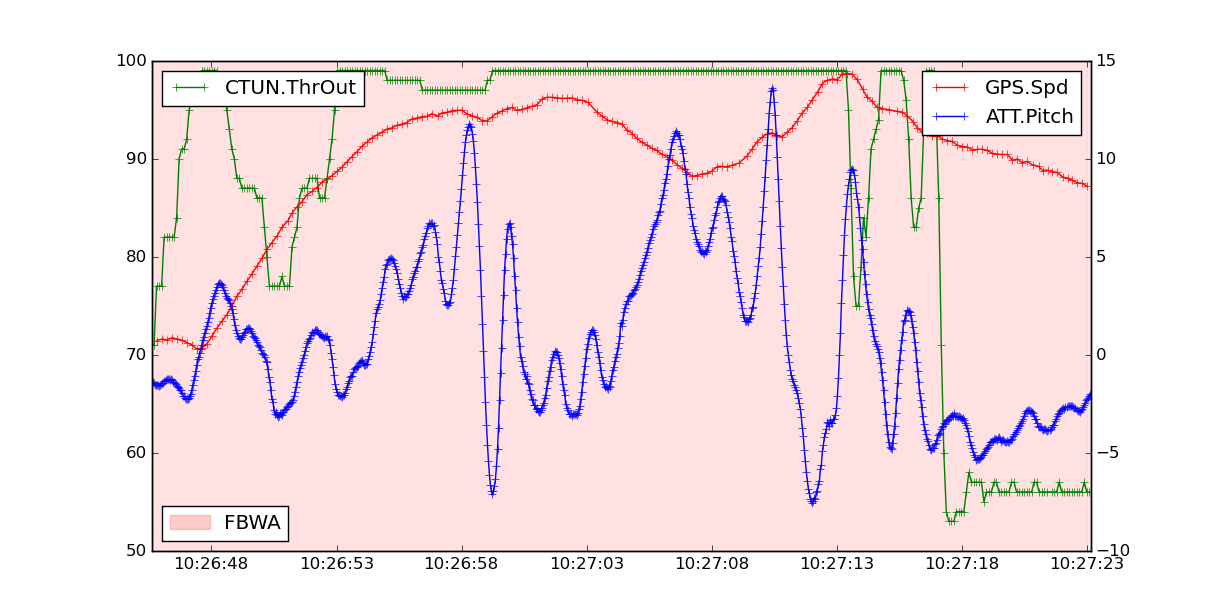 My guess is the VTOL motors are causing too much drag while they are spinning for the forward motor to get the aircraft up to speed. That is a common problem in quadplanes, and can mean you need a more powerful forward motor than you might otherwise need. I notice in your reply to Rob that you said you needed to reduce the size of the fwd motor to get the CoG right. I think you'll need to find some way to solve that. Maybe even angling the VTOL motors fwd a few degrees will help? Then at least you won't be fighting them quite so much on transition.

The second big problem is pitch control during transition. 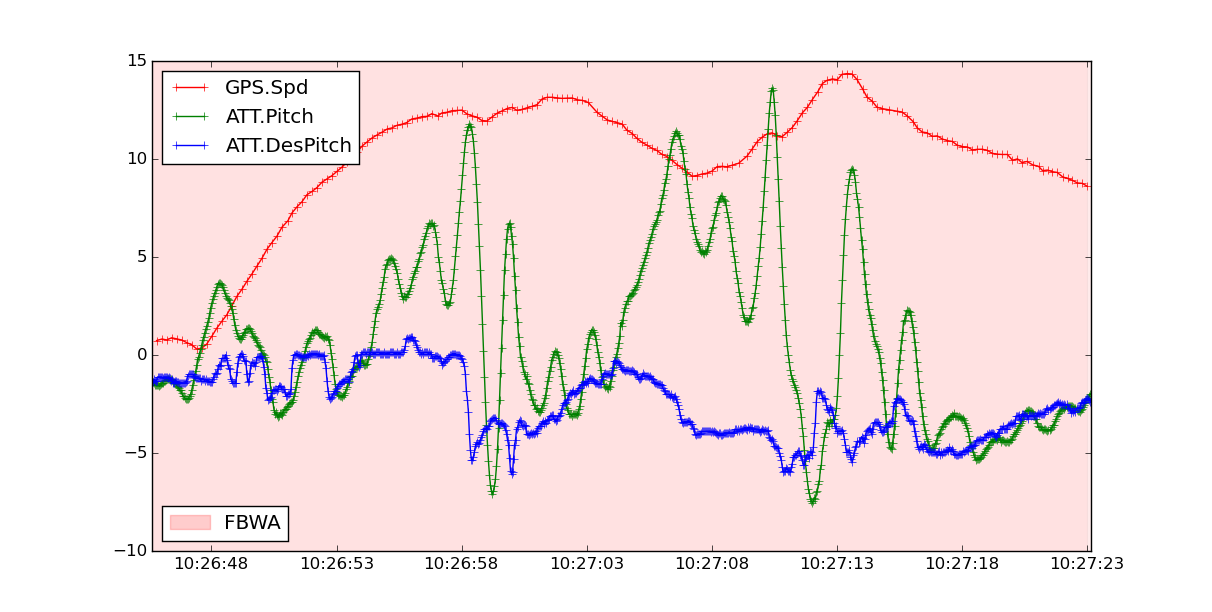 that is pretty bad, with pitch going all over the place. Let's look at what the fixed wing pitch PID controller is doing: 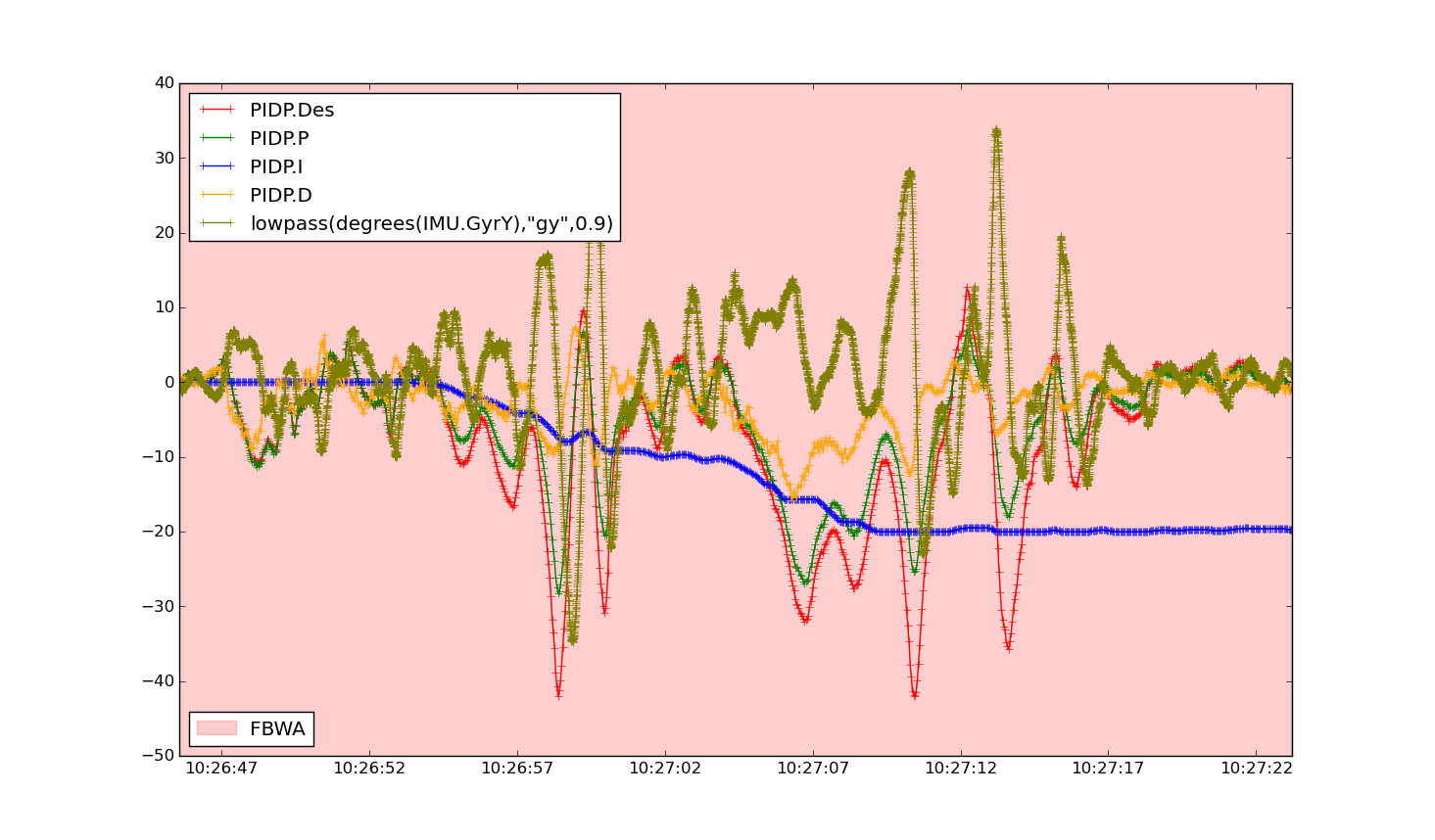 First off, you can see its building up a fair bit of negative integrator. It saturates at the full 44% PTCH2SRV_IMAX, which is a lot of down elevator on the vtail. That means that either there is a significant up pitch moment from the vtol motors during transition or the CoG in fixed wing flight is too tail heavy. You won't really be able to tell which it is till you can complete a transition and get some clean flight time logged as a pure fixed wing.

Because the pitch is a fair way off (and too nose high) the VTOL motors are pulling backwards for a lot of the transition. That makes the job of the forward motor really had as it tries to overcome the VTOL motors.

There are some odd things going on with the VTOL motors during transition. The front left motor goes to zero during part of the transition: 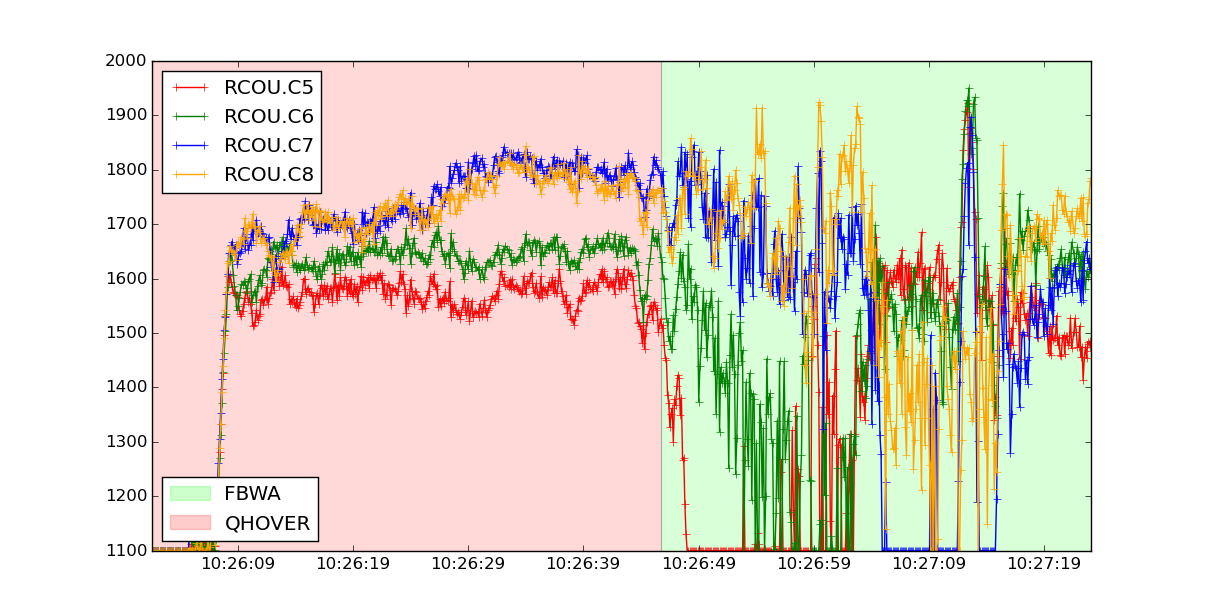 You also have a power problem of some sort.

those Vcc values are much too low. At one point it reaches 4.2V, which is getting towards dangerous levels. How are you powering the Pixhawk? Is there something drawing too much current off one of the peripheral ports? The voltage on the servo rail also varies much more than it should, especially in hover when the servos won't be under much load. It looks like voltage/current sensing on the main batteries isn't enabled?

I'm glad to see you got it flying and look forward to seeing some logs of it really stretching its legs in future posts!