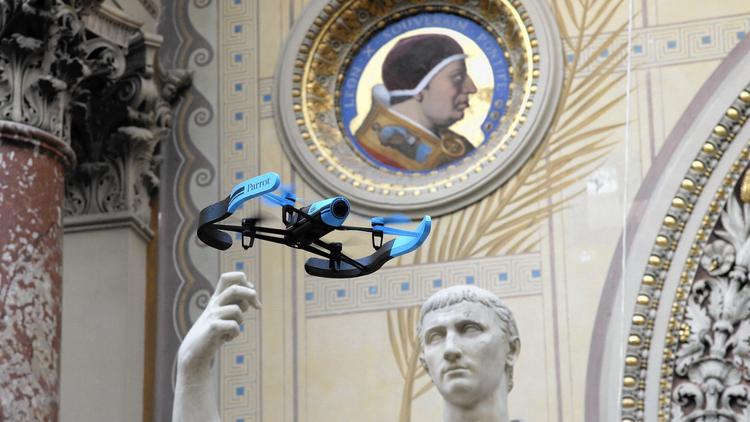 I don't normally pass along anti-drone op-eds, but this one from the Chicago Tribune is the most extreme I've seen and interesting in how it discounts the positive uses as trivial (pizza delivery) and focuses on the weapon risks.

In the overnight hours last week, authorities in Paris spotted unmanned drones buzzing the Eiffel Tower, the Bastille, the Place de la Concorde the U.S. Embassy and other high-profile landmarks.

Why? It's still a mystery.

I don't mean restrict the areas or altitudes where they can fly. I don't mean tighten regulations on the purposes to which private citizens and law enforcement can use them. Many jurisdictions have already instituted partial crackdowns.

I mean ban them outright. Prohibit their ownership and use for all but the most limited law-enforcement and military purposes. I mean pass legislation and create international norms to treat these small, unmanned flying vehicles the way the law treats machine guns and chemical weapons — as devices so inherently fraught with potential peril that whatever positive uses they may have aren't worth the risks they pose.

These nimble, remotely piloted aerial machines are a significant threat to public safety, even when flown by people who mean no harm, and an obvious threat to privacy.

Drone enthusiasts wax optimistically about what a boon they are or will be to photographers, retailers, farmers, bridge inspectors and so on — how cheap and easy drones make it to do important jobs.

I fret pessimistically about what a boon they are or will be to terrorists, criminals, goofballs, snoops and so on — how expensive and difficult it will be to create security barriers against their malign use.

An anecdote: In September 2013, members of the German Pirate Party flew a quadrocopter over the crowd at a campaign rally in Dresden as a gesture of protest, and crash-landed it more or less at the feet of German Chancellor Angela Merkeland her defense minister.

The device was basically harmless, but the incident — like the incident in January, when a lost drone crashed on the White House lawn — was ominous. What if it had been weaponized? A flying IED?

A drone capable of delivering a package to your door will also be capable of delivering a small bomb. And I know this sounds alarmist, but poke around online a bit, and you'll see that police departments all over are increasingly concerned about malicious uses of drones as well as the inevitable accidents when they malfunction or wander into protected airspace.

They can fly under the radar, literally and figuratively, and require sophisticated technology to safely disable. Commercial aircraft, power plants, outdoor gatherings and even moderately fortified private homes are vulnerable to stealthy incursions from above.

Drone defenders will argue that hobbyists have flown radio-controlled model airplanes for well more than 50 years without ghastly incident, so all this fretting and legislating is unwarranted.

If only. These things are no longer glorified toys. They're getting cheaper and more sophisticated all the time, and the costs of protecting ourselves from them will rise accordingly.

And for what? So pizzas and prescriptions can one day be delivered faster? So we can enjoy more stunning aerial videos such as the tour of Chicago in winter posted to the Soaring Badger Productions YouTube site? So we can more easily keep track of our crumbling infrastructure? So farmers can monitor their crops from the comfort of their dens?

The number of uses — real and on the drawing board — is growing along with the consumer and commercial constituency for drones. Which is why we should prohibit their manufacture and sale now, before we get a heavily financed National Drone Association funding lawmakers at every level of government and trumpeting the idea that it's a right, not a privilege, to keep and fly wee helicopters.

We'll be sorry if we don't strike an international treaty banning the civilian use of unmanned aerial vehicles and sharply limiting their use by law enforcement and the military.

Do I know how preposterous and reactionary this sounds? How it echoes of the vaporous panic with which history's fools have greeted nearly every technological advance from the printing press to the Internet?

Do I realize the futility of railing against the tide of progress with feverish hypotheticals?

I do. And I know there's a good chance that my yet-unborn grandchildren will one day find this column in a compendium of retrospectively amusing journalistic hysteria and have a good laugh at my expense over a drone-delivered takeout meal.

But do you realize, reader, that, whether we can stop them or not, the dangers of these devices are real and associated tragedies are inevitable? And that every once in awhile, the doomsayers have a point?