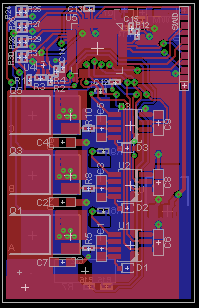 Greetings - I have been following this site for some time and I believe that it is time for me to stick my toe in the water.  I am an electrical engineer in my day job and I design the commercial, industrial, and military equivalent of ESC's for various applications.  I have designed the schematics, pbc's, and written the complete firmware (some from application notes, some from scratch) for a number of different applications ranging from 10W applications to 1kW applications (all relatively low-power) and have interfaced with customers using UART, CAN, and I2C.  Most of my experience is with the dsPIC33F series microcontroller.

Though I have adequate experience with the ESC design itself, I lack any real experience with RC or drones besides my own tinkering (I have a Twin Star 2 flying with APM 1 w/ Oilpan).  As a result, I really need feedback for hardware features before ordering any hardware so that I'm not stuck with a first revision that few can use without modification.

I see two potential markets, planes and copters.  The primary requirement of a plane is high-efficiency while the primary requirement of a copter is high current capacity, quick response, and weight.  Correct me if I'm wrong here.  My current interests (and, thus, my development time) lie with the high efficiency mindset.  Most of the hobbyists that I have seen on here equate long flight times with large capacity batteries.  Since the motor consumes a majority of the energy contained in the battery, even modest improvements in efficiency can have drastic effects on flight time.  It would be great if the same board could work well for both applications, so it might be smarter to design for a copter and just use different firmwares, much like ArduPlane and ArduCopter.

A question that many of you are surely asking yourselves is "why not just use ESC32?"  Some time ago, I saw the post regarding ESC32 and noted a couple of things that interested me about the project.  Unfortunately, only the software is open-source, so that gives us - the potential community - little incentive or ability to improve the hardware.  I also noted that the board was 4-layer, which - even if the source is published - most of us don't have a full version of Eagle PCB to edit 4 layers anyway.  ESC32 also has a lack of a couple of features that I really wasn't sure about.  I'm not knocking their design, I think it is great!  In fact, I saw their design and took inspiration from many of their features.  They really did a fantastic job!  The tiny physical size of the ESC32 really suits their project.  I just don't believe that the design is very accessible to the community at this time.

I have taken the liberty of creating a schematic and layout (not quite complete, just need to add I2C hardware).  I made some design decisions, but I am open to changing those if I can be convinced that the community needs them changed.

So, now the proposal, reasons behind some design decisions that I have made, and a request for input (hardware input is most valuable at this point since I'm not working on software just yet):

There is more, but I'm really trying to keep it hardware-centric at this point.  What I would really like is for some number of people express interest, we create a google group, share eagle files, and really get it going.  It would also be great if we could put some cash together for the first couple of part and board buys so that we aren't sending UPS and digikey wads of cash for 1 and 2 part orders.

Thank you for reading through this looong post.  I will keep an eye on this post and will be responding conversationally.  In about a week, I will re-post any results and - hopefully - we can create a community around this idea!