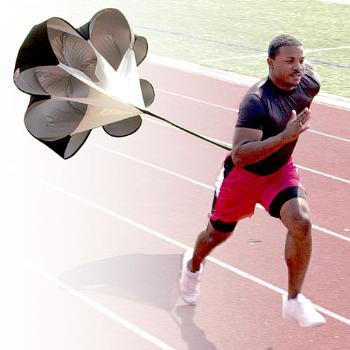 Maybe someone has encountered a small scale parachute ?

I'd like to add a safety parachute to the Arducopter !! help me decide....

As part of the project is to use an expensive DSLR on the copter,

My GF said i must have some kind of emergency parachute... after joking at it, i thought deeper -

Just imagine an emergency button that will immediately turn off all motors and shoot a parachute.

as parachute takes some time to open (=some free fall height), the benefits are sure and obvious for a 100m fall.

but if i'm around 5m above ground, (which can still be nasty to the DSLR) - would i have enough "falling time" to open the parachute and having enough braking force ?

think i better make one by myself ? is it rather simple as cutting and connecting wires to a cloth,

or it is more complex design that i could hardly achieve and i better get a ready one ?

i came across this as the only parachute i could find:

It looks sturdy and well balanced & stuff... it's totally affordable !

they say the 40" version has 7KG resistance. i'm safe on this side, i dont want a much bigger one.

how about the opening technique ?

i could stuff it in a small plastic tube attached to the top of the dome, using a small solenoid or servo to kick it out...

how do i ensure it opens reliably ? i guess it depends on the folding inside the storage tube...