In this blog I would like to share my experiences with my new project, an autonomous transducer boat, controlled by an Ardupilot. After a long time of reading blogs, searching parts online and planning, I started my project. My plans are to build an Ardupilot controlled boat, which measures and logs the depths and the temperature along its path on remote lakes to be able to create depths and temperature plots of the lake.

The idea for the boat developed in my head after my last fishing trip to Sweden. I visit friends in a small village in south Sweden at least twice a year and I relax from work by fishing on the remote and calm lakes at that site. In the summer time, I am very successful in fishing and it’s very easy to catch several big fishes within a few hours. Since the lakes are frozen in winter, my friends and I tried to do some ice fishing but we didn’t catch a single fish even though we spend at least 7 days on the ice. We guess that we didn’t catch at the right spots because we have no idea, where the deep parts of the lakes are, and how the lakes look like underwater. After that unsuccessful vacation, I decided to build that boat so I won’t have to drive back home without a single catch.

Thanks to the two great blogs from Geir Andersen and Harald Molle:

a lot of question regarding the sonar, the navigation and software were answered and my project could start. And these two blogs are the reason why I also share my experiences with you. Right now, I work far away from home so I can only progress with the project every few weekends. I started 6 weeks ago with the most expensive and important part, the sonar. It took a long time to investigate, which sonar I could use and which sonar could communicate with my Arduino and after I finally accepted, that there is no way around spending at least 200€ for a good sonar, I bought the Intelliducer from Garmin and the communication between the Arduino and the sonar worked instantly. The most important thing about the transducer is that it’s a digital transducer that sends the information in NMEA 0183 language. The transducer is quite small, easy to include in the Boat, the resolution seems to be 0,1m (correct me if I’m wrong) and the maximum depths is over 300m. It also measures the temperature, which can be interesting for fishing as well.

The next stage of the project was the boat. I wanted to build a light and easy to realise boat, that is totally enclosed and waterproof. I also wanted it to be energy efficient and not too slow, so that the batteries would last at least for 4 hours and more than 10 km. I decided to use a torpedo design, since I could use cheap plastic pipes as the body. I only had to build the front and the rear part of the boat with fibre glass.

I could manufacture the positive Form with wood on the wood turner of my father.

After I produced a negative form around it by using bandages, I rinsed them with wax as a separator, and I started with the fibre glass. Even though the material of the negative mold seemed not to be the best for fibre glass I was happy with the results.

As propeller, I decided to use a kort nozzle from Graupner with 60mm diameter. In small speeds, the kort nozzle is supposed to be more efficient, and it also saves my propeller from rocks or other dangerous objects under water. For my boat with a diameter of 125mm the 60mm diameter of the propeller seems to be huge. But as an engineering student, I learned that a big but slow propeller is more efficient than a tiny but fast running one at the same speed. That was my progress for that long weekend and I was forced to take a break till last weekend, where I came home again. 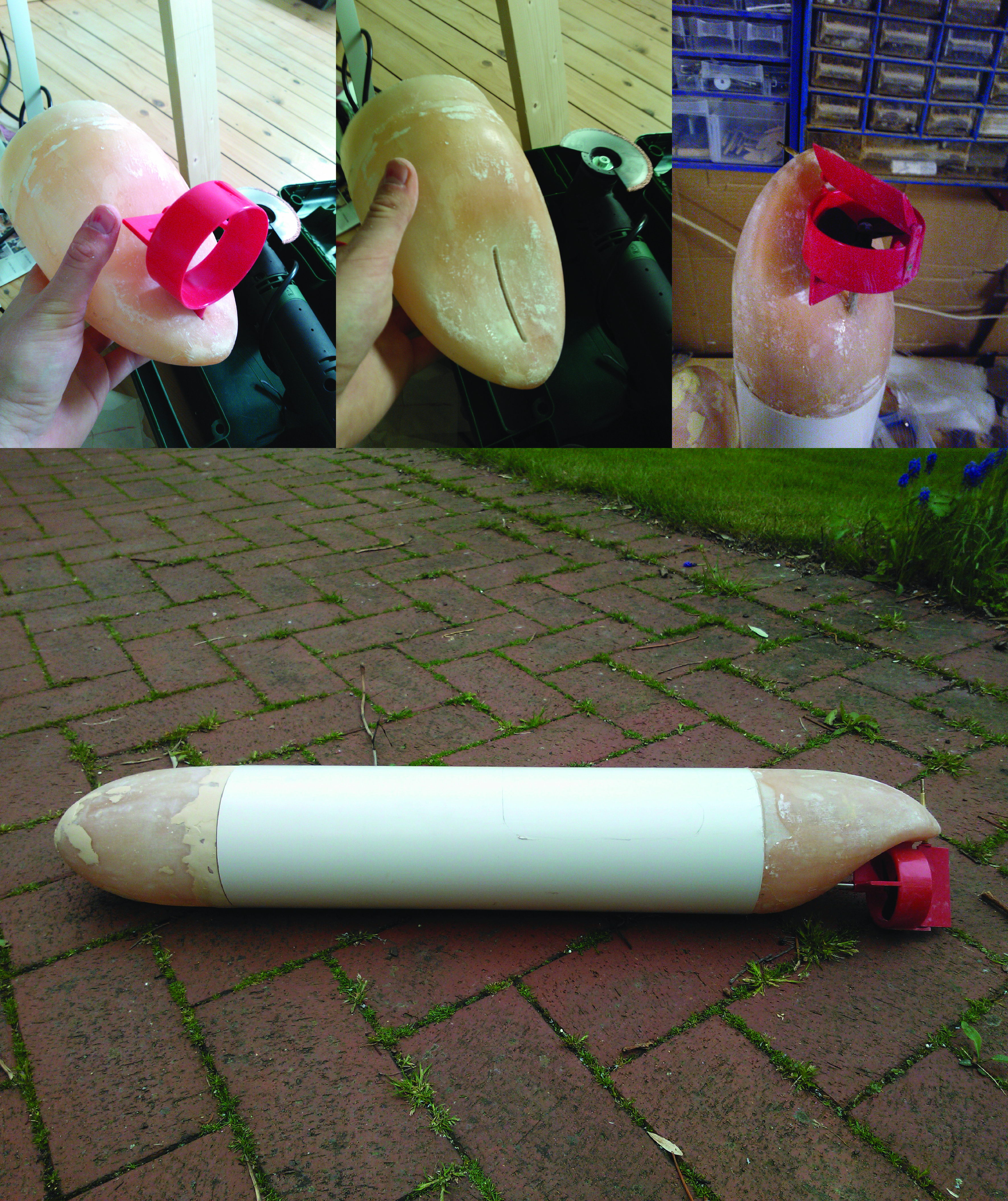