Mainly the difference will be regarding power consuming, or mechanical complexity. Some prefer Quadcopters for its simplicity to build and fix, others prefer TRICopter for its ability to YAW more aggressively.

In this acticle we will discuss deep differences between Quadcopters & Tricopters, and the point here is flying & stability equations difference between quadcopter and Tricopter. 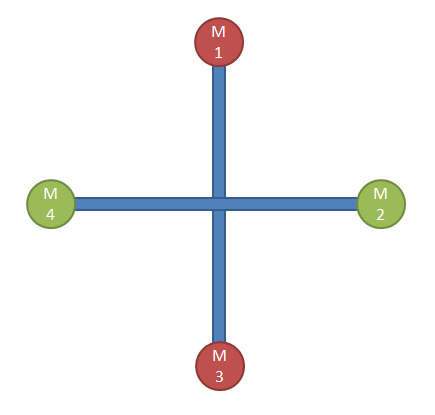 There are three core equation for Stabilizing & Flying quadcopter is:

so for example when you want to roll anti clockwise, you increase M2 thrust by x and decrease M4 thrust by x. so that Equation 2 is always Valid under the same Thrust Stick position.

So for a roll a typical equation is:

so what you add to a motor is substracted from the other one on the same bar. That is because we need to keep the third equation valid:

This is very important because this is HOW QUAD make and correct YAW. Quadcopters -hex & octa- correct YAW using moment difference between motors on different bars.

So when we want to Roll equations are:

What you can notice here from above equations is that no equation CONTRADICTION with the other two. Ideally of course, as in real world we make some assumptions:

1- thrust is linear with motor signal sent to ESC - which is false but works :) -.
2- motor response to signal change instantly, so we read the very last IMU signal and send correction. especially if we use P only no I or D, we read the only last value, which is not true as it may has nothing to do with the last change because of inertia of propeller, quadframe ...etc. but again it works :) The following equations are used:

This is OK as for Roll we add x for M2 & subtract same x from M1 and it will not affect the pitch stabilization -at least in theory-.

Now lets go to the equation of YAW:

to correct or make YAW motion, you need to change ceta of Motor 3 using the Servo. But wait This will affect equation #2.

changing ceta will not only correct the YAW but will corrupt the pitch balance in equation #2, and then thrust of M1, M2 & M3 needs to be corrected
again to correct the picth. but wait this will corrupt equation #3 because the YAW will be affected again and again in infinite loop :)

So if you correct YAW using Motor thrust angle, and correct Picth using M3 Thrust then equation #2 & #3 will affect each other, but the Tricopter will be balanced as a whole, because correction is so fast and accurate especially when using a digital servo.

THERE IS A BIG difference between Quadcopter & TriCopter in flying concept.

The main advantage I can find in Tricopter because of the Servo:

1- You can get more agressive YAW motion compared to Quadcopter, as Thrust is used for YAW not moment, and thus force for YAW control can be higher.

2- You do not need to care about CCW & CW props as long as motors & their props rotates in the right direction, the servo will correct any moment even if all motors are CW or CCW. does not matter.

Best of All is Tilt motors for Racer FPV:

in Quadcopter if you fly in X mode and made front motors tilted to gain speed while keeping the frame horizontal for better aerodynamic.

In this situation the Roll correction will YAW deviation because thrust vector is not vertical to frame and when one motor corrects the Roll by increasing thrust it will cause YAW motion because of thrust horizontal component.
Things will be worst if the same motor is used to correct YAW using moment in the opposite direction, then YAW will not be stabilized at all.

in Tricopter this will not happen, actually you can build a fast Tricopter with tilted motor, and just ignore this effect, because YAW correction happens by the third motor servo, and equations 2 & 3 already affect each other, and will actively stabilize.

Tags: quadcopter, tricopter, vs
E-mail me when people leave their comments –
Follow