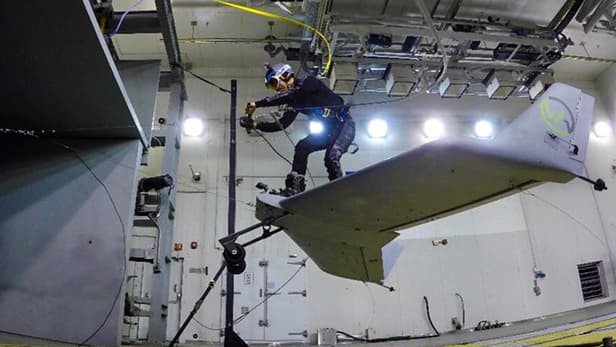 What started as a 1/6th scale model and an audacious (and ultimately doomed) Kickstarter campaign less than two years ago, has progressed to something people can actually strap into and ride. Well, not just any people. For its first foray into wind tunnel testing of its full-scale WingBoard, Wyp Aviation turned to Brandon Mikesell, a wingsuit-wearing maniac who spends his days leaping off mountains and gliding through majestic valleys.

Crafting the full-scale WingBoard prototype began with blue structural foam, which was then coated with layers of fiberglass and carbon fiber, incorporating plywood ribs to help distribute the loads. The prototype is broken down into five sections and assembled by joining each together with carbon fiber tubes. Flight control is handled by commercial and RC aircraft servos, with an autopilot function used to keep the wings level.

The testing took place over two days at the Ontario Institute of Technology's ACE (Automotive Centre of Excellence) wind tunnel, where the WingBoard was subjected to flight speeds of 55 to 75 mph (88 to 120 km/h). The testing was designed so that the WingBoard would feel the same forces as it if was being towed along by an aircraft, with a Y-shaped tow line harness connected to a point around 45 ft (13 m) inside the wind tunnel contraction.

The team evaluated the board's performance over four hours of flight and found that it behaved as hoped, with takeoff speed within 5 mph (8 km/h) of predictions and the drag forces within 10 lb ((4.53 kg). Most of the testing was carried out by Mikesell, but part of the exercise was also to get an idea of how easily beginners can learn to fly the WingBoard.

To this end, a member of the team with no skydiving but a little wakeboarding experience was ushered onto the WingBoard to gauge the learning curve. With guidance from Mikesell, the novice WingBoarder learnt to fly smoothly within 15 minutes of strapping in, noting the easy transition between wakeboarding and its nascent aerial counterpart.

"This has been an unqualified success, we could not have hoped for this to go any better than it did over the last two days," says Wypyszynski. "We hit everything we ever hoped we could, it actually got to the point that after the first couple of tests we sat there and were like 'Well now what do we do, it's going so well, what else can we get out of the test today, how much more can we figure out?' and really got a lot further than we thought we would get."

From here, the team plans to move onto real world testing behind real world aircraft in the real world sky. This next stage will play out across a few phases, beginning with helicopters without tail rotors, such as the MD-500 NOTAR or K-Max. A standard tow plane, such as a Piper Pawnee, will follow, which will allow the team to test out the takeoff and landing techniques.

These bookends to the WingBoarding experience are elements that Wypyszynski has put a fair bit of thought into. He ruled out the idea of having the rider dispatched from the aircraft when it is already airborne due to stability issues. Instead, riders will take to the skies the same way as a glider, with the board towed along in a rolling takeoff. Landing can play out a couple of ways, with the rider either freeing themselves from the board and parachuting back down to Earth or through a rolling landing similar to the way they took off.

Assuming this part of the testing goes to plan, the team will move onto more aerobatic pursuits, using a suitable aircraft to engage in rolls, inverted passes and formation flying. These first flights behind aircraft are hoped to kick off later in 2016 or early 2017, before the team takes the WingBoard on tour around the airshow circuit. While the company hopes to eventually sell WingBoards to individuals, they are also looking to build facilities where daredevils can pay for a single-flight experience similar to a skydive, and apparently at not much more of a cost.