Davide Scaramuzza and pals in the Robotics and Perception Group at University of Zurich have devised a new method called  Semi-Direct Monocular Visual Odometry for autonomous gps denied micro areal vehicle navigation. Using only a single downward-looking camera in combination with an Inertial Measurement Unit the team was able to achieve robust autonomous navigation with fast vehicle state update frequency and low cpu cost. The high frame-rate tracking allows the filter to converge even in scenes of repetitive and high-frequency texture (e.g., asphalt, grass), as it is best demonstrated in the video.

A video of their work in action:

The paper can be read here  http://rpg.ifi.uzh.ch/docs/ICRA14_Forster.pdf

Boeing sponsored research at  MIT where Agha-mohammadi and pals have developed a new algorithm based on Partially Observable Markov Decision Processes (POMDP) that allows self monitoring of the vehicles health status in real time and alternative pathfinding, accessing recharging stations and landing zones if needed during mission execution.  The paper will be presented the IEEE/RSJ International Conference on Intelligent Robots and Systems, in Chicago. Original article can be found here: 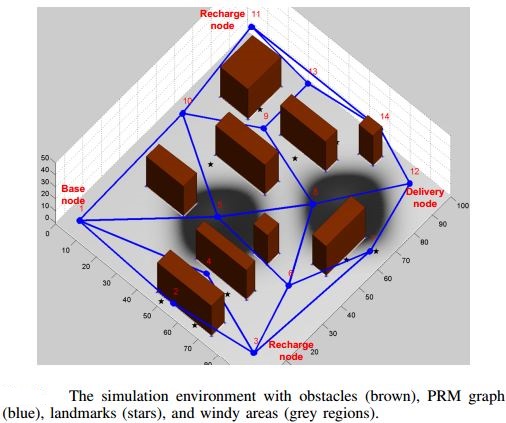 Censi and Davide Scaramuzza of the University of Zurich present the first state-estimation algorithm.robotic   In a previous experiment Kumar gauged the robots’ location using a battery of external cameras that captured 1,000 exposures a second.

Censi believes that his and Scaramuzza’s algorithm would allow a quadrotor with onboard feature event based neuromorphic sensorsto replicate Kumar’s results . The new algorithm’s first advantage is that it doesn’t have to identify features: Every event is intrinsically a change in luminance, which is what defines a feature. And because the events are reported so rapidly — every millionth of a second Thanks to Alexandre Karpenko and pals at Stanford University , they have published  open source  software under GNU General Public License that stabilizes video image and eliminates shutter roll (jello) . In their example they are using the iphones built in accelerometers to calculate correction in real time.  Check out the video !

further information can be found here :

Saw this fantastic story on BBC the other day.

Easyjet is developing drones to inspect its fleet of Airbus aircraft, and may introduce the flying maintenance robots as early as next year.

The drones will be used to scan and assess Easyjet planes and report damage back to engineers.

The flying robots are being developed by a team that includes experts from the University of Bristol.

Check out how Boeing uses Lidar to autonomously land a helicopter