Hi guys this is another late night post but I'll try to lay it out right.

I have updated the:

Thanks to Mr Doug Weibel my fears of complexity have been allayed and everything needed to get this going is in one config file. . As I have received interest I am releasing this before I have flight tested under the new APM2.1 release. My previous blog posts show my old camera setup with retraction and targeting but I now have a GoPro so its back to the drawing board.

Camera Sketch Download v1.10 (whenever I edit the file I'll increment - thanks to those wanting more)

Extract the zip file inside your APM2.1 folder with the rest of the sketches, add #include "Camera_Config.h" at the end of the header includes section in the ArduPilotMega.pde, add the do_control_video case in the handles_must void of the commands_logic.pde, add the verify_do_control_video case in the verify_must void of the commands_logic.pde and overwrite test.pde (it has a test for the camera servos).

(Click the picture at the top for an animation for where - not sure why its not doing it always though guess ning isn't gif friendly).

The variables in the config are fully commented so you can change them as you need. This works with all servos of limited range (<360) and the tilt servo only move to vertical so the picture is always the right way up.

Waypoint Triggering - Do something at a waypoint.

GPS Tracking - its only pointing at home still but with waypoint planning hopefully working this may be updated soon so it will actually be useful :) until then I wouldn't worry about it.

Add GPS_track(); to the fast loop of the ArdupilotMega.pde just before the } at the end.

Add cam_stabilisation(); to the fast loop of the ArdupilotMega.pde just before the } at the end.

With everything in your airframe and ready to test the connections to your servo setup and that you have configured it correctly use the test section of the CLI and use "camera". The test will:

I used the previous iteration (APM1.13) of this code happily but with the changes I may have borked it somehow. The config file can be changed by anyone and has details on what each variable means.

If you do not understand any of this do not use it. This is for those pushing the envelope.

Disclaimer: I have not flight tested this code yet, I nor DIYdrones take any responsibility for damage caused. 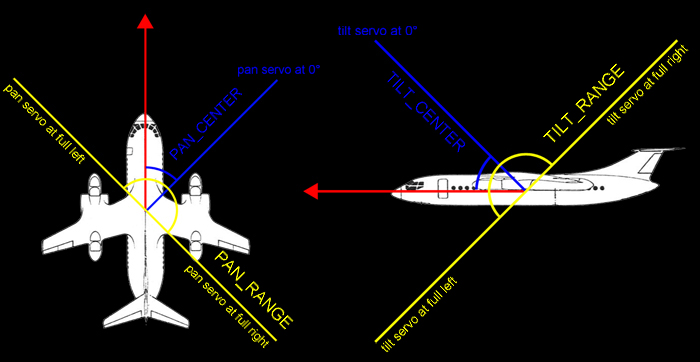