You are probably familiar with optical flow sensors which provide extremely precise measurement of ground speed (and therefore position) for quadcopters and computer mice.  The PX4FLOW is the most-recent example but there are many others. The optical flow sensor provides a 2D measurement of the angular speed of the image that is moving through its field of view, which is perfect for a mouse but by itself not that useful for a free-flying robot. It cannot differentiate between a near thing moving slowly, a far thing moving quickly, or its own camera rotating. Optical flow must be integrated with other kinds of sensor data for it to make sense in 3D space.

For those familiar with trigonometry, the diagram at right provides an intuitively-correct way of understanding how the various sensors are integrated, and how it can be possible to calculate an unknown value from known measurements.

So, given altitude from sonar, pitch rate from the IMU, and optical flow, we can calculate ground speed. 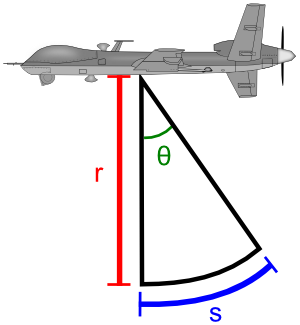 While helpful for visualizing the math, the trigonometric method is only actually correct at α = 0. At α = 90°, a and h hit infinity, which is obviously nonsense. To calculate the actual distance traveled, you must calculate the sum of the movement across point C, which, when you do the calculus, ends up being the exact same formula used to calculate the length of the curved section of a circle segment. I've illustrated this with the second diagram at right.

It might seem that adding that curve to the equation has hopelessly complicated things, but in reality it makes the equation simpler, with no trigonometric functions at all. If I take out the obvious unit conversions, it looks like this:

A problem, and a solution

In the above formula altitude is a known value directly measured by sonar. Sonar works well in quadcopters and other craft which fly in a hover regime, but tends to be much less reliable in planes, where accurate AGL measurement is probably even more important, especially for landing.

Thus, we have a reliable and accurate measurement of altitude which works at even greater range than sonar.

Work to be done

The new PX4FLOW has its own sonar altimeter and gyros and performs all sensor integration internally. To add ground speed as an input and altitude as an output, one of the following will need to occur:

The second option is the winner in my opinion, as it enables drop-in use of less complex optical flow hardware. I really don’t understand why a redundant IMU was placed on the PX4FLOW in the first place.

Please note that I’m not in a position to do this work myself. My own plane does not have any optical flow sensor, and probably won’t for a long time.  I’m OK with hard landings. I’m just offering the math that you’ll need to implement your own.

You may find that your optical flow sensor stops sending intelligible data as the ground gets close. This problem is also encountered with sonar, which has a minimum measurable distance due to the sensor deafening itself while generating the same sound that it needs to listen for. Optical flow fails for a different reason. If we solve for a different unknown we can see why:

As altitude approaches zero, optical flow will approach infinity. I don’t know the limits of the PX4FLOW (and I don’t have one to test) but I assume the limits are lower than you would want. There are several solutions to mix and match: