I'm using an LSM303DLM on a Pololu MinIMU-9 board as part of an AHRS. The software is ported to mbed from Pololu's example code which is in turn ported from ArduPilot 1.5. But that's no what this is about.

This is a saga of one man... with meager math skills... in a desperate fight to calibrate his compass... it's a timeless tale of truimph and defeat...ahem.

Actually, this is mainly a story about soft-iron calibration.

In attempting to calibrate my compass, plain hard iron (offset) and gain calibration didn't help as much as it has on other sensors in other configurations. I wondered why.

And am using Yury Petrov's Ellipsoid_fit (download) in Octave to attempt to figure out how to calibrate for hard and soft iron offsets. The hard iron offsets are ridiculously easy of course. It's the soft-iron stuff that's frying my feeble mind. :) 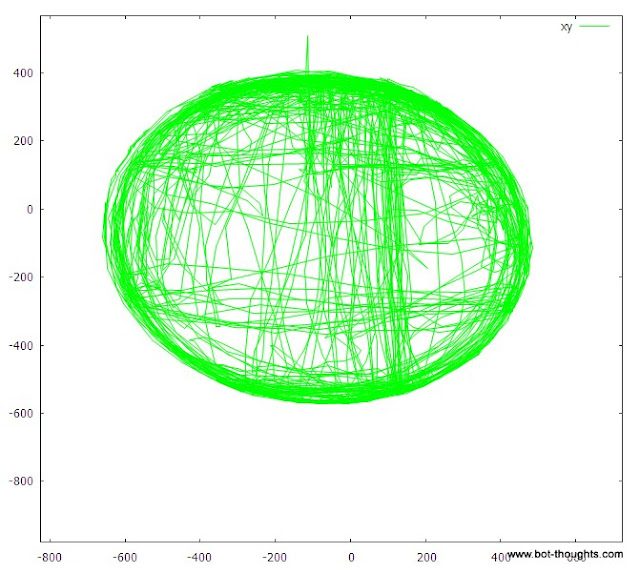 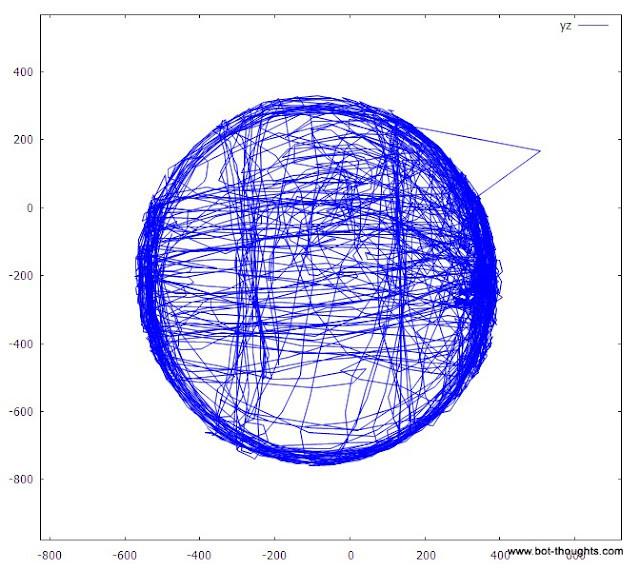 The XZ axis is another story. And yes, I've removed nearby ferrous objects to no avail. 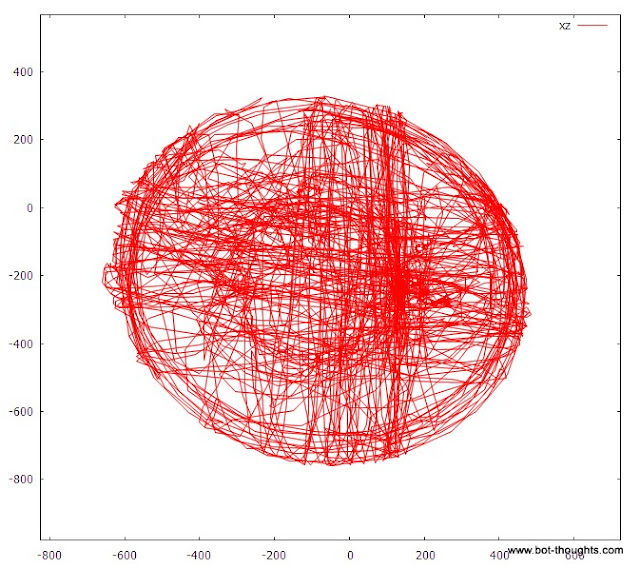 Ellipsoid_fit says the eigenvectors (apparently these are the 3 axes of the ellipsoid) reported are:

I'm still working out how to figure out the tilt of the x-z ellipse.

Another script, fit_ellipse by Ohad Gal (download) -- it's a 2d fit -- reports approximately -25 degree tilt (for some reason I had to correct x axis mirrored between the two plots; stretched out to resemble the x-z plot above) I don't think the tilt estimate is accurate.

The tilt estimation at least for this latter script is quite sensitive to axis gain. Hm.

I've been trying to wrap my head around the math involved in soft-iron calibration and found a few particularly good articles (several more that are, I think, difficult). I guess the main point is to have a soft-iron compensation matrix involved. Calculating the matrix eludes me as yet.

I've also read a paper or two on swinging a compass (as done in the airline industry) and I'm keeping that approach in my back pocket.

I'd happily ignore soft-iron as I've done in the past but even with offset and gain calibration the sensor is pretty clearly inaccurate at various orientations and I have convinced myself that it's due to soft iron distortion.

If you skip ahead to this reply, it talks about the approach used for soft-iron calibration and shows that, yes indeedy, it seems to be working at least on paper.