So after reading through the comments on this post, it got me thinking about the possibility of using the MinimOSD, or soon to be released jDrones MiniOSD, on the ground to have one less item up in the air. The appeal of keeping the aircraft light and a little less expensive, in the case of a flyaway or bad crash, makes me think this could be a good idea for those of us that have a more restrictive budget for UAV's.

Doing further research into what I need to get to be able to use an APM2 with an OSD, I decided to eventually buy the MinimOSD when I have the funds (or jDrones MiniOSD if it gets released). I then found this post about how the code was ported over to another different OSD hardware.

Then I remembered that I have one of these in my box of stuff I haven't gotten around to doing anything with. 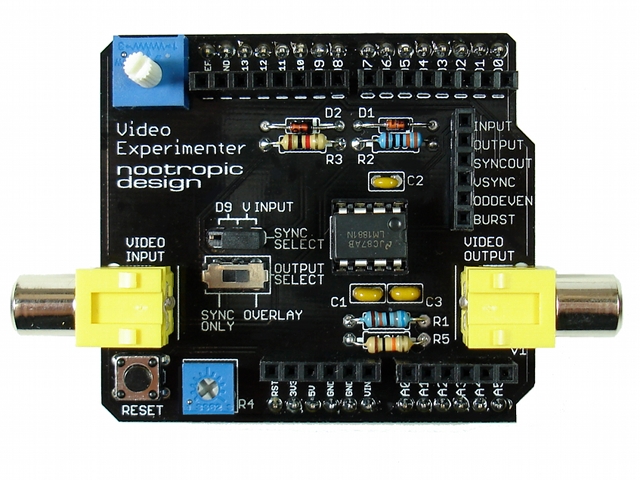 There are many more capable people than me that could probably do this but how difficult would it be to take the code that runs on the MinimOSD and port it over to Arduino to run on the Nootropic Video Experimenter shield? The guy that produces these shields did a nice write up of displaying GPS data using this shield so it seems like it would be possible to do something similar.

Using this set of hardware, you could easily interface it with the video out of the video receiver in between the receiver and goggles/LCD and then tap into the ground station XBee to pull out the telemetry stream. Would it be difficult to port the code over? I've never done something like that before so I'm curious to find out if this is something that would be useful in any way so I have one less thing that could go wrong in the air.